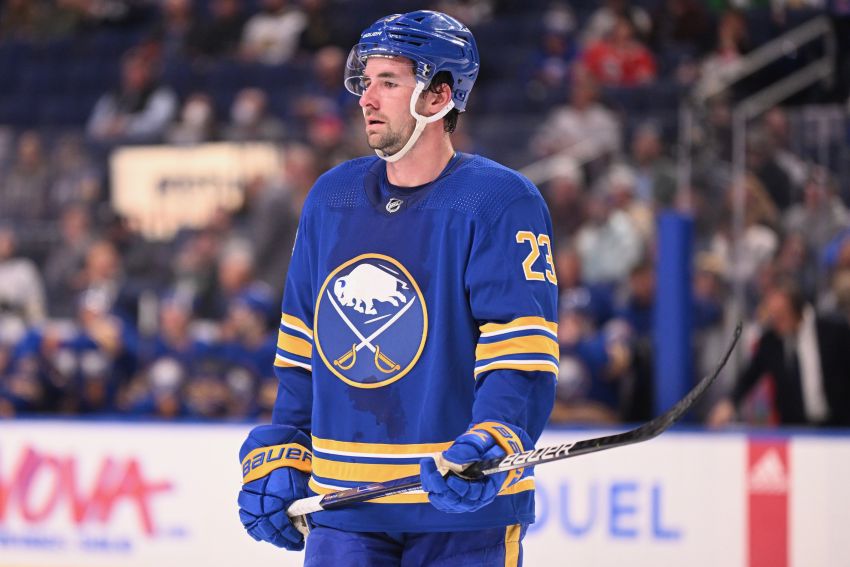 BUFFALO – On some teams, injured players are rarely seen. They do their work before many of their teammates arrive at the rink and quietly leave.

Then there’s Mattias Samuelsson. For more than three weeks, as the Sabres defenseman has rehabbed from a lower-body injury he suffered Oct. 22, he remained a visible presence in the dressing room and during practice.

“You saw him every day sitting on the bench in practice and around the guys,” Sabres coach Don Granato said after Samuelsson was a full participant Tuesday’s morning skate at KeyBank Center.

Clearly, the 6-foot-4, 231-pound Samuelsson, 22, is very anxious to play. If he responds well when he joins regular practices in the coming days, he could return within two weeks, according to the team.

“Just being back out with the guys is always fun,” Samuelsson said prior to Tuesday’s 5-4 loss to the Vancouver Canucks. “You feel part of the group again, part of the jokes and stuff. So, yeah, it lifts my spirits a lot.”

The Sabres have sorely missed Samuelsson, who averaged 19 minutes, 35 seconds of ice time in his five outings before what he called “a freak fall.”

When the American went down in the Sabres’ 5-1 road win in Vancouver, it looked like his season could be over. Later that night, however, the Sabres received good news.

“I feel like I have a pretty high pain tolerance, so when I was laying on the ground in that much pain, I think I’m (thinking) the worst,” said Samuelsson, who has missed the last 10 games. “But by the time I got in the locker room, took my gear off and got it checked out, it was feeling a lot better.”

Riley Sheahan, who on Tuesday morning was recalled with Anders Bjork from the Rochester Americans, made his season debut, centering the fourth line between Rasmus Asplund and Vinnie Hinostroza.

They received positive news after Quinn, who was hit with the puck in the head on Saturday, underwent imaging. He has been upgraded to day to day. They originally thought he wouldn’t play this week.

Sheahan, 30, and Bjork, 26, both began the season on Buffalo’s roster before clearing waivers and being assigned to Rochester.

In just his second stint in the minors in 10 seasons, Sheahan, 30, registered three assists in six outings with the Amerks. In his first assignment to the AHL in three years, Bjork, 26, compiled three goals and six points in 11 games.

Following a season with the Seattle Kraken, Sheahan, who spent all of 2020-21 with the Sabres, signed a one-year, two-way contract with Buffalo on Aug. 10.

“It’s hard,” said Sheahan, a native of nearby St. Catharines, Ontario. “When you’re an unrestricted free agent, everyone likes to think you have so many options. For a guy like me that’s sort of fighting to stay in the league, it’s tough and it can get pretty stressful.

“When we had the opportunity to sign here, it was kind of a no-brainer. My family was close by and they didn’t get to come during the COVID year with the borders closed. All those reasons kind of played in, and it was an easy decision.”

Sabres defenseman Henri Jokiharju, out since suffering an upper-body injury Oct. 20, returned Tuesday. With the Finn back, the Sabres scratched Casey Fitzgerald.