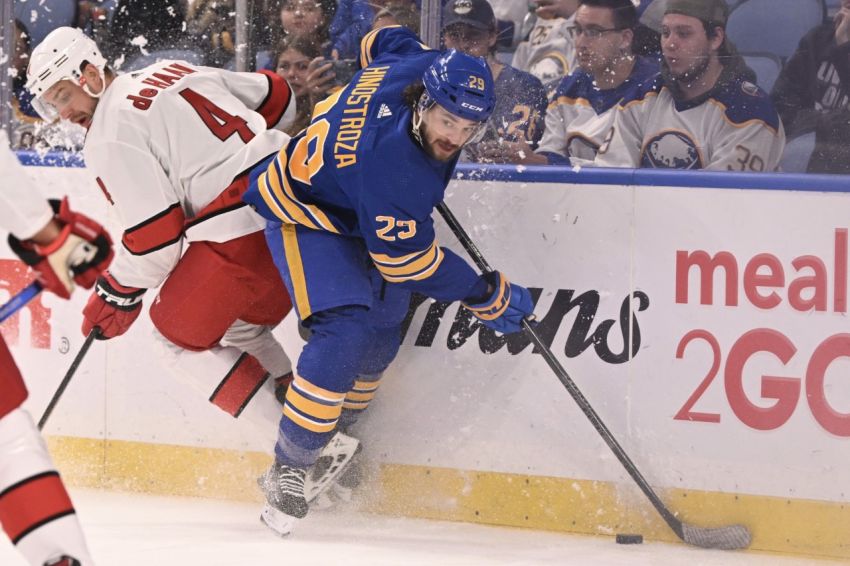 Vinnie Hinostroza re-signed with Buffalo during the summer. ©2022, Micheline Veluvolu

Early in the 4-2 win over the Carolina Hurricanes, Hinostroza grabbed a nifty pass from Skinner high in the slot and roofed a shot in as he zoomed to the net.

On Wednesday, the Sabres, having lost Kyle Okposo to an upper-body injury, moved Hinostroza to the veteran’s spot at right wing with center Rasmus Asplund and Zemgus Girgensons.

A year ago, as the Sabres began rebuilding, they signed several low-cost veterans to fill out the roster. While most of them contributed, they essentially served as placeholders for a year until some of the organization’s prospects developed.

The Sabres re-signed just two of those free agents – Hinostroza and goalie Craig Anderson – during the offseason.

Hinostroza, 28, showcased growth last season, registering 13 goals, including 12 at even strength, and 25 points in 62 games while being utilized all over the lineup. He can also kill penalties and play on the power play.

Coach Don Granato said Hinostroza’s versatility was a significant factor in the Sabres’ decision to award him a one-year, $1.7 million contract on July 12.

Hinostroza, whose affable personality and energetic nature make him a popular teammate, said there “was never a doubt in my mind I wanted to come back.”

“I just love the group of guys we have here,” he said. “I think we could doing something special and I really want to be a part of it.”

If Okposo is healthy or the Sabres keep some rookies, he could be the odd man out as the 13th forward. Or he might skate on the third or fourth line like he did much of last season. If one of the team’s top threats is injured, he could be shifted to a scoring line.

Wherever the 5-foot-10, 183-pound Hinostroza plays this season, he plans to showcase the same style.

“Earlier in my career, when you switch lines, you kind of think you have to change your game depending on who you play with,” he said. “And that’s definitely not the case in this league. I think the way I play with energy, speed, tenaciousness, I play hard, so I’m just trying to bring the same thing every day, whether I’m playing with Skinny and Tommer or Girgensons and Asplund.”

The consistency Hinostroza strives for illustrates some of his development since he played for Granato with his hometown Chicago Blackhawks in 2017-18.

“He has made himself a better hockey player over the last four years and really quite a bit over the last year,” said Granato, whose Sabres close the preseason tonight on the road against the Pittsburgh Penguins.

Sometimes Hinostroza said he will occasionally catch one of his old games and see himself “going 100 miles per hour all the time.”

“Just wanted to make it in the league,” he said. “Every shift was 100 miles per hour, chasing around, finishing checks.”

But last season, Hinostroza said he became more comfortable picking his spots. He learned he doesn’t have to go full blast every shift and grasped he wasn’t going to score every time he touches the ice.

“Now it’s like, OK, at best I’m going to get two scoring chances today, and who knows what shift they’re going to come on,” he said. “So I have to be good defensively, not worry about offense and then when something happens where you can jump, you use your speed and energy.”

Granato said in Hinostroza’s early days with the Sabres “his energy sometimes controlled him.”