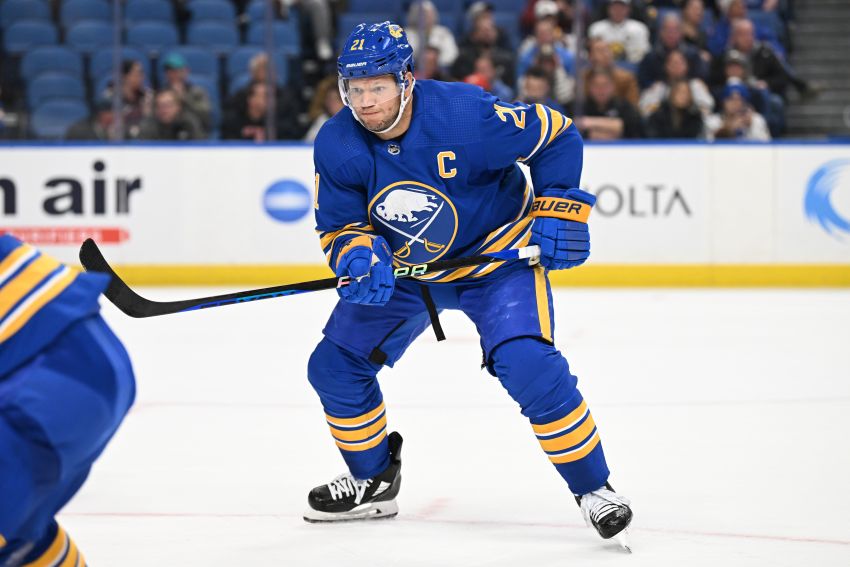 BUFFALO – As Sabres captain Kyle Okposo struggled through the first week of the season, he tried to keep a strong perspective and any negative thoughts to a minimum.

Okposo, 34, wanted to give his mind a break during a hectic time. An upper-body injury had sidelined him during the final days of training camp, costing him valuable preparation time as he began his 17th NHL campaign. He had also just been named the 20th full-time captain in franchise history.

The veteran winger, fresh off a terrific 21-goal season, told himself everything would turn as long as he worked.

“I just tried to put my head down and make sure that I was focusing on the things that I need to do to make sure that my game was good,” Okposo said following Thursday’s practice at KeyBank Center.

Still, his weak production – he mustered just one assist and four shots on goal in his first four outings – got in his head a little bit. Was age finally catching up to him?

“First five (games) I was really trying to find it,” he said. “Those questions start, like, ‘Oh man, you still have it?’ You start questioning kind of everything. But missing some time in camp definitely doesn’t help.”

Okposo enters tonight’s road contest against the Carolina Hurricanes enjoying his best stretch all season. During the Sabres’ three-game winning streak, he has consistently created offense, scoring his first goal this season and five points.

The American said he had no idea he was playing through his injury during the preseason.

For about week, Okposo said wasn’t his normal self. But having just earned the captaincy, he wasn’t about to miss opening night.

“I wanted to make sure that I was back for that first game,” he said. “I mean, nobody was going to tell me no. If it was in December, maybe I’d take an extra couple days and make sure that it was all the way. But really wanted to be out there for opening night. Just a little setback but nothing crazy.”

The 6-foot, 218-pound Okposo has slowly built his game over the past two weeks. He said he started to turn the corner Oct. 22 against the Vancouver Canucks. When the Sabres returned home Oct. 27 to play the Montreal Canadiens, he said he finally felt like himself.

After Granato promoted Okposo to right wing on the top line late in Saturday’s 4-3 overtime win against the Chicago Blackhawks, he ignited the Sabres’ comeback, assisting on both of center Tage Thompson’s third-period goals.

Okposo added two more assists in Monday’s 8-3 win over the Detroit Red Wings. He scored in Wednesday’s 6-3 against the Pittsburgh Penguins, potting an empty-netter to put the Sabres up two goals.

“My game’s been pretty good, I think, over the last five, I would say,” Okposo said. “… It just took a little bit longer, but I really like where I’m at. I feel relaxed out there, I feel like I’m in a good spot. I feel like it was definitely building toward that. It’s just nice to get the bagel off the score sheet.”

Okposo scored thanks to winger Zemgus Girgensons’ dogged effort to negate an icing. He raced down from the Buffalo zone, beating Kris Letang to the puck after defenseman Rasmus Dahlin’s long lob at the open net. The Latvian then fended off three Penguins along the end boards and lost his helmet before getting the puck to Okposo.

“It was funny, right when he shot the puck, I saw Z and I knew he was going to beat it, because just knowing Z, it was just awesome, just quintessential 28 doing what he does for us,” Okposo said. “For him to battle like that, kill time, helmet pops off, goes hard to the bench, those 20 seconds sum Z up, who is as a teammate and as a competitor.”

Having been teammates for seven seasons, Okposo has developed a special appreciation for Girgensons’ work ethic. The friends have spent much of the season as linemates.

Since Saturday, Okposo has mostly skated with Thompson and Jeff Skinner. But he also took some shifts late Wednesday with center Dylan Cozens’ line and, of course, Girgensons.

Okposo feels the Sabres have reached a stage in their maturation where all of the forwards can play with each other.

“We’ve all been here long enough now where we know each others’ tendencies,” he said. “I think I have a pretty good handle on what everybody’s going to do. So it’s a lot of fun to play with everybody. I love that about our team is that there’s not just lines that stay together and are going to be staples for 50 games in a row. Everybody can kind of play with everybody depending on the night.”

Girgensons took a beating for this goal to happen, not to mention the hustle to get down the ice. Kyle Okposo, ENG 5-3 #LetsGoBuffalo #LetsGoPens pic.twitter.com/41qxjV60c7