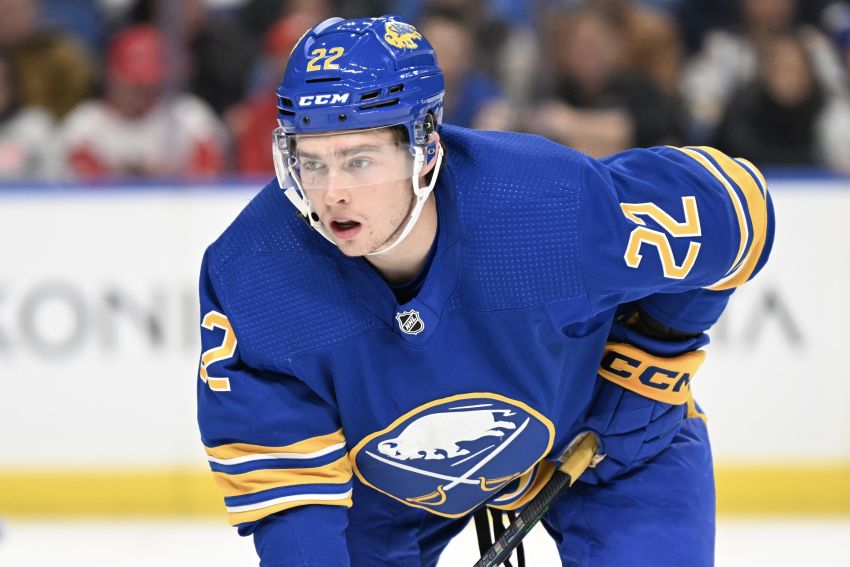 Jack Quinn has showcased rapid development over the past several games. ©2022, Micheline Veluvolu

BUFFALO – The genesis of Jack Quinn’s quick turnaround can be traced to, of all places, the press box in Edmonton. It was there following two weak outings that the rookie winger sat out the first of two games as part of the Sabres’ forward rotation.

Quinn, 21, looked overwhelmed after cracking the big club out of training camp, failing to make any early impact. So Sabres coach Don Granato said they scratched the youngster so he could “catch his breath.”

While sitting out and studying the action, Quinn said he learned he needed to “turn up my compete level a little bit” and develop a better understanding of how Granato wants the Sabres to play.

Granato, whose Sabres host the Pittsburgh Penguins tonight, often compares Quinn’s ability to target areas he must improve to a “homing torpedo.”

“He can recalibrate and figure it out,” Granato said hours before Quinn scored his first goal this season in Monday’s 8-3 shellacking of the Detroit Red Wings at KeyBank Center. “It’s amazing how he came back in the lineup. He looks like a new player with new energy.”

Quinn has looked much more engaged over the past five games, creating offense and utilizing his 6-foot-1, 185-pound frame.

“He has reached another level, probably a couple,” Granato said. “It’s a credit to him, his talent. A little bit miraculous where he looked like things were challenging him in different areas, offensively and defensively.”

On Monday, he put the Sabres up 2-1 5:22 into the second period, scoring bar down from the bottom of the right circle after center Tage Thompson fed him a nifty backhand feed.

Then seconds after taking a hit off the ensuing faceoff, he hip-checked Lucas Raymond in front of the Buffalo bench, knocking the Detroit winger to the ice.

“When you’re into the game, engaged and opportunity like that presents itself, you don’t really have to think about it, you’re just competing and making a play,” Quinn said following Tuesday’s practice. “And that’s kind of what that one was. He kind of left himself open so I was able to finish my hit.”

Sabres captain Kyle Okposo said: “I love after he scored he gets hit off the draw then gives a big hit. He’s just been engaged.”

On Monday, Quinn pumped a season-high five shots on goal while playing 13 minutes, 32 seconds. He has registered 10 shots in the last three games. Incredibly, he did not record a shot in his first four contests. He did, however, have a goal called back Oct. 25 against the Seattle Kraken following an offside review.

Overall, his 59.2 percent Corsi For ranks first among Sabres regulars.

“He looks way more confident than he did his first couple games,” Granato said Monday morning. “We just talked about it even watching him in the morning skate, he’s up on his skates, he’s more attentive and as a result you see the skill, the talent coming out. So, yes, he has made immense strides in the last couple weeks.”

Quinn, of course, doesn’t lack confidence. He scored 52 goals in his final junior season and 26 times in only 45 games as a rookie with the Rochester Americans last year.

As an elite scorer, he can feel when he’s close to breaking out.

“You can kind of tell when you’re playing well and getting chances,” said Quinn, the eighth overall pick in 2020. “You know it’s going to come and I kind of felt that.”

Feeling the puck more over the past week has also helped Quinn take significant steps. Granato recently moved him to the top power-play unit, another opportunity for him to become more involved.

“It helps,” Quinn said of his increased touches. “I think as an offensive player. when you can be out there in those situations, be in those moments in the offensive zone around the net, you’re going to gain more confidence.”

Notes: Granato said Sabres defenseman Rasmus Dahlin, who has averaged 25 minutes, 23 seconds of ice time through nine games, had a maintenance day Tuesday. … The Sabres are scheduled to wear their new white Reverse Retro alternate jersey for the first time tonight. Players have been breaking in white gloves and pants in practice. … Okposo has tallied two assists in each of the last two games, the first time he has registered at least two points in consecutive outings since he had multiple points in three straight contests from Jan. 9 to 18, 2018.

Tage using his big frame to protect the puck, gets it to Quinn, 2-1 #LetsGoBuffalo #LGRW pic.twitter.com/eOu9QqbJjb

Quinn took a hit off the draw and gave it right back a few seconds later #LetsGoBuffalo #LGRW pic.twitter.com/hxh27dZwUv