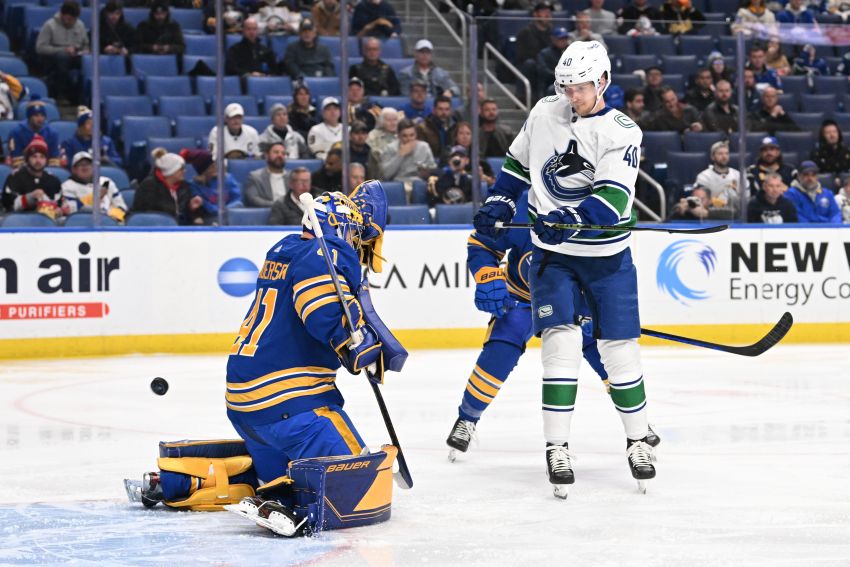 BUFFALO – This long Sabres losing streak felt a bit different than previous ones prior to Tuesday’s 5-4 loss to the hapless Vancouver Canucks.

The Sabres dropped four games to legitimate Stanley Cup contenders, playing each of them tough. Even their one loss to a non-playoff team, Arizona, didn’t look so bad after the Coyotes defeated some formidable opponents following their visit.

But losing to the Canucks, who limped into town having lost 12 of their 16 games this season, including three straight, stings.

Against a team they defeated 5-1 last month, the Sabres fell in a 2-0 first-period hole before rallying to make the game interesting.

Still, the were simply too easy to play against early. A visibly agitated Don Granato said they took too long to showcase desperation.

“We can sit here and ask why, why, why?” the coach said following the Sabres’ sixth straight loss. “It has to change.”

He added: “Too easy out of the gate. That is a big lesson that needs to be learned now. Period.”

Granato said he takes nothing from the Sabres’ third-period surge, when they pumped 15 shots on Vancouver goalie Spencer Martin and crept within one when center Casey Mittelstadt scored.

“It’s tough to take anything from the third when you start and basically lost the game through the first 20 or so minutes,” he said.

Two weeks ago, the Sabres won their third straight game, improving to 7-3-0. After years of futility, it looked they had established themselves as a strong playoff contender in the crowded Eastern Conference.

Today, they’re 7-9-0 and rank seventh in the eight-team Atlantic Division. Only tonight’s opponent, the Ottawa Senators, is below them.

The Senators have lost eight of their last nine contests and recently ended a seven-game losing streak.

Perhaps getting away from KeyBank Center, where they’ve lost four straight games, can help the Sabres. Tonight kicks off a three-game Canadian road trip.

“We have an opportunity now to go on the road for a bit,” said winger Jeff Skinner, who scored the Sabres’ first two goals. “Maybe that gives us a chance to be a little bit more simple with our game and get to that desperation earlier.”

The Canucks had their way in the first period, getting goals from Dakota Joshua and at 8:01 and Ethan Bear at 9:18 before the crowd of 11,130 fans. Skinner scored at 11:15 before Vancouver’s Elias Pettersson made it 3-1 31 seconds into the second period.

“We looked a little rattled in the second for a bit before we got to our game,” Granato said.

While none of the goals can be pinned on goalie Craig Anderson, did Granato consider yanking him for a spark?

“We had desperation in the third period,” Tuch said. “We came out and thought that they were going to make it easy on us. They’re a team that’s going to come in here and battle. They’re struggling just like us and they want to win hockey games. They got a couple of bounces early in the first and put us on our heels, and it took us all the way until the third period to recover.

“It’s a learning experience. We’re going to continue to learn together but we have to be better.”

This is the Sabres’ longest losing streak since a six-game skid from Feb. 17 to 27.