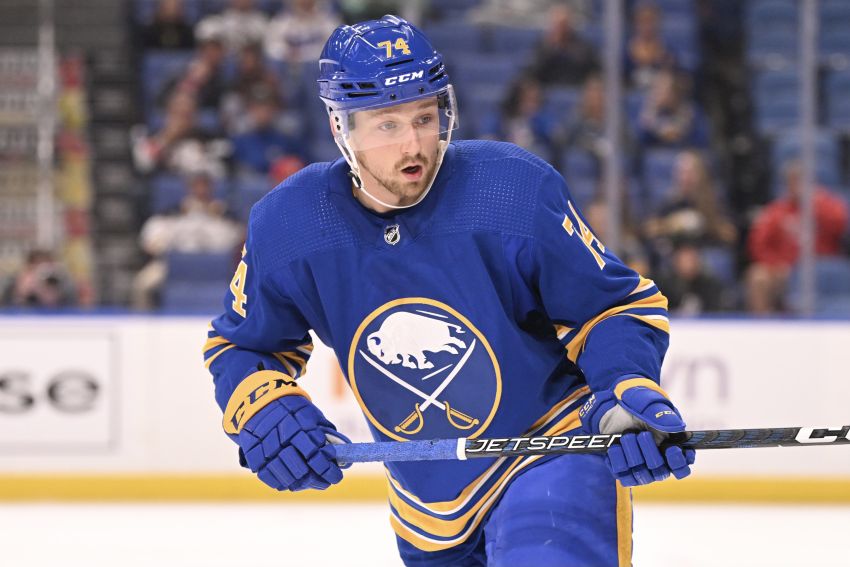 Asplund, 24, carried the confidence he generated during his first full NHL season into the World Championship, seizing a starring role in Tampere, Finland.

Over two weeks, he morphed into a first-line winger and his country’s most utilized forward, scoring six goals in eight games.

“When you’re playing big minutes, sometimes you get that good feeling and you can just roll, kind of like ride that wave a little bit,” Asplund said following Saturday’s practice at KeyBank Center. “I had a great season last year, too, and I just tried to take that feeling into the tournament.”

Granato, an assistant coach for Team USA, enjoyed keeping close tabs on Asplund and the other Sabres in Finland.

The 5-foot-11, 185-pound Asplund’s performance ranks as perhaps the most surprising of the bunch.

“I couldn’t wait to go back and watch him the next time,” Granato said. “It helps you formulate as well what components of that can transcend that into the NHL. I think there’s a lot still for him that we’ll see him become an even better NHL player.”

He added: “You can see, knowing all the work he’s put it and puts in, knowing how intelligent a player he is. He really thrived.”

In 2021-22, his fourth year in North America, Asplund established himself as an NHL regular, averaging 14 minutes, 17 seconds of ice time over 80 games, both career highs.

As he spoke inside the dressing room Saturday, his excitement for the upcoming season, which opens Thursday, could be heard in his voice.

“Everything clicked a little bit and I think I got rewarded a little bit for the work I’ve been putting in the last couple years,” Asplund said of last season. “I just want to take another step like that this year. I’m gonna try to keep that good feeling and do my best with it.”

Still, Asplund struggled at times last season. After scoring four times in his first eight outings, he endured a 46-game goal drought. He finally scored again on March 27, his first since Oct. 31, and finished with eight goals. In 2020-21, he scored seven goals in just 28 contests.

Asplund, of course, believes he has another level he can reach offensively.

“I scored eight goals last year,” he said. “I think that’s not enough for the type of player I am. I want to get at least five or six more goals out of me this year. And, obviously, I need to take another step to get to that level.”

To reach that level, Asplund said he understands he must have a higher standard “night in and night out, practice in and practice out.”

“I had a couple dips last year that I don’t want to have this year, and I … (want to) always be that guy that you know what you’re getting off of every game,” he said.

Granato stuck with Asplund every game last season, refusing to scratch him. On another team, he might’ve spent a few nights in the press box.

“You just feel that trust, you feel that they trust the game you’re playing and trust the things you do out there,” he said. “And … for a player like me, I feel it helps a lot. And they’ve always been really good with me off the ice, too, showing me clips, pushing me to be better every day.

“That’s just the way Donny is, I guess. He’s just a great coach with that, and he just keeps pushing you to get better. That trust I’ve been having is huge for me.”

Granato trusts Asplund so much he recently moved him back to center, his natural position, between Zemgus Girgensons and captain Kyle Okposo. Asplund spent most of last season playing wing.

“I want to be that type of player that Donny knows what he gets from me if I’m center or winger,” Asplund said.

“He’s a guy,” he said, “that’s relentless in the pursuit of being better.”