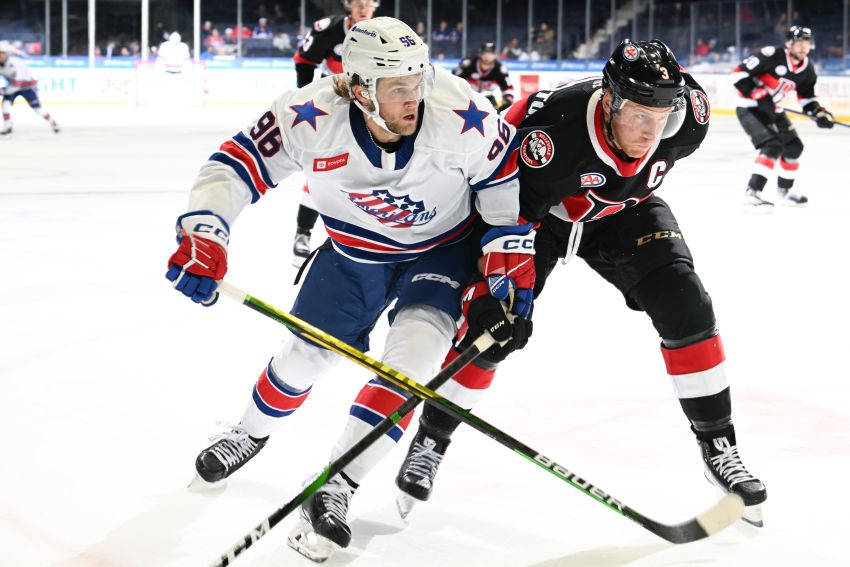 Having served as the Sabres’ 14th forward before clearing waivers on Tuesday, he hadn’t played in 12 days. He joined the Amerks the morning of their 4-3 win against the Belleville Senators, participated in a short skate and was thrown into the lineup.

Not surprisingly, Bjork, a veteran of 211 NHL games, struggled at times to win battles and complete plays he said he believes he’s capable of making.

“One of the hardest things to do is play the game he played tonight,” Amerks coach Seth Appert said following the game at Blue Cross Arena. “He hasn’t played at all, he gets sent down, hasn’t practiced with us, all those things. And (he) just handled it with such class, he had such a great attitude and he got through it, it wasn’t perfect.

“But I think at the end of the day, he got rewarded for staying the course, just sticking with it. Just really happy for him that he got to earn that moment.”

That moment materialized 3:29 into the extra session, when Bjork grabbed Kale Clague’s pass at the bottom of the left circle and beat goalie Kevin Mandolese.

The goal, just Bjork’s second in his last 33 games dating back to Dec. 14, can be used as the confidence-builder he sorely needs following his demotion.

“I wasn’t super pleased with my play overall, but the goal at the end definitely felt good and I think it’s definitely heading in the right direction for me personally,” Bjork said.

Bjork, 26, regressed much of last season, morphing from a regular into a spare part. Late in the year, he sat out 17 straight games as a healthy scratch. When he did play, he often skated short minutes on the fourth line.

This season, the Wisconsin native failed to stand out in training camp, and it appeared his days in Buffalo were numbered.

On Monday, before the Sabres departed for their four-game road trip, they waived him.

The 6-foot, 197-pound Bjork understands he has reached a crossroads in his career. Since leaving Notre Dame in 2017, he has mostly played in the NHL. Wednesday’s game marked his first AHL appearance since Oct. 19, 2019 and just his 30th overall.

He impressed the Boston Bruins so much he earned a three-year, $4.8 million contract in 2020. After the Sabres acquired him in the Taylor Hall trade late in the 2020-21 season – they essentially swapped center Curtis Lazar for Bjork – he received regular duty for nearly a year.

“It’s a little tough going from being sent down, going from the NHL down,” Bjork said. “But how I view it is you can always get better as a hockey player, no matter (if) you’re old, young, whatever. This is an opportunity to do that. It can be the best thing to happen to me if I have the right attitude and put in the right work ethic.”

Before Bjork left Buffalo, he said general manager Kevyn Adams and coach Don Granato told him he needed to play games and get his “mojo back.”

“Which I totally understand,” he said. “That’s what I’m here to do. I think they thought confidence-wise I wasn’t at my best a little bit and I could improve upon that.”

They also let Bjork know he could have a future in Buffalo.

“I’m going to have to prove that belief a little bit, but they did tell me, ‘We still believe in you, you can be a big part of this organization,’ and I appreciated that a lot,” said Bjork, who spent much of Wednesday’s game skating at right wing beside center Linus Weissbach and Brett Murray.

So what does Bjork want to focus on with the Amerks? For starters, he knows he must play more aggressively.

“Hunting pucks all over the ice, creating turnovers that sort of thing, using my speed and quickness to sort of disrupt plays, that’s a big part of it,” he said. “And … with the puck, I think we discussed just using my instincts and using my speed and quickness and holding onto the puck and being confident with it. A big part of it is to be more confident and poised with the puck.”

When Bjork cleared waivers, Appert said he called him and told him to “come down and have fun.”