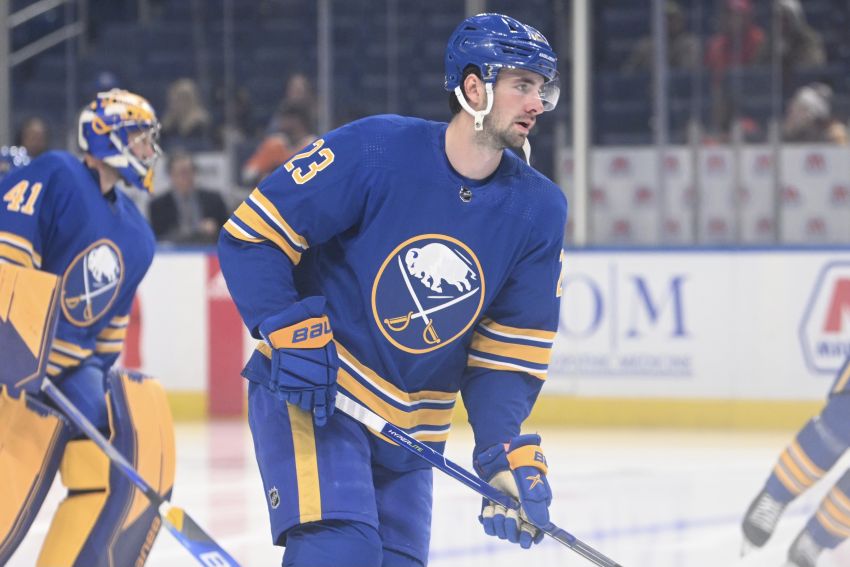 BUFFALO – The sample size is small, just 54 games over parts of two NHL seasons. Still, it was enough to convince the Sabres that defenseman Mattias Samuelsson deserved a seven-year, $30 million contract extension.

But the Sabres don’t feel it’s a risky move. In the 6-foot-4, 227-pound Samuelsson, a top-pair defender, they believe they possess a special talent.

“One word I’ll use to describe it,” Granato said of the Sabres’ belief. “He is the antidote. So if you think of a star player on the other team, he’s the antidote. He is an athletic beast – his mobility, agility, his size, his strength. He has a great feel for his position, a great feel for the game. So he closes on people quick. He defends well. That’ll make the other defensemen on our team jobs much easier.

“He was significant in impact when he arrived last season in January … and very few guys are impact upon entry in the NHL. He was from Day One. And that’s a testament to not only his present ability, but his potential.”

In tonight’s season opener against the Ottawa Senators at KeyBank Center, the Sabres will likely utilize Samuelsson, 22, beside Rasmus Dahlin.

A year ago, a lower-body injury Samuelson suffered in rookie camp cost him a spot in the opening night lineup. When he healed, the Sabres sent him to the Rochester Americans for more seasoning.

Following his arrival in mid-January, he played a huge role in the Sabres’ strong finish, averaging exactly 20 minutes of ice time over 42 outings.

“I can’t wait to play with that guy,” Dahlin said. “He’s such an amazing player, but also such an amazing guy. I’m very happy he signed long term here. We’re going to have a lot of good years.”

“He’s loved in the locker room,” he said. “He brings a unique element to the element to the blue line that we think is really critical for us moving forward. Just feel like he’s the type of person that’s gonna keep working to get better and better.

“You guys hear me talk about that all the time and he wants to be here. He’s made it clear this is a place I want to play and we’re excited.”

Clearly, Samuelsson fits in as well off the ice as he does on it. He’s part of a new core of young players that often talk about how close they’ve grown over the past year.

“It’s just so much fun to come to the rink every day,” said Samuelsson, a second-round pick in 2018, 32nd overall. “You wake up every morning and your body’s hurting like everyone else, but you’re just excited to come to work with everybody and get better. I mean, I love the game, I love coming to the rink every day and trying to get better. It’s just kind of a weight lifted off my shoulders. Now I can just play with the guys in this room and not worry about anything.”

Entering the final season of his entry-level contract, Samuelsson, who hasn’t scored an NHL goal, said his new contract is “a lot to process.”

“I don’t know if I’ve fully taken it in yet, but I’m super grateful for the Pegulas, Kevyn Adams,” he said. “I’m excited for what it means for my family.”

In the coming years, the Sabres must award more hefty contracts to their core players. Right now, they have the most salary cap space in the league, a whopping $18,648,333, according to capfriendly.com.

That figure, of course, will shrink over the coming years. Next year, Samuelsson’s deal and center Tage Thompson’s seven-year, $50 million contract kick in.

“I don’t put a ton of thought into (our cap space) because this is exactly, when we put our plan together, the vision of what we’re doing moving forward, this is exactly where I expected us to be,” Adams said. “We didn’t want to go out and make moves in the offseason that maybe we could’ve done in free agency or trades that we’re taking a (Jack) Quinn or (JJ) Peterka out of the lineup.”