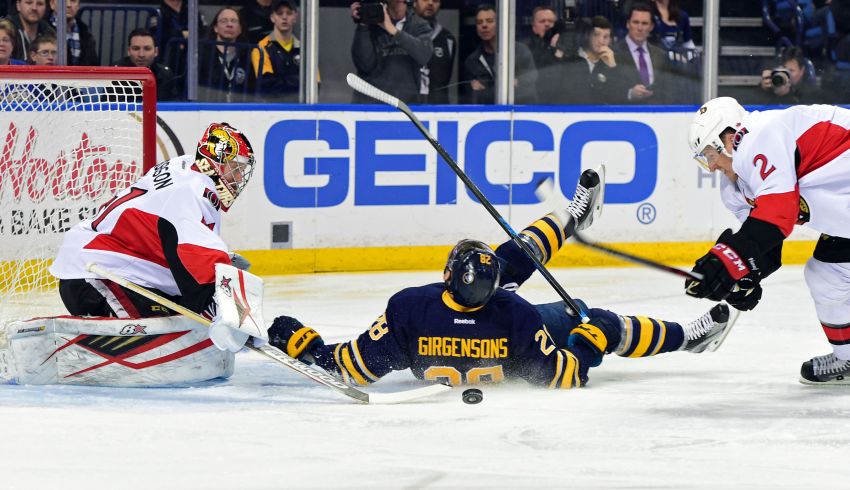 BUFFALO – The Sabres team that will convene today for training camp physicals, the official start of the 2016-17 season, isn’t much different from the one that just finished seventh in the Atlantic Division.

Sure, there were some notable summer additions. Winger Kyle Okposo, who signed a seven-year, $42 million contract July 1, was arguably the best free agent available. Dmitri Kulikov gives the Sabres a sturdy veteran to skate beside No. 1 defenseman Rasmus Ristolainen.

Still, more than anything, the Sabres are banking on progression. They went 20-14-7 over the final 41 games last season, earning 47 of their 81 points. Players are a year older, a year wiser and clearly getting more comfortable playing under coach Dan Bylsma.

For the first time in four years, the playoffs are being talked about openly. Here are five storylines to follow throughout camp:

It can be argued no player is under more pressure than Lehner. The Sabres could rise or fall with the Swede’s play.

If he stays healthy and performs like a top No. 1 goalie, then perhaps the team can secure its first playoff berth since 2010-11. If not, it might get ugly.

After a high ankle sprain dogged Lehner all season – he missed three months before undergoing season-ending surgery in late March – he committed himself to a rigorous summer of training, staying in Buffalo and shedding about 40 pounds.

Lehner, 25, looks like a different man. He understands he has a special opportunity and wants to seize it.

Although Lehner pulled out of the World Cup of Hockey, he insists the right ankle he hurt in his Sabres debut is fine.

The Sabres don’t have many options past Lehner. Journeyman backup Anders Nilsson has played only 52 games since 2011-12. Prospect Linus Ullmark, while impressive at times as a rookie, needs more seasoning. So does rookie Jason Kasdorf, who played one late-season NHL game, his only pro appearance.

In the midst of an awful eight-goal, 21-point campaign – Moulson endured a stunning 44-game goal drought – Murray ripped his workout habits, challenging him to improve. Moulson told Murray in April his strong words ticked him off.

Now, can any physical improvements translate into goals? Would Murray cut ties if he doesn’t improve? The three-time 30-goal scorer only has 32 goals in 202 games with the Sabres.

Given the sorry teams Buffalo fielded in Moulson’s first two seasons, he received some mulligans. That ended early in 2015-16, when he lost the opportunity to play beside top centers Jack Eichel and Ryan O’Reilly and was mostly relegated to fourth-line duty.

If you’re looking for a silver lining in Moulson’s wretched season, he actually started and finished well, scoring four goals in his first 12 games and three times in the last six.

Zemgus Girgensons’ spot in the lineup

A year after scoring 15 goals in 61 games as a No. 1 center, Girgensons struggled, mustering only seven goals in 71 appearances.

The Latvian, 22, never fit anywhere in the team’s revamped lineup, skating all over as a center and a winger.

Right now, based on the depth chart, Girgensons looks like a fourth-liner. While he isn’t really a first-line center, he shouldn’t on the weakest trio, either.

So what will happen? Remember, Girgensons is one of only six players left acquired by the team’s old regime.

He thrived under former coach Ted Nolan, who gave his players more freedom than Bylsma. Girgensons adapted poorly to his new coach’s structure.

While Girgensons endured a miserable season, he showcased some notable chemistry beside Eichel. Perhaps Bylsma will want to examine that tandem again.

Ristolainen, one of four Sabres competing in the World Cup, is still a restricted free agent.

There are a few prominent unsigned RFAs out there, including Calgary Flames star Johnny Gaudreau. It’s hard to imagine Ristolainen, 21, won’t have a new contract before the Oct. 13 opener.

In July, Murray sounded optimistic a deal would get done, saying “both sides probably know where we’re traveling to.”

That’s almost certainly a long-term contract worth more than $5 million a season for the No. 1 defenseman.

Ennis, 26, endured a miserable year, mustering only three goals and 11 points in 23 games before his second concussion in two months prematurely ended his season.

He began practicing regularly again in April, which gave him some peace of mind heading into the summer.

Prior to getting thumped by Washington’s Alex Ovechkin on Dec. 30, Ennis looked uncomfortable in Bylsma’s system. Like Girgensons, the shifty winger thrived with fewer restrictions under Nolan, scoring 20 goals two straight seasons.

The Sabres need scoring badly up front. Ennis, if he’s healthy and can adapt to Bylsma, could provide it.