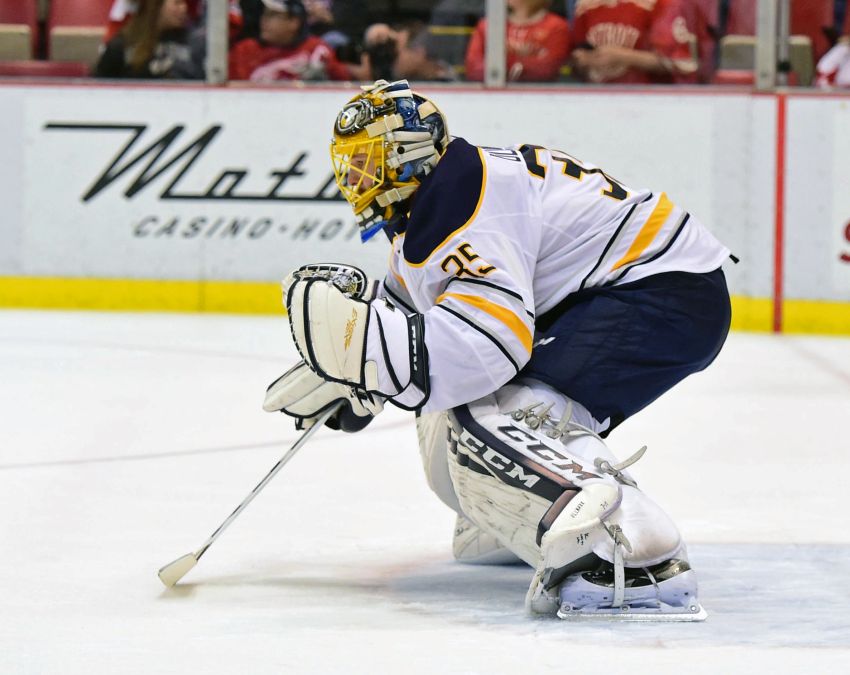 By early November, some fans wanted Ullmark to be the Sabres’ new starter. By January, the rookie was back in the minors. By March, he couldn’t even win an AHL game, losing eight straight decisions.

“My first half of the season was good,” Ullmark said Sunday following a session of rookie camp. “Then the (second) half of last season was, I would say, bad, actually. I’m not happy with that.”

Actually, it was really bad. Ullmark, 23, closed his first North American season with a ghastly .868 save percentage in his final nine appearances with the Rochester Americans and compiled a terrible 4.29 goals-against average in four April starts.

So what happened to the loquacious Swede? Remember, he posted a 2.60 goals-against average and a .913 save percentage in 20 NHL appearances.

“I think (I struggled) mostly because I was in bad shape and I couldn’t really keep my energy up all the time,” Ullmark said inside HarborCenter. “So I feel way better now coming into camp.”

Ullmark’s conditioning was poor because he spent so much time rehabbing from the surgeries. He couldn’t train normally during the 2015 offseason. He wasn’t ready for rookie camp or training camp last season, either.

He started practicing in early October and was thrown headfirst into the fray shortly after, playing five times before the month ended. He finally started wearing out as he neared the 40-game mark.

“After you’ve done six months of rehab, it’s hard to come into camp with one month of really good practices,” he said. “You want to have, like I have now, five months of hard practice and off-ice sessions.”

“I just feel really good this year,” he said.

Still, that didn’t translate into a strong performance in Saturday’s sloppy 6-3 Prospects Challenge loss to the New Jersey Devils, a contest in which Ullmark stopped 24 of 29 shots.

“A tough one, first one of the season,” Ullmark said.

Ullmark and Kasdorf, who made his NHL debut April 8, will likely begin the season as the Amerks’ goalies. The Sabres want Robin Lehner to be their workhorse No. 1 goalie. They also traded a fifth-round draft pick for journeyman backup Anders Nilsson.

Given Ullmark already has a year of pro experience and played 28 AHL games, he could be Amerks coach Dan Lambert’s starter.

“Ullmark basically was No. 1 there last season,” Lambert said. “If he’s down there, I like to think it’s going to be his job to lose. I don’t want to say that because you never know. Kasdorf is also a prospect, and if he stands on his head, it might be hard to keep him out of the net.”

Ullmark and Kasdorf, 24, have a mutual respect for each other. Both youngsters always seem to be smiling and share a positive outlook.

“We get along really well,” Kasdorf said. “I really enjoy him as a goalie partner. There’s a lot of things I can learn from him. It’s been good so far.”

Lambert hopes that leads to a healthy competition between the prospects.

“I’m hoping they push each other … not only with (their) work ethic, but also for the net,” Lambert said. “I would love to see those guys really battle and push each other to see who’s better and who wants the net more often.”

Kasdorf, an afterthought in the February 2015 blockbuster Evander Kane trade with Winnipeg, left college in March and finished the season in Buffalo.

Just weeks after his NHL debut, his wife, Stacy, gave birth to a baby girl, Everly. Kasdorf graduated from R.P.I. later in May.

“You can really (see) that he’s happy and he’s riding above the clouds,” Ullmark said. “I like that he competes out there and he competes against me and I compete against him. There’s no bad feelings or hard feelings against each other. We’re just battling our (behinds) off.”

Kasdorf’s small taste of the NHL – he practiced before making 26 saves in a 4-1 home loss to Columbus – helped him prepare for the summer.

“I think the biggest thing is making sure I’m skating with really high-end players, getting used to the speed of the shots again,” Kasdorf said.

“We just thought we should try something different,” Lambert said.

“Talking to Alex, he knows he can play better,” Lambert said.