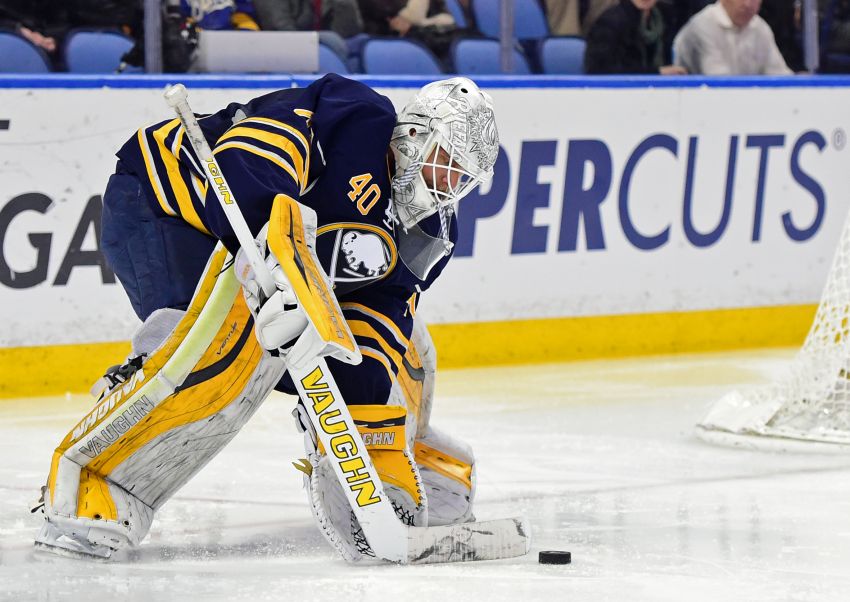 BUFFALO – Sabres goalie Robin Lehner knew his pain threshold would be tested when he returned in mid-January from the high right ankle sprain he suffered opening night.

“Since that day it’s been pain, it’s been swelling after every practice, every game,” Lehner said Sunday as the Sabres held their end-of-season meetings inside the First Niagara Center.

After missing more than three months, Lehner started 20 times, often performing like the No. 1 goalie the Sabres sorely wanted. Still, his tender ankle eventually “started impacting my game,” he said.

When Lehner couldn’t move properly from right to left in the 10 days before his season ended March 16, he knew he had to stop playing.

The Sabres announced March 30 Lehner had undergone season-ending surgery. He said the procedure went well and the surgeon put in some “tightropes,” an alternative to screws.

The Swede, 24, is wearing a cast again and wheeling around on the same scooter he used in the fall. He can start working out when he gets the cast off in two weeks.

“My training camp starts in two weeks,” said Lehner, who’s relieved the worst of the injury is over.

No thought was given to surgery in October because Lehner had a “clear-cut ankle sprain.”

Lehner plans to stay in Buffalo all summer and rehab with the team’s training staff.

“It’s not going to be a fun period for me, but it’s for a good purpose,” he said.

That purpose is being a true No. 1 goalie the Sabres can rely on for at least 55 or 60 starts. By the start of next season, Lehner will have only played 21 NHL games in a 20-month span.

“I know I can play a lot of games,” Lehner said.

Before the ankle injury, Lehner suffered a scary, season-ending concussion Feb. 16, 2015 with the Ottawa Senators, who dealt him to the Sabres for a first-round pick June 26.

“Hopefully,” Lehner said about next season, “I’m going to be healthy.”

Then he quickly caught himself.

Lehner, who’s listed at 6-foot-5 and 240 pounds, couldn’t work out regularly until late last summer because of his concussion. He wants to lose a little weight but mostly wants to get stronger.

“Going into next season and being fully healthy and fully in great shape, I know what I can do with that,” Lehner said. “I’m very excited.”

Lehner played well in his two-month run as starter, going 5-9-5 with a 2.47 goals-against average, a .924 save percentage and one shutout. Counting overtime and shootouts, Lehner suffered nine one-goal losses.

“I went in and showed what I could do, with complications, with a high ankle sprain,” Lehner said. “I’m very confident in myself. I know I’m a good goalie. I know the best thing I can take out of this is I’m going to come out next season with no issues.”

Sabres rookie Jack Eichel, who has only had a few shorts breaks in the last year or so, won’t represent Team USA at the upcoming world championship in Russia.

“I think it’s time for me to take a little break and unwind a little bit here and try to take a deep breath for the first time in a while,” Eichel said.

The center will play for the North America Under-23 team at the World Cup of Hockey in September.

His first season was a whirlwind.

“I don’t think it’s really set in yet, the fact that you’re completely done with your rookie year,” Eichel said. “It’s a little weird right now.”

The Sabres sent rookie wingers Evan Rodrigues and Cole Schneider and goalie Linus Ullmark back to the Rochester Americans on Sunday. All three played in the Sabres’ 4-3 season-ending overtime win Saturday against the New York Islanders.