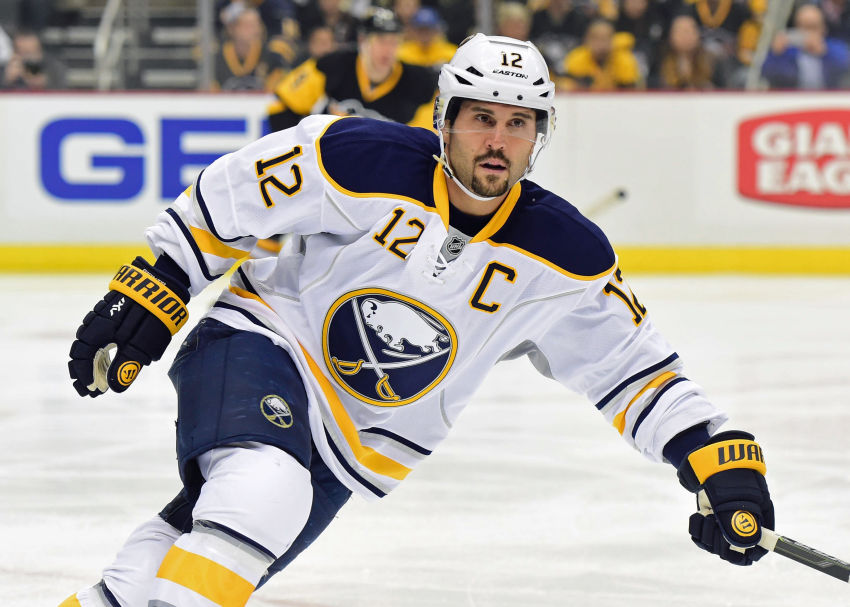 BUFFALO – Just over six minutes into the third period Sunday, Sabres captain Brian Gionta deftly backhanded the puck along the left boards through the neutral zone into Islanders territory. Center Zemgus Girgensons then barreled in, retrieving the pass in the circle before slickly feeding Matt Moulson for the tying goal.

For Girgensons, the nifty assist in the Sabres’ 2-1 victory against New York was his first this season and just his second point. For Gionta, the point marked the second straight game he created a pivotal goal.

The Sabres’ offense has come to life recently, scoring 15 goals in the last five games entering tonight’s tilt against the Tampa Bay Lightning inside the First Niagara Center. Not surprisingly, some contributions from Gionta and Girgensons have helped ignite it.

Let’s deal with Gionta first. At 36, he’s the Sabres’ oldest player and most decorated goal scorer with 262. The winger endured his worst start ever a year ago, scoring his first goal 20 games into the season. He finished strongly, however, compiling six goals and 16 points in his final 14 appearances.

Gionta was arguably the Sabres’ best forward during the preseason, earning duty beside rookie center Jack Eichel before a lower-body injury shelved him for the first three games.

“His last two games he’s really in a much better spot … playing how he needs to play,” Sabres coach Dan Bylsma said Wednesday. “(He) hasn’t gotten the result on the scoresheet yet … but I think he’s coming back from an injury, getting back and getting up to full speed.

“I don’t think he was totally there the first couple games. I think his last couple games … have been much better games from him, and if he keeps playing like that, he’s going to get on the scoresheet for us.”

Gionta usually gets on the scoresheet about 25 times a season, his full-season average since 2005-06. Clearly, the injury has slowed him.

“(I) felt good … through the preseason games, and then you get an injury, it sets you back a couple weeks and you lose your timing and you got to find your game again,” said Gionta, who has a point in three of the last four games. “It just took me a little longer to find it than I wanted to.”

He added: “It took me a few games to find it, but I feel like the last four games I’ve been better and been on it.”

“There’s a lot of new things to take in, a lot of new stuff that you have to know,” Girgensons said. “At that time maybe … we were thinking on the ice, not playing. So now it’s all laying down all of the systems and everything. You just play, you don’t think too much.”

Bylsma believes Girgensons, 21, has recently “stepped up” and started “driving our team.”

“Last game, in a time in the game where we needed it, he’s the guy who steps up and (with) authority, he’s carrying the puck up the ice, stepping out of the D-zone coverage,” Bylsma said about the tying goal. “The way he’s skating, the goal’s a great example. … The last handful of games that’s what he’s been doing for our team.”

Having won three of the last four outings, the last handful have been the Sabres’ best in almost a year. They’re gunning for their first three-game winning streak since December.

Besides being a coach, Bylsma counts himself as a hockey fan.

Oilers phenom Connor McDavid’s first meeting with Pittsburgh Penguins superstar Sidney Crosby on Friday in Edmonton, one of the most anticipated matchups on the NHL schedule this season, was circled on Bylsma’s calendar.

Now, with McDavid sidelined “months” with a broken left clavicle he suffered late Tuesday in the Oilers’ 4-2 win against the Flyers, Bylsma, like most hockey fans, is wildly disappointed.

“I don’t know if there could be any more disappointment that he’s not going to continue playing,” Bylsma said.

Eichel, the mega-prospect selected second overall in June after McDavid, said he had no reaction to McDavid’s injury. Clearly, Eichel wants to distance himself from McDavid comparisons.