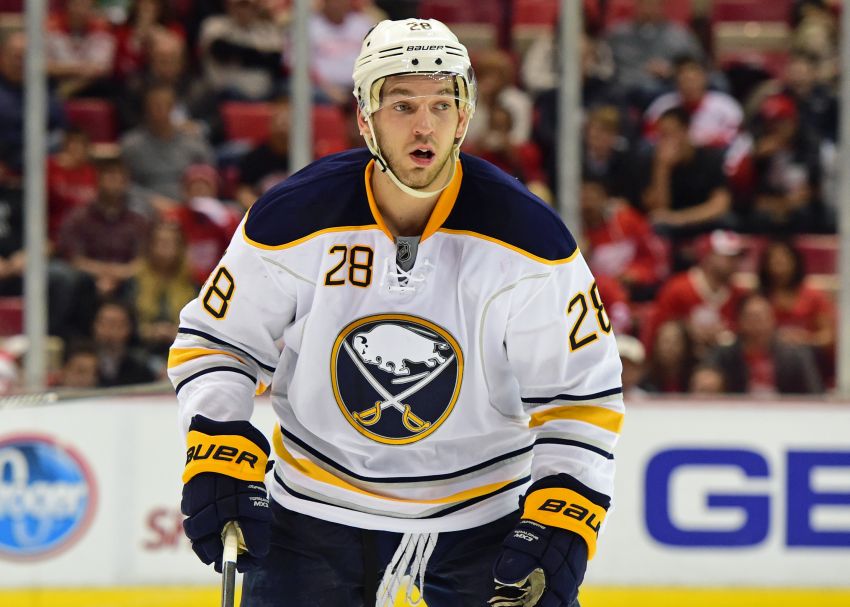 BUFFALO – Barely a minute into the third period last Tuesday, Sabres winger Zemgus Girgensons roared down the left side into the Ottawa zone before stopping and lifting a saucer pass to center Jack Eichel, who was zooming to the net down the middle.

The rookie connected, got stymied by Senators goalie Craig Anderson but managed to tuck the loose puck in for the winner in the Sabres’ 3-2 comeback victory.

The slick score, the duo’s fourth goal and sixth point in two nights, illustrates the growing chemistry between the youngsters, who have quickly become the Sabres’ most dangerous tandem.

“Kind of a two-pronged effect with guys with speed coming at you,” coach Dan Bylsma said Tuesday after the Sabres prepared for tonight’s road contest against the reeling Montreal Canadiens.

That speed, especially Eichel’s, can be lethal. Combine that with Girgensons’ physicality and ability to create space, and Bylsma might have finally found a regular sidekick for Eichel after months of searching. Bylsma plans to have winger Marcus Foligno join them tonight in the Sabres’ first game following the NHL All-Star break.

Right away, they clicked. In their first game together Dec. 30 in Washington, Girgensons set up Eichel’s goal before later ending his 11-game goal drought by completing some of the pivot’s nifty work.

“I can provide some space for him to do that stuff, where I think that’s a major thing,” Girgensons said. “We complement each other.”

Playing beside Eichel has ignited Girgensons, who struggled offensively for months. The Latvian scored as many goals in 1:13 in the third period last Monday as he had in the previous 31 games.

Girgensons had 15 goals and 30 points in 61 games in 2014-15, yet mustered only two scores in his first 32 appearances this season. Still, the 22-year-old believed he was playing a strong game.

“I think that’s the only thing that’s been lacking, point production,” said Girgensons, who has five goals and 10 points in 42 games. “Of course, it’s a big part of the game.”

To Bylsma, Girgensons’ performance in the last 12 games or so, not his point production, is “more of an indicator of where Zemgus’ game is at.”

The 6-foot-3, 226-pound Foligno’s presence on the line is intriguing. The enigmatic 24-year-old has been all over the lineup this season, skating on a slew of trios. He played 17 minutes, 33 seconds last game, his highest total since Oct. 12.

“He can get up the ice as well,” Bylsma said. “If you’re looking too much at Jack or Zemgus, hopefully you can see Marcus, with his speed, getting to the net and being a factor.”

“I’m actually pretty eager to see him on that wing, to see if he can be a guy that can not only provide that speed and physicality, but be the guy who can be the benefactor of a guy at the net and finish off some plays from Jack and Zemgus,” he said.

Foligno, who has three goals and 10 points in 44 games, knows playing beside Eichel and Girgensons could help his offense “big time.”

“It’s something in the back of my mind I need to get going,” he said.