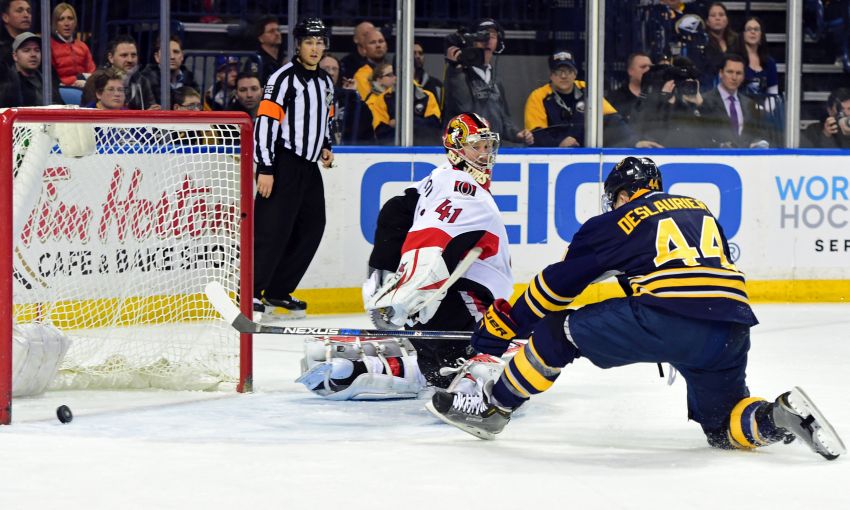 TORONTO – As a third- or fourth-liner known more for his fists than his soft hands, gritty Buffalo Sabres winger Nick Deslauriers has endured some long goal droughts.

While the likable Deslauriers scored his career-high sixth goal in Friday’s 3-1 home win against the Ottawa Senators, he has only 12 in his 160-game career. After scoring three times in the first 11 games this season, the former defenseman went 41 appearances before finally scoring again March 3.

“I told him he needs to score more because he’s the best celebrator on the team,” Sabres coach Dan Bylsma joked.

Yes, the affable Deslauriers, 25, usually celebrates each goal wildly. After converting Ryan O’Reilly’s nifty pass for the eventual winner Friday, he got on his knees, smiled widely and yelled as his teammates congratulated him.

“For me, you got to celebrate like it’s your last one,” Deslauriers said Saturday prior to the Sabres’ 4-1 loss to the Maple Leafs. “You never know. I kind of lose control when I score.”

Deslauriers has lost control three times in his last nine outings, the best scoring stretch of his short career.

Bylsma rewarded Deslauriers last week, promoting him to the right wing beside O’Reilly, the No. 1 center, and Evander Kane. Deslauriers moved back to the fourth line Saturday.

Why can Deslauriers, who played with O’Reilly briefly in the fall, occasionally move up and even thrive on a scoring line?

That was evident Friday. In addition to the goal, Bylsma said Deslauriers had three first-period hits and created four forechecking opportunities “due to his puck management and … his physicality.”

“He’s not going up there to be the (Hall of Famer) Jari Kurri next to (Wayne) Gretzky but more the Dave Semenko role (tough guy) on that line,” Bylsma said about one of hockey’s famous lines.

Deslauriers believes he’s “the kind of guy that’s just can move up and down the lineup.”

To replace the center, the Sabres recalled rookie winger Dan Catenacci from the Rochester Americans hours before the game. Cal O’Reilly moved to Eichel’s spot between Zemgus Girgensons and Sam Reinhart.

Update: Catenacci has been sent back down.

Eichel was feeling OK, Bylsma said, but he “took a turn for the flu worse” Saturday afternoon.

Bylsma said the Sabres have no plans for goalie Robin Lehner, who aggravated his high ankle sprain twice recently, to undergo surgery.

Thirty-five years ago Saturday – March 19, 1981 – the Sabres tied a franchise record for goals in their 14-4 annihilation of the Leafs at Memorial Auditorium. The nine second-period goals are still a franchise record.

Eichel needs one more point to become the ninth Sabres rookie to reach 50 points and the first since Derek Plante had 56 in 1993-94. He would be the second-youngest to reach the milestone, trailing only defenseman Phil Housley, who had 66 points in 1982-83.

Notes: Center Frederik Gauthier, a 2013 first-rounder, became the 11th Leafs player to make his NHL debut this season. … Deslauriers on the fiery Lehner, who wanted to fight Montreal goalie Ben Scrivens on Wednesday: “I would not mess with him. I don’t call him ‘The Big Bear’ for nothing.” … Saturday was the 200th all-time meeting between the longtime rivals. Buffalo is 110-64-26.