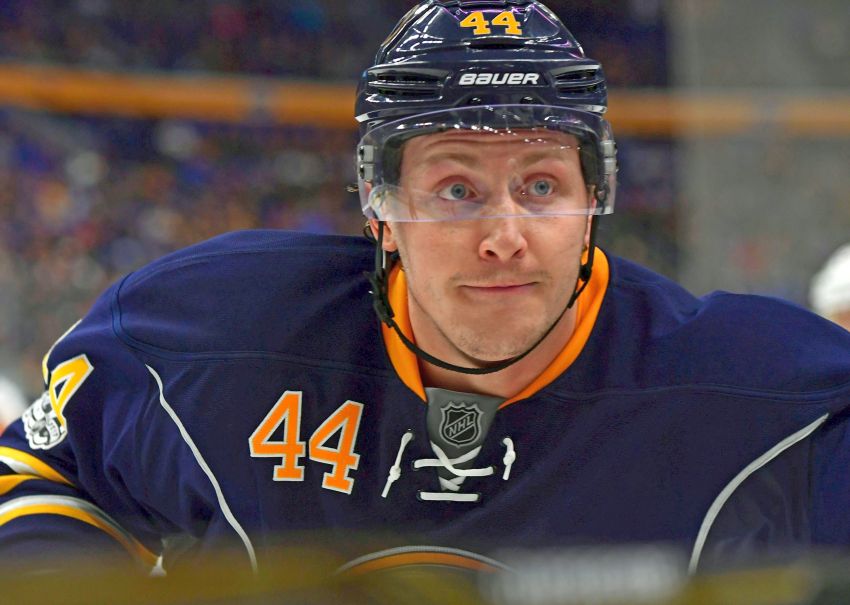 BUFFALO – When Sabres coach Dan Bylsma charged Nick Deslauriers with creating some energy, the gritty winger’s first instinct, of course, was to fight.

But these days, those opportunities are scarce. Deslauriers has only fought four times this season. He certainly wasn’t going to find one enjoying a rare shift on the first line with the listless Sabres down three goals Saturday.

“I would’ve loved to get a fight there, but I don’t think there’s a player out there that would’ve been good for that,” Deslauriers said following the Sabres’ 5-3 come-from-behind win against the Columbus Blue Jackets inside KeyBank Center.

“Put it deep, get a good forecheck,” Deslauriers said.

On the first shift of the second period, the Sabres got the puck deep, and sure enough, Deslauriers grabbed control behind the net. He then fed defenseman Jake McCabe, who one-timed the backhand pass from the left circle.

“We knew what we were going to do,” Deslauriers said. “That’s what probably brought the success there. Caber just screamed really loud for that puck, and I just gave it to him right on the tee.”

“I didn’t necessarily think it was going to come in the form of a backhand pass from behind the net … for a goal,” Bylsma said. “To his credit, he gave it. I think it energized our team – not just the play, not just the goal – but (all of) the play from him.”

Deslauriers hasn’t played or created much this season, the most frustrating of his four-year career. If he dresses for tonight’s tilt against the San Jose Sharks, the start of a four-game road trip, it will only be his 37th appearance. He recently sat four straight contests and 12 of 22 as a healthy scratch.

Deslauriers enjoyed regular duty throughout his career before a knee injury he suffered Oct. 29 sidelined him 19 games.

When he returned, he usually skated sparingly. He recently skated as a center, a position he had never played.

But Kyle Okposo’s rib injury has created a regular spot for him, and Deslauriers has seized some of his limited opportunities and earned more ice time, skating at least six minutes in four of the last five games.

“I feel great,” he said. “It’s obviously not fun to be in the stands. But it feels good. I know my job. It’s a tough spot where I am.”

Deslauriers, 26, became the last Sabres regular to record a point when he assisted on Evan Rodrigues’ first-period goal in Friday’s 4-3 loss in Columbus.

Deslauriers hasn’t scored a goal since March 18, 2016, a 46-game drought. If he keeps playing with O’Reilly, it might finally come. O’Reilly assisted on three of Deslauriers’ six goals last season.

“If you look at the average of points I have with O’Reilly, I think it’s really good,” Deslauriers said. “It’s any options I get to create space for those good players that can handle the puck, I’m just there to do that.”

The Sabres, who haven’t had an extra forward since Okposo was hurt, recalled winger Hudson Fasching from the Rochester Americans on Monday before they flew to San Jose.

Fasching, 21, began this season with the Sabres. He hasn’t played an NHL contest since suffering a groin injury Oct. 30. The Sabres sent him to the AHL in early November, and he missed two months because of the injury.

The rookie has six goals and eight points in 25 games with the Amerks. He had zero points in six NHL appearances earlier this season.

The Sabres are expected to sign Russian defenseman Viktor Antipin, according to Sportsnet’s Elliotte Friedman.

The 5-foot-11, 179-pound Antipin, 24, compiled six goals and 24 points in 59 games with Metallurg Magnitogorsk this season, his fifth with the KHL club.

Antipin, a left-handed shot, wouldn’t be eligible to play until next season. He has never played in North America.

The Sabres are also interested in free agent defenseman Gavin Bayreuther, who just finished his senior season at St. Lawrence University, according to TSN’s Bob McKenzie.