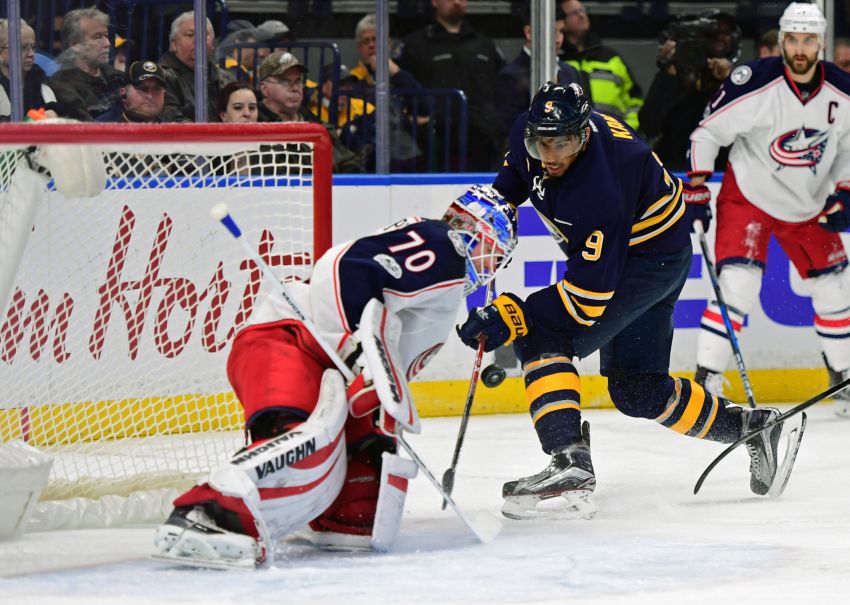 BUFFALO – As if the season-killing streak the Sabres have recently endured wasn’t bad enough, it looked like they might hit rock bottom again Saturday.

Sabres goalie Anders Nilsson, so good at home this season, performed terribly for 20 minutes. Defenseman Jake McCabe, one of the steadiest Sabres all season, struggled through perhaps the worst period of his career.

When the period finally ended, many of the 18,744 fans inside KeyBank Center loudly booed the Sabres off the ice.

“We might’ve struggled, we might have our ups and downs, but we’ve never quit,” goalie Robin Lehner said after the Sabres stunned Columbus, roaring back to win 5-3.

How did it happen? The Sabres tied it before the second period ended. Then Evander Kane’s power-play goal 17:31 into the third period put the Sabres up 4-3.

But the comeback started during the first intermission, when Sabres coach Dan Bylsma appealed to his team’s pride “quite a bit,” he said.

“I just didn’t like what we were putting into the game at that point in time,” Bylsma said. “They score the third goal, we needed to have a response from our team and passion and energy and how we play the game.”

Lehner replaced Nilsson, who was mercifully yanked for the first time this season, to start the second period. McCabe, whose mistakes created two Columbus goals, scored 18 seconds in.

Suddenly, the Sabres had some hope.

Matt Moulson’s power-play goal got the Sabres within one at 5:43. Meanwhile, Lehner, who began the night with a 3.79 goals-against average and an .881 save percentage in his previous six outings, stopped all 13 second-period shots.

Sam Reinhart tied it at 19:57, giving the Sabres all the momentum heading to the break.

“We came out, we scored the first shift, we got some momentum going and it was fun to play,” Lehner said.

The same fans roared in approval as the Sabres left the ice.

“We came out and played with some character, played with some emotion, and that’s what got us going,” Kane said after the Sabres ended their four-game losing streak (0-3-1) and won for just the second time in 10 tries (2-6-2).

Before Jack Eichel’s empty-net goal secured the win, Lehner made the save of the game, stoning Cam Atkinson with his right pad with 33.4 seconds left.

Among Lehner’s 24 saves were several huge ones that kept the Sabres in the game during the second period.

“He probably looked the best he’s looked all year in net with the way he played in the second and third period,” Bylsma said.

David Savard, Nick Foligno and Oliver Bjorkstrand helped Columbus, which beat the Sabres 4-3 Friday at home, open up a commanding three-goal lead by the 17:56 mark.

“We didn’t give up,” Lehner said. “We’re not giving up on the season, either.”

The Sabres are one of five teams to have two wins when trailing by three goals this season, according to statistician Mike Haim. The Sabres hadn’t trailed by three goals and won in regulation since beating Pittsburgh 4-3 on Dec. 29, 2009.

Sabres defenseman Cody Franson left the game in the third period after a shot hit him in the face. He was sporting some stitches following the contest.