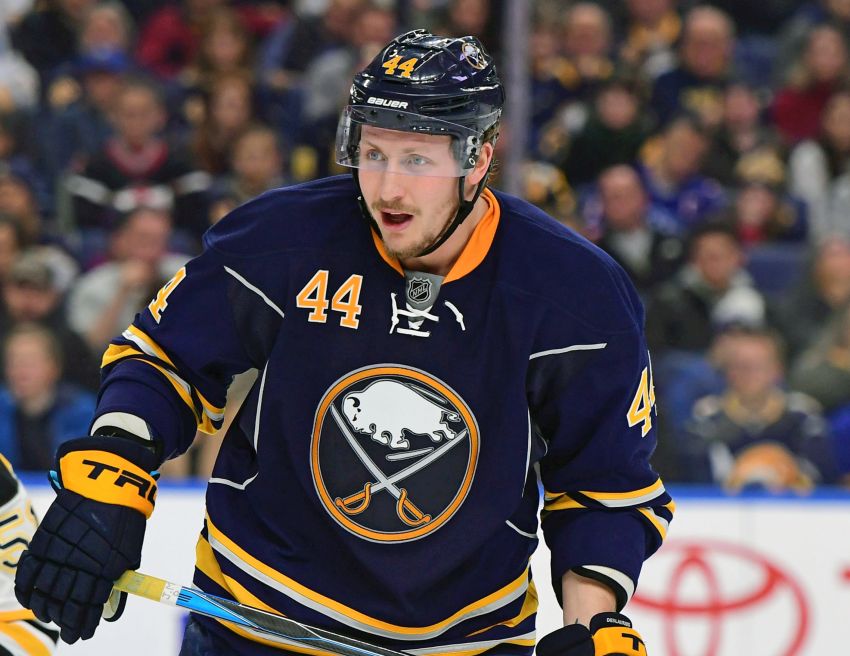 BUFFALO – Chat with Nick Deslauriers for a few minutes, and if the subject turns to fighting, the affable Sabres winger usually perks up.

Deslauriers, 25, relishes his job as the Sabres’ chief protector. In his 196-game NHL career, he has 15 fights and 12 goals.

“That’s what I want to bring, just safety for all the guys that are on the ice with me,” Deslauriers said Friday prior to being scratched for the Sabres’ 3-2 overtime win against the Detroit Red Wings inside KeyBank Center.

But Deslauriers’ role has been diminishing. After sitting out as a healthy scratch once in his first three seasons, Deslauriers has watched four of the last 15 games. He has only fought once this year.

“He’s been in and out of the lineup,” Sabres coach Dan Bylsma said. “You can only put 12 in there and Nick, (he’s) effective at some points in some situations for our team.”

It was clear when Deslauriers returned from a knee injury in December he would probably serve as the team’s 13th forward, shuffling in and out of the lineup.

“It’s not fun,” Deslauriers said. “It doesn’t bother me when we win. I think it’s the best for the team. But obviously when you’re not sure you’ll play every game, it’s something you have to put your mind to and just be strong mentally.

“Coming back from an injury, there’s things that maybe other guys click better. … You just have to make sure that you’re there for the team, the boys – on and off the ice.”

He added: “The style of game that I play is not every style that everybody can bring.”

Fighting has been going down for years, although, according to hockeyfights.com, it’s up slightly this season from .28 a game to .31. The Sabres have fought 13 times.

The 6-foot-1, 216-pound Deslauriers, one of the league’s underrated heavyweights, fought the Flyers’ Brandon Manning on Jan. 10.

“I hope it’s still part of the game,” Deslauriers said about fighting. “But lately I can’t find anybody to spark some things up. I think I was lucky to get one against Philly.”

Sabres winger Matt Moulson said he had no clue he was approaching his 600th NHL game.

“I don’t think I even realized it until my wife told me the other day,” Moulson said Friday prior to hitting the milestone.

The Austrian began Friday with five goals and 10 points in the last seven contests and 12 goals and 31 points in 34 games.

Vanek, 33, has clearly been rejuvenated following a career-worst 18-goal season that led to a contract buyout by the Minnesota Wild.

“I felt like I could still play in this league and play at a high level and be effective,” Vanek said. “I talked to a few teams. Detroit was one of them that kind of saw me as a good fit.”

The Red Wings are Vanek’s fourth club since the Sabres traded him to the New York Islanders as they began gutting the team and rebuilding early in 2013-14.

“Did I want to leave? No,” Vanek said. “But at the time I didn’t know which direction this franchise was going. I had a few questions. None of them got answered. I guess I was a little selfish and wanted to move.

“It hasn’t been easy, but it definitely has opened my eyes in a few different things how different organizations run things. I think it will benefit me when I’m done with my playing career.”

Notes: With goalie Anders Nilsson recovered from the flu, the Sabres returned Linus Ullmark to the Rochester Americans before the game. … Winger Tyler Ennis played Friday after resting his groin Tuesday. Ennis returned from a 30-game absence Monday.