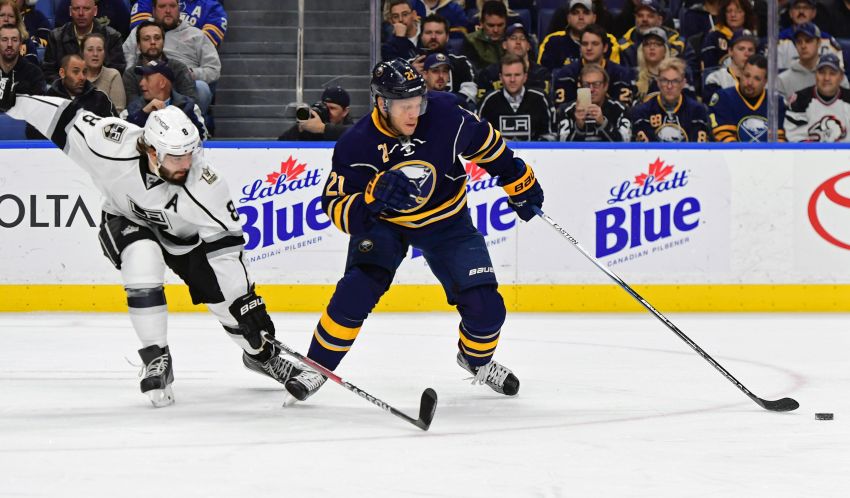 BUFFALO – With leading scorer Kyle Okposo week-to-week after hurting his ribs, instead of recalling a forward, the Sabres will dress Nick Deslauriers for tonight’s tilt against the Tampa Bay Lightning.

Deslauriers, a healthy scratch the last four games, has zero points this season. Okposo has 19 goals and 43 points.

The Sabres have used two of their four late-season recalls, Bylsma said. They didn’t think about summoning someone from the AHL, he said.

“He’s needs to be a physical presence,” Bylsma said of Deslauriers. “He needs to be a factor in the game with his body. With a line right now with Zemgus and Justin Bailey, we need all four lines to play in this game tonight against the Tampa Bay Lightning.

“I think with Zemgus and Bails’ speeds and Nick being physical, it can be an effective line for us.”

Deslauriers will be the only new face in the lineup. Sabres goalie Robin Lehner will start tonight, his 46th nod this season.

After seven straight games against Western Conference opponents, the seventh-place Sabres face an Atlantic Division foe they trail by just one point.

The four-point game is huge.

“We got to climb by the guys that are right in front of us,” Bylsma said.

Tampa Bay, which has been without injured superstar Steven Stamkos for months, had won four of five games before Friday’s 5-2 loss in Pittsburgh.

“They’re a dynamic rush team, a speed team,” Bylsma said. “They have a long element to their game that allows them to get four guys into their rush.”