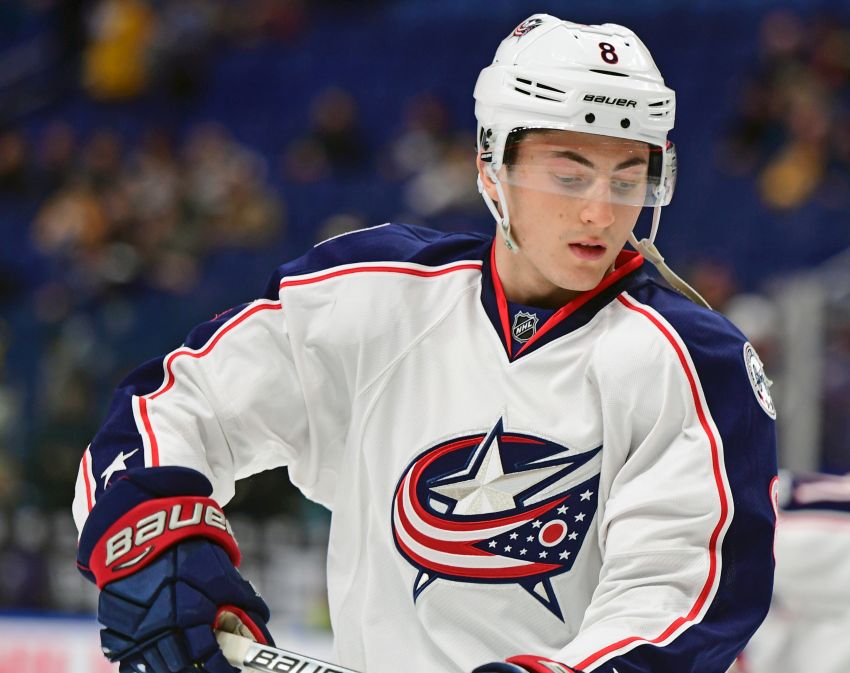 BUFFALO – Before Zach Werenski joined the upstart Columbus Blue Jackets, before the slick teenager began one of the greatest campaigns by a rookie defenseman in NHL history, he spent the second half of his last season at the University of Michigan playing beside Youngstown’s Joe Cecconi.

“I loved it,” Werenski said Saturday prior to the Blue Jackets’ 5-3 loss to the Sabres inside KeyBank Center.

Werenski, 19, has quickly morphed into a star, compiling 10 goals and 43 points. The American is only the 10th teenage rookie defenseman to record 40 or more points in a season.

But barely a year ago, Werenski was a college sophomore just weeks away from turning pro. Werenski said Cecconi, then a freshman, provided the “perfect balance” beside him.

Werenski, of course, was the offensive threat. Cecconi, meanwhile, was the anchor, staying back when Werenski moved into the play.

“He’s someone who’s a stay-at-home guy, has an offensive touch,” Werenski said. “But for me, it was great, because I like playing offense and he would get me the puck a lot. I always knew he was back there if I ever needed him.

“He’s someone that an offensive guy like myself really loves to play with. He makes things easy on us. So I loved playing with him last year.”

The friends also laughed a lot.

“One of the funnier guys I ever met,” Werenski said. “Great teammate, funny guy. He’s just a really nice guy.”

Werenski, the eighth overall pick in 2015, joined a near-perfect situation in Columbus. The Blue Jackets, who are coached by fiery former Sabres assistant John Tortorella, are filled with prime young talent. They rattled off 16 straight wins earlier this season and already have 94 points.

It also helps that Werenski’s new partner, Seth Jones, is one of the NHL’s best defensemen.

“It’s nice to just kind of feel comfortable with him,” Werenski said. “I think it makes it really easy on me. The coaching staff has been awesome. Torts has been great with us young guys. I think one of the hardest things about the NHL is kind of finding the right situation. For me, I think I found it really early.”

Tortorella said Werenski has “one hell of a future ahead of him here.”

“I just think he’s so level-headed,” he said. “Sometimes players end up taking the wrong avenue when they have some success. I think he’s got such a great head on his shoulders he’s just going to stay about his business. There’s nothing but good things coming his way.”