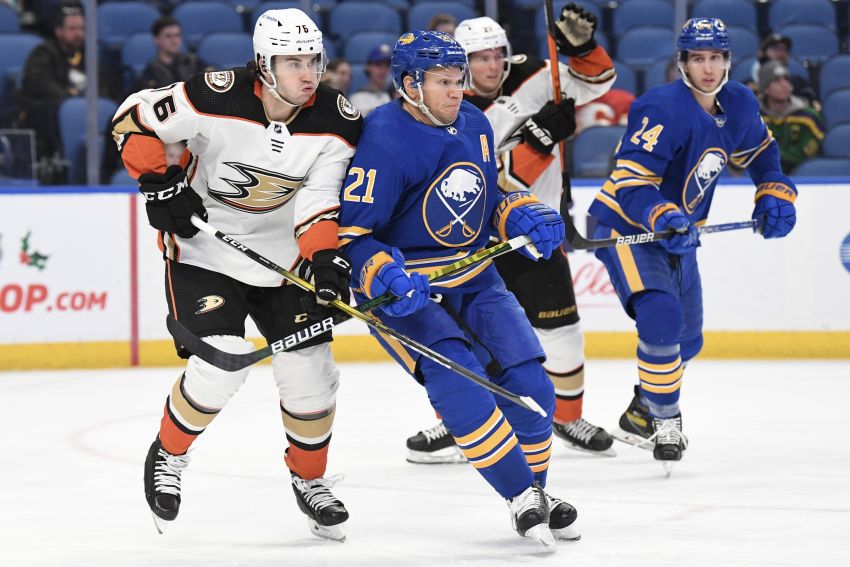 BUFFALO – Center Dylan Cozens, one half of perhaps the Sabres’ best duo, is the rebuilding team’s youngest player. At 20, less than one year into his NHL career, he has been showcasing growth on a weekly basis.

The other half, right winger Kyle Okposo, is the Sabres’ oldest skater. At 33, when many players are graying or out of the NHL, the 15-year veteran has been enjoying a rare late-career resurgence.

Entering tonight’s game against the New York Rangers at KeyBank Center, Okposo has compiled a team-high 17 points in 24 games. His 20-goal, 56-point pace over a full season would be his best offensive output since 2015-16, his last campaign with the New York Islanders.

Prior to the season, the Sabres looked woefully thin at center, with little established talent at the critical position. But Cozens and Tage Thompson, 24, have quickly emerged and entrenched themselves down the middle.

“Dylan is starting to see the game in different ways that he never saw before,” Sabres coach Don Granato said following Thursday’s practice. “He’s manipulating situations in different ways than he ever thought he could or thought of. It looks like he’s enjoying it and having fun with it. It’s fun to watch.

“Right now, you just see he goes into situations and he’s like, ‘I’m going to get out of this situation, I welcome it.’ There’s no stress to it anymore. I think a couple weeks ago the situation stressed him out. You saw anxiety. There’s none right now.”

He added: “He’s been on a seven- or eight-game surge here to a new career-high level for him.”

Cozens seems to be displaying his burgeoning confidence more each game, holding the puck and using his speed and 6-foot-3, 189-pound frame to create space and scoring opportunities.

He has also been shooting the puck more frequently. He has registered at least one shot on goal in nine straight games, a season-long stretch.

“I just started to get on a little roll there and get some confidence going in my shot again,” said Cozens, the seventh overall pick in 2019. “Just shooting the puck more and I know it’ll find a way in.”

Okposo has also been playing a special role in Cozens’ development. Cozens likes to tap into the wealth of knowledge the American has accumulated over his 860-game career.

“Any ups and downs Dylan can go through, Okie’s been through in his career,” Granato said. “He’s very stabilizing and he has offensive IQ, as Dylan does, and they have been really good together.”

Cozens said: “(Okposo has) been great to me ever since I got here last year and helping me transition and learn and being able to ask questions whenever.”

“Sometimes you forget a little bit about your mindset when you were younger and that, not naivety, but you haven’t been in the pro game,” he said. “I’ve seen a lot of different things, and it’s just pure hockey for those guys, the younger guys. And so that different perspective helps me a lot, too. And I love when those guys ask questions.”

Clearly, Cozens and Okposo can benefit from playing together at different stages of their careers. Cozens’ skills have helped Okposo elevate his own game.

“He skates so well and he has the ability when he gets the puck to just blow by guys,” Okposo said. “And I’m like, ‘All right, I got to go catch up now.’ And he’ll pull up and I’ll be in the right layer because I’m behind him, which is great.

“I think when he gets that fire in him he really takes it to the next level through his skating, and that helps him create a lot of different opportunities and that allows me to read the play a little bit more and hit holes at different times. (We’re) starting to get some chemistry that way.”

Playing beside Cozens is one reason Okposo, who mustered just two goals and 13 points in 35 games last year, has recaptured his scoring prowess this season.

“If you’re going to play the style that Donny wants you to play, you got to play offense and you got to be able to make some plays,” Okposo said of Granato’s aggressive, fast-paced system. “It’s just freed up my mind a little bit to try to do some different things. I’m trying to play with pace, and I think that always helps me offensively, just if I’m moving my feet and I’m playing quickly, it allows me to not think out there and plays come a little bit more naturally.”

Rasmus Asplund skated Thursday at left wing beside Cozens and Okposo. Brett Murray, who spent the last two weeks in that spot, practiced beside center Mark Jankowski and Vinnie Hinostroza.

Based on Thursday’s line combinations, Jankowski and John Hayden could move into the lineup tonight, making Anders Bjork a scratch.