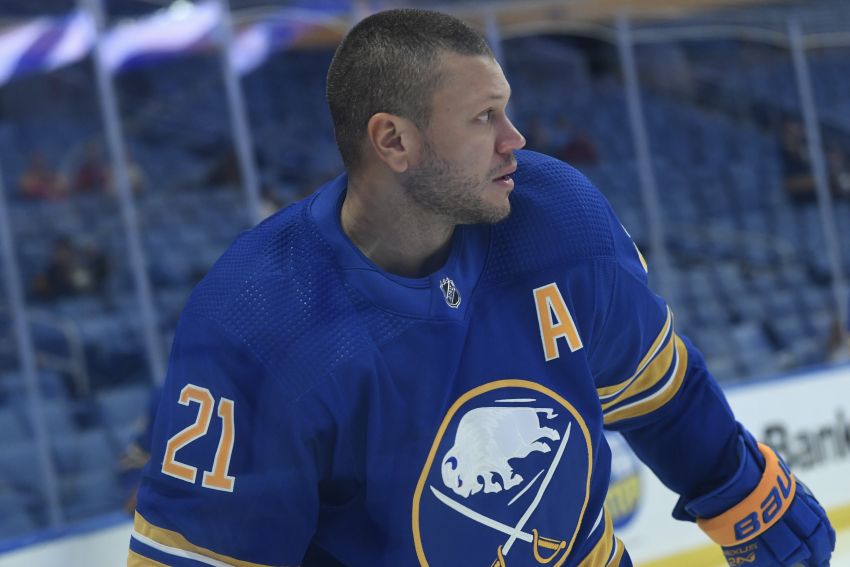 Kyle Okposo believes Buffalo will get back on track. ©2021, Micheline Veluvolu

BUFFALO – Kyle Okposo called Thursday’s ugly 5-0 loss the Calgary Flames an “outlier.” Over the first two months this season, the veteran winger believes the Sabres have consistently reached a standard that will help them generate success.

Still, every now and then there’s going to be a clunker.

“You have maybe one practice day where we stunk and then we have one game where we really stunk,” Okposo said following Friday’s practice inside KeyBank Center. “Like, that’s not a norm. I’m not worried at all. We’re going to revert back to what we usually do. I have the utmost confidence in the guys that we’re going to do that.”

After enduring their worst loss this season, the Sabres are 7-7-2. Even at .500, they’re exceeding expectations. Remember, many observers pegged the rebuilding team to finish dead last.

“One game, we move on, had a good day today, digested it,” Okposo said. “Obviously, there was a very sour mood in the room last night, but you move past it.”

Coach Don Granato believes the Sabres will move past it Saturday, when the team will practice before flying to New York for Sunday’s game against the Rangers.

But on Friday, Granato did not want to change the team’s mood.

“Think about it and soak it in,” he said.

He added: “You look at the tape and it’s one of those games you want to forget but you know you have to remember. You want to get rid of it but there’s lessons in there to be learned.”

Granato said Thursday’s game started ominously, with 11 possession changes in the first 40 seconds before a team entered the offensive zone.

“You don’t see that in an NHL game,” he said. “So … that was really an indicator of we did nothing to wear on the other team, getting the puck behind them. …

“They started doing stuff after the first 40 seconds to start to wear on us, and at some point in the NHL there’s a breaking point. And they had four consecutive goals on four consecutive scoring chances (in the second period).”

Granato briefly switched his lines during the third period before putting them back together. On Friday, he left them intact.

“I went right back and it was even worse,” he said of his changes Thursday. “It just shows you they weren’t on their game.”

Granato, of course, expressed that to his players.

“And then as a group, we feed off that and we’re all able to know that we didn’t have a good game and we didn’t play hard enough which is very uncharacteristic. We know that that’s not going to repeat itself.”

Granato usually handles adversity calmly. But in Tuesday’s 2-1 road win over the Pittsburgh Penguins, he acknowledged he got on his players for something he felt was lazy and not up to the Sabres’ standard.

“He’s very honest,” Okposo said. “He’s not a yeller and a screamer so when he uses that tactic, everybody’s ears perk up and you know that you did something wrong and it’s not just you made a mistake with the puck or you tried to make a play and it didn’t work. Like, that’s not the case. It’s something that’s serious that needs to be addressed.”

2 thoughts on “Kyle Okposo feels Sabres will bounce back: ‘I have the utmost confidence’”