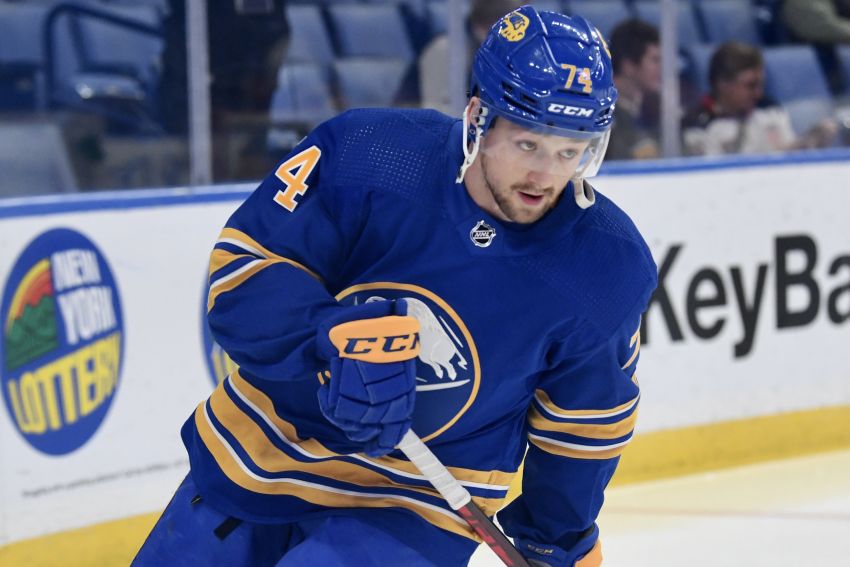 For two months, Asplund had shuttled between the active roster and taxi squad, earning sporadic duty – just five of the first 29 games – during the Sabres’ miserable start. He even returned to the minors for three contests.

Then days after Granato took over, he inserted Asplund, who quickly seized his opportunity, scoring five goals over a 12-game stretch.

By the end of the year, Asplund, 23, had entrenched himself in the lineup.

Through the opening week, Asplund has earned a lot of opportunities. In Tuesday’s 5-2 win, he skated a career-high 18 minutes, 25 seconds and scored his first goal, an empty-netter that sealed the Sabres’ first 3-0 start since 2008.

In addition to taking a regular shift at left wing beside center Tage Thompson and Victor Olofsson against the Vancouver Canucks, he killed penalties and was the net-front man on the top power-play unit.

“He knows that he can play in this league and he knows he can be good offensively and hard to play against,” Sabres winger Kyle Okposo said of Asplund. “(He) really came into his own throughout the year last year and confidence is definitely the biggest thing for him. He’s got it.”

In Granato, Asplund believes he has a coach who’s “a perfect fit” for him.

“Donny just wants you to be the person you are, the player you are and do your thing out there,” he said. “I think that fits perfectly into this group, especially for me as a player.”

“I do not worry about him at all in either zone,” Granato said. “He has a great sense of objective all around the ice and he competes. So he’s got that package. He gives the coach a break in that area.”

Okposo said: “Aspy’s a bit of a Swiss Army Knife, can do everything.”

Asplund said his rookie season with the Rochester Americans in 2018-19 reinforced he must develop into a reliable two-way player if he wanted to crack the NHL.

“The more years I’ve had in pro hockey, the more I’ve learned that, OK, this is what I really have to do to be able to stay on this level and get to the next level,” he said.

“He’s an amazing athlete,” Granato said. “I mean, he’s relentless. He is. There’s so many little details he does and it all starts with being ultra competitive. He internalizes things fast. He adds things to his game, it seems, day by day, game by game.”

What are those little details that help Asplund stand out?

“Just stay in the system, stick on puck and all those small things we work on in practice every day,” he said. “We do them every day, no matter if we have practice after a back-to-back or if it’s, I mean, a bad day, whatever it is. It’s just … doing everything I can to be a lot better hockey player when I leave (the rink).”

Asplund, a second-round pick in 2016, 33rd overall, understands he must produce more offense to become a more well-rounded threat.

He has compiled nine goals and 15 points in 60 career NHL games. He scored seven goals and 11 points in 28 outings last season.

In the first three games, Asplund and his linemates have consistently generated time in the opponent’s zone, buzzing around and pumping shots on goal.

During Saturday’s 2-1 shootout win over the Arizona Coyotes, the trio’s Corsi For was a perfect 100 percent, according to NaturalStatTrick.com. Asplund’s individual Corsi For is a team-high 67.7 percent this season.