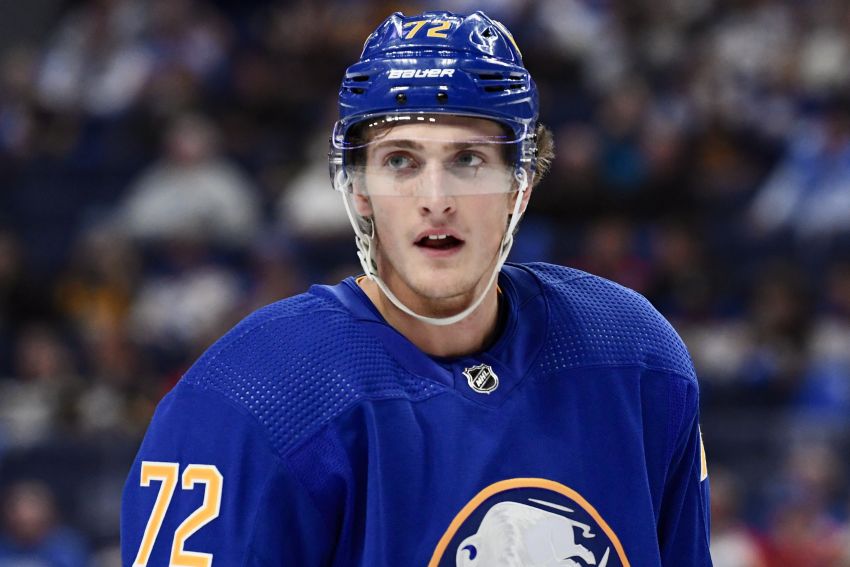 Tage Thompson was switched to center this season. ©2021, Micheline Veluvolu

BUFFALO – Sabres coach Don Granato could see Tage Thompson possessed confidence. It was just that the talented center believed he would eventually reach his potential.

Granato wanted Thompson, 24, to understand the opportunity he had right now.

“I talked to him a lot in the last year about I know you are confident about success, but that confidence is somewhere off in the future, I’m going to be able to become the player that is talked about,” said Granato, whose Sabres host superstar Connor McDavid and the Edmonton Oilers tonight at KeyBank Center.

So Granato challenged Thompson, who was shifted to center during training camp, to stop waiting and start realizing his potential right away.

“Just kind of be a little cocky, a little arrogant,” Thompson said of Granato’s words. “Not, obviously, off the ice, but play with that swagger and that confidence. It’s just something I’ve tried to take into every game.”

Through 12 games this season, Thompson has emerged as one of the Sabres’ top forwards, performing more aggressively and making smarter decisions while better utilizing his 6-foot-7, 218-pound frame.

In addition to recording four goals and seven points, Thompson’s 59 shot attempts ranked ninth in the NHL and fourth among forwards entering Thursday’s games, according to NaturalStatTrick.com. His ice time has swelled to 17 minutes, 54 seconds an outing, more than four minutes higher than last season.

“He’s grown tremendously to the point where his confidence is at a new tier that he expects more,” Granato said. “It’s increased his self-expectation in the moment.”

Thompson has spent this month pivoting the Sabres’ top line between Rasmus Asplund and Jeff Skinner. The trio will almost certainly see action against McDavid tonight and Auston Matthews on Saturday when the Toronto Maple Leafs visit.

Thompson’s transformation, of course, took time. Granato said he first challenged him last season. While Thompson took notable steps over the final weeks, Granato said everything kicked in this year.

“It’s been kind of a rapid growth since that kicked in,” Granato said.

For years, Thompson, whether it be a toe-drag or another slick move he showcased during a game or practice, oozed potential. Still, he never scored consistently or cemented a spot in the lineup.

“You can see success that the player (has) in practice, the things he does in practice, and he gets out (and) because there’s people in the building and other NHL players, that your self-expectation drops a little bit and they don’t execute like they did in practice the day before,” he said. “And he’s starting to connect that and demanding that whatever he does out here in practice he’s intent about doing it in a game. And he’s starting to realize that power of that.”

Thompson has also realized the power his body can generate. He’s no longer the skinny kid the Sabres acquired in the Ryan O’Reilly trade with the St. Louis Blues in 2018.

“He can hold a guy off that used to knock him off the puck, and he’s starting to like it,” Granato said. “And you know he’s got a big frame at (6-foot-7), now he’s starting to realize what that means and how to use it. It’s fun to watch.”

Thompson, who weighed about 205 pounds when he arrived in Buffalo, said he has focused using his size more effectively.

“I feel like now I’m starting to get a little more comfortable in my body and learning how to protect those pucks and use my size and reach,” he said. “I feel like I’ve done a pretty good job with it so far this year.”

For example, Granato said Thompson has exposed the puck less this season.

“A year ago, if you looked at clips, he exposed the puck so the guy didn’t have to go through his body to get it,” he said. “Now … he’s almost baiting them and then using his body, and then his hands come in.”

Granato said Thompson’s ability to lure players to him is one of the reasons he moved him from right wing to center.

“He can use more of his agility because he’s such a great athlete and going potentially either way, where he’s so much more unpredictable if you’re trying to defend him,” he said. “He can roll right, left; he doesn’t have to just go one direction. I think it’s complemented the area of his skill set. … He’s adapted very fast to that. But I do think he’s using his body more.”

“That’s something that Donny and I kind of talked about over the summer, too, is I have the shot, but a lot of times last year it was getting blocked or I wasn’t getting it off quick enough,” he said. “I think just coming in, focusing on getting pucks to the net and trying not to wait for the perfect look, just getting it to the net, it will go in sometimes. So I think just that focus of trying to attack the net more has been something huge for me.”