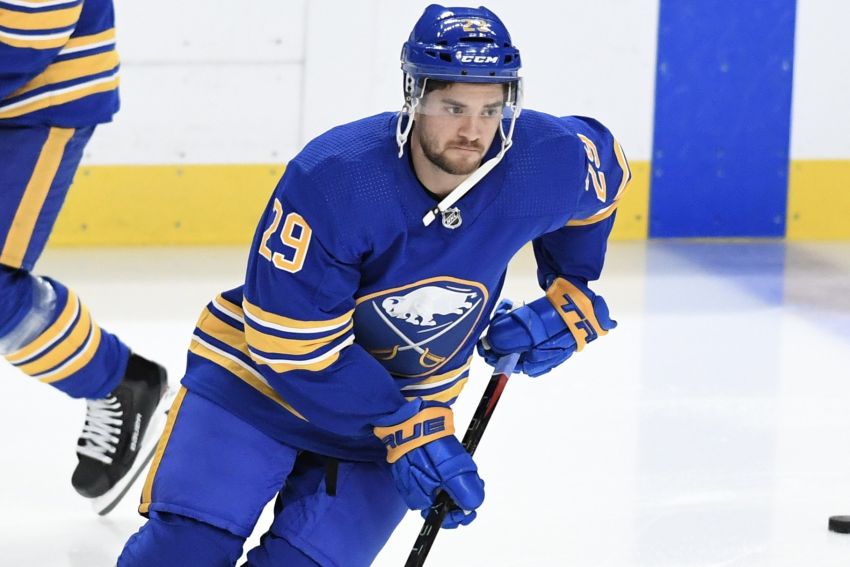 BUFFALO – When Don Granato hung up the phone that day in July, he believed Vinnie Hinostroza wouldn’t be excited about the opportunities the Sabres could offer him.

Granato refuses to oversell players. He was blunt with Hinostroza, a winger he coached with the Chicago Blackhawks, and challenged him. He told him he couldn’t make any promises and earning ice time wouldn’t be easy.

But Granato’s transparency turned out to be a big selling point. Early last season, as Hinostroza struggled to crack the Florida Panthers’ lineup, he couldn’t get any answers from the coaching staff. Hinostroza wanted to play for a coach like Granato.

“He’s always a guy you could go to and tell you how it is, whether it’s good or bad,” Hinostroza said prior to Friday’s preseason game against the Pittsburgh Penguins. “And I think as a player you want to know that if you’re not getting the ice time you want, you want to be able to know what you’re doing wrong or what you need to be doing better to get that ice time. And Donnie’s the type of guy you want to play for.”

So Hinostroza, who finished last season back in Chicago, signed a one-year, $1.05 million contract with the Sabres shortly after free agency opened July 28.

The Sabres likely envision Hinostroza as a second- or third-line winger. In Friday’s contest inside KeyBank Center, he played right wing beside center Zemgus Girgensons and Anders Bjork, his college linemate at Notre Dame, early on. Hinostroza, who skated on the second power-play unit, later moved beside center Casey Mittelstadt and Jeff Skinner.

“He’s got that dynamic pop, the explosiveness,” said Granato, who also called Hinostroza “tenacious” and “relentless,” qualities that make him role model for the team’s young players.

Having scored a career-high 16 goals and 39 points in 72 games with the Arizona Coyotes in 2018-19, Hinostroza showcased some offensive punch earlier in his career.

Still, Hinostroza hasn’t enjoyed much consistency. He has only scored more than seven goals once. He dropped to five goals and 22 points in 68 games in 2019-20.

“He still hasn’t found the level he believes he can find in the NHL,” Granato said. “So he’s a hungry guy.”

In Buffalo, that hunger could create more opportunities. The Sabres have openings all over the lineup. Perhaps Hinostroza can solidify and a regular spot and play on the power play.

The 5-foot-10, 177-pound Hinostroza, of course, believes he has matured and learned what works best for him.

“Throughout my career I’ve seen spurts of it, good year here, good year there, a little bit of an off year,” Hinostroza said. “I think as you develop as a pro, it’s just finding that consistency and that’s something that I think I’ve been able to develop over the last year and a half and through the summer. Being very disciplined off the ice, I think, leads to being better on the ice.”

Hinostroza hardly got on the ice early last season. After signing a one-year, $1 million contract with the Panthers, he quickly became a spare part. He played sparingly for more than two months, averaging just 9 minutes, 50 seconds of ice time over his nine appearances. He recorded zero points and just six shots on goal.

“I don’t know what it was but it wasn’t a great fit,” Hinostroza said. “I didn’t get very many chances. I don’t know if I didn’t earn or just weren’t given but I just kept working hard every day. Went back to Chicago and got the opportunity to play.

“That’s definitely a learning point in my career where you look back on a time like that and you never want to be in that position again.”

Following his return to the Blackhawks, his hometown team, Hinostroza found a groove, scoring four goals and 12 points in 17 games.

Hinostroza’s time in Chicago – he also spent parts of his first three seasons there – helped teach him how to act like pro. When he entered the NHL in 2015-16, the Blackhawks has just won their third Stanley Cup in six seasons.

“You can’t take days off,” he said. “Whether it’s a practice day or a game day, you got to look at it as an opportunity to get better. I’m a little bit older now, so I’ve seen it a bit where you might take it for few days for granted here and there, practice days, and the next game you don’t feel as good.”

Notes: Winger Tage Thompson scored the Sabres’ only goal before the announced crowd of 6,846 fans. After Thompson’s power-play goal 14:40 into the second period, Pittsburgh’s Michael Chaput put the Penguins back up. … Ten Sabres made their preseason debut Friday, including Mittelstadt, Skinner, defenseman Rasmus Dahlin and winger Victor Olofsson. … Sabres goalie Craig Anderson started and stopped 18 of the 20 shots over 40 minutes. Backup Dustin Tokarski made six saves in the final period. … Granato said the Sabres planned to trim their training camp roster after Friday’s game, their third this preseason. More moves will be made early next week. … After Hinostroza moved beside Mittelstadt and Skinner, the line generated a Corsi For of 89.5%, according to NaturalStatTrick.com.