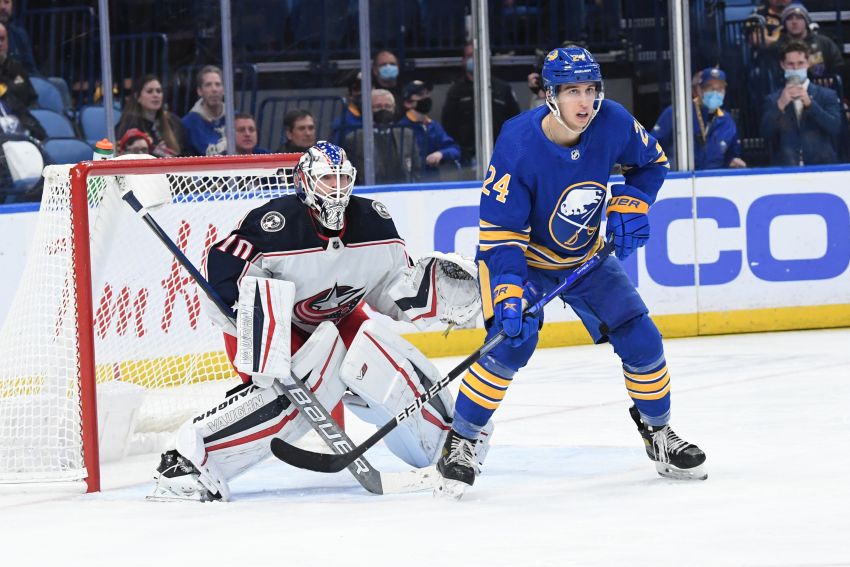 BUFFALO – Early in Monday’s 7-4 loss, Max Domi adroitly slid the puck between Dylan Cozens’ legs to himself and quickly fed Jack Roslovic. A second later, the Columbus Blue Jackets grabbed their first lead over the Sabres.

After Domi torched him inside his own blue line, Cozens, the Sabres’ second-year center, felt obligated to make amends.

“That’s on me so I felt like I needed to try and make it up,” Cozens said following the Sabres’ third consecutive loss. “I was a little frustrated at myself letting that happen so I just used that frustration as energy and tried to get one back.”

Cozens, 20, atoned 4:44 into the second period, shortly after the Blue Jackets scored three times in a span of 3 minutes, 17 seconds. The goal ignited the Sabres, moving them within 5-3.

When center Tage Thompson scored about five minutes later, it felt like the Sabres might pull off an unlikely comeback. While it fell short, the strong response from his young players impressed Granato.

In the past, Dahlin often had trouble letting go of mistakes. But since Granato took over last season, he has been pushing them aside, allowing him to play freely.

Having played 26 minutes, 41 seconds in Sunday’s 5-4 loss to the New York Rangers, Dahlin skated more than 26 minutes in back-to-back games for the first time in his career.

“He was good,” Granato said of Dahlin’s performances. “I mean, he looked like he was dynamic, he was in the zone. And that’s because he didn’t carry any mental stress, mental baggage. He goes out there and he feels like he can get opportunity, and we need the rest of the guys to do that.

“When you feel like you’re down and you can’t accomplish, you get tired a lot faster.”

The Sabres’ defense has often been downright atrocious over the last 10 games, allowing 44 goals, the NHL’s highest total dating back to Nov. 2. Three of those are empty-net goals.

No other team had allowed more than 37 goals entering Tuesday’s games.

In the past three contests, the Sabres have melted down for a few minutes in each second period. Before Monday, they allowed two goals in 1 minute, 22 seconds against the Rangers and three goals in 1 minute, 37 seconds in Thursday’s 5-0 loss to the Calgary Flames.

“We kind of just sit back and maybe get scared to make a mistake and we just keep letting them build momentum on us,” Cozens said. “We just kind of sit back. We’ve got to play the same way we played in the first and just go hard right out of the gates.

Subtracting an empty-netter the Seattle Kraken scored in its 5-2 win Nov. 4, the Sabres have allowed five or more goals in six of their last 10 contests.

Most nights this season, the Sabres have received strong goaltending. On Monday, however, Dustin Tokarski endured a rough night, allowing four goals on 12 shots before Granato yanked him 55 seconds into the second period.

After Granato pulled Tokarski from Thursday’s loss, he said, “Dustin was not the issue.”