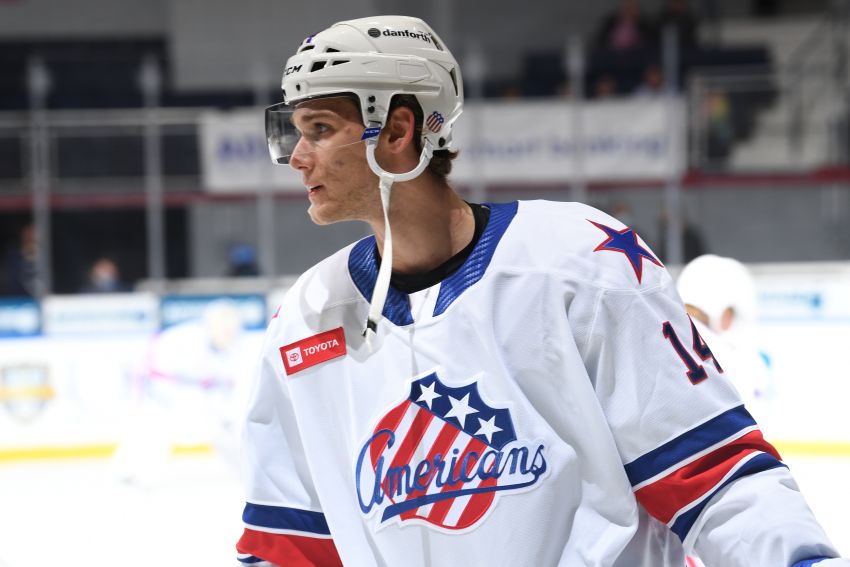 BUFFALO – After spending nearly four straight seasons in the NHL, Sabres center Mark Jankowski found limited opportunities as a free agent during the summer. Eventually, he settled for an invitation to the New Jersey Devils’ training camp.

After the tryout expired and the Devils passed on signing him, a chance to join the Rochester Americans materialized.

Jankowski said he and the Amerks’ coaching staff talked a lot. He liked what he heard and felt he would fit in. So on Oct. 15, he signed an AHL contract with Rochester.

“It just felt like the right fit to be able to go in there and get back to my game and earn a way back here,” Jankowski said on a Zoom call after skating with the Sabres on Monday morning.

Jankowski, 27, earned his way back to the big leagues after playing just 13 games with the Amerks. On Sunday, he signed a one-year NHL contract with the Sabres.

“Going in there, the coaching staff put a lot of trust in me and let me go and play my game, and I think I earned that to be here,” said Jankowski, who scored five goals and 12 points with the Amerks.

The 6-foot-4, 210-pound Jankowski was scratched for Monday’s 7-4 loss to the Seattle Kraken at KeyBank Center.

Jankowski said Amerks coach Seth Appert has created “an unbelievable environment” in Rochester. The Sabres’ affiliate, which features a mix of top prospects and veterans, has started this season 11-6-0-0.

“Just the whole atmosphere there, from the coaching staff down to all the equipment staff and all the players, such a great environment to be able to go to the rink every day and work your butt off,” said Jankowski, the 21st overall pick by the Calgary Flames in 2012.

Jankowski, who played four years at Providence College, offers the Sabres some much-needed depth down the middle. He can also play wing. To make room for him, the Sabres sent Arttu Ruotsalainen, who spent most of this season at center, to the Amerks.

Not surprisingly, Jankowski said he thinks of himself “as a good two-way forward.”

“A player who can be relied upon in the D-zone to play a good stretch of defense and be able to provide some offense as well,” he said. “I want to play hard, use my body to my advantage there, protect pucks down low and take pucks to the net. Just kind of do the little things right and go from there.”

The Amerks, of course, hoped those habits would wear off on prospects like wingers JJ Peterka and Jack Quinn. Jankowski, who recently centered Peyton Krebs, another top prospect, called Peterka and Quinn “two very special players.”

“You can tell how they are on the ice and behind the scenes, their work ethic, just how well-liked they are in the locker room,” Jankowski said. “Being young guys coming in, they’ve done a great job just working hard and earning everything they’ve got.

“You can tell if you watch the games, how special players they are and how much growth they’ve had since the start of the year. I think there’s a lot to be happy about for Sabres fans there.”

“We want to make sure Arttu is developing as fast as he can develop and we have access to him and the ability to put him in Rochester,” Granato said.

Granato and general manager Kevyn Adams told Ruotsalainen, 24, they haven’t lost any faith in him.

“We believe in him as a player and his potential,” Granato said. “We feel that he could help us and is going to help us in the future. It was clear that this is a simple decision that right now he’d be in a better spot for these reasons, A, B, C, we lined out here. He’s a competitive guy so it’s not easy to take that. You want to play in the NHL.

“But as we mentioned about Jack Quinn, when he got sent down, he embraced that and said, in some respects, ‘I want to go back there and play.’ You can work on some things you can’t work on here and you can accomplish some things that you set out to do there. I think Arttu is a competitive guy, will respond very well to that and it will help his game overall.

“I’m sure he was bummed out, but he’s a pro, too, in that regard so he’ll take it very seriously.”

After the Sabres recalled him last season, Ruotsalainen played 33 straight games in the NHL, including 16 this year. The Finn compiled five goals and 13 points in 13 games with the Amerks last season.