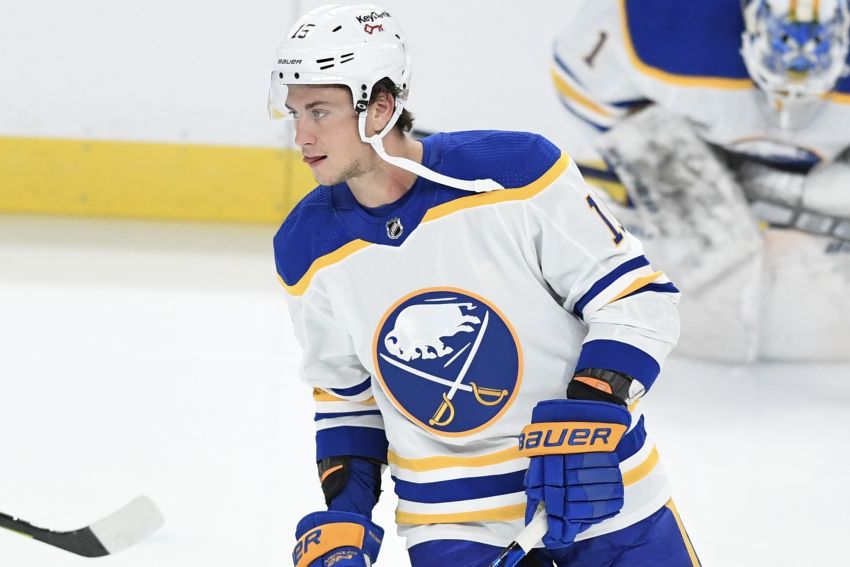 BUFFALO – Over the past three seasons, winger John Hayden bounced around the NHL, playing for the Chicago Blackhawks, New Jersey Devils and Arizona Coyotes before signing a one-year, two-way contract with the Sabres.

Hayden, 26, has usually served as a fourth-liner or an extra forward, never playing more than 54 games in a season. Still, he has stayed put in the NHL. Other than a 37-game stint in 2017-18, his first full pro season, he has always had a big league job.

“I feel fortunate to be here in Buffalo and help push this in the right direction,” Hayden said following Friday’s practice.

But in the coming days, the Yale graduate could be demoted to the Rochester Americans.

The Sabres have 16 forwards left in training camp entering this afternoon’s preseason finale against the Detroit Red Wings at KeyBank Center. Even if they keep 14 forwards on their 23-man roster for Thursday’s season opener against the Montreal Canadiens, Hayden could be the odd man out.

Sending rookie J-J Peterka to the minors and waiving Hayden for assignment to the AHL would get the Sabres to 14 forwards. Of course, they could keep Hayden and waive newcomer Axel Jonsson-Fjallby, a winger the Sabres claimed off waivers Monday.

But if the Sabres carry eight defensemen – Casey Fitzgerald established himself as a recall option before getting injured last season – 13 forwards would probably crack the roster.

Whatever transpires, Sabres coach Don Granato knows he will need to utilize depth players like Hayden, Fitzgerald and others this season.

“You just know the way the game is and the injuries that they’re going to be back,” Granato said. “And so it’s almost you start thinking about, ‘OK, let’s prepare, make sure our last guys are prepared for when we need them.’ …

“We have to make a decision on game one, and we’re going to have a decent player out that we feel, a guy that’s going to be ready is going to be sitting out. It’s just the way the numbers are with guys healthy.”

The 6-foot-3, 227-pound Hayden skated as an extra during Friday’s practice, taking reps on the top line beside center Casey Mittelstadt and Jeff Skinner for right winger Vinnie Hinostroza. While Hayden has mostly had a bottom-six role in the NHL, he believes he possesses the versatility to do anything, comparing his style to a “Swiss Army Knife.”

“Try to play in all situations,” said Hayden, who has compiled 13 goals and 31 points in 185 career NHL games. “Bring a physical edge but also play with the puck, a possession game and be as responsible as possible.”

Hayden showcased some of style in the preseason opener Sept. 28, carrying the puck to create the Sabres’ first goal. After grabbing it behind the net and skating up the boards to right circle, he moved down to the goal line and adroitly fed linemate Arttu Ruotsalainen at the crease.

Hayden clearly feels comfortable in Buffalo. He trains with ex-Sabres winger Matt Moulson during the offseason in Connecticut. Moulson, someone Hayden called a “mentor,” told him all about Buffalo.

When Hayden attended the Bills’ season opener Sept. 12, he learned the city meshes with his game.

“I’ve been to a Bills game, I’ve seen the passion,” said Hayden, a third-round pick by Chicago in 2013, 74th overall. “You can tell it’s a blue-collar sports town. So I think that fits my game. So I’m excited to be here.”

Hayden also knows Granato well, having played for him in 2012-13 with the U.S. National Team Development Program and again in Chicago.

“He’s … very, very in tuned with the team and his teammates, and he’ll do whatever it takes,” Granato said. “He’s an up-and-down, throwback-type player. Just a straight-line, hard-nosed guy. But he has a presence. Guys enjoying playing with him, on a line with him. He makes room for his linemates, teammates, and he takes a lot of pride in that.

“And he’s great off the ice, in the locker room. Guys migrate to him. So he’s got a lot of intangibles.”