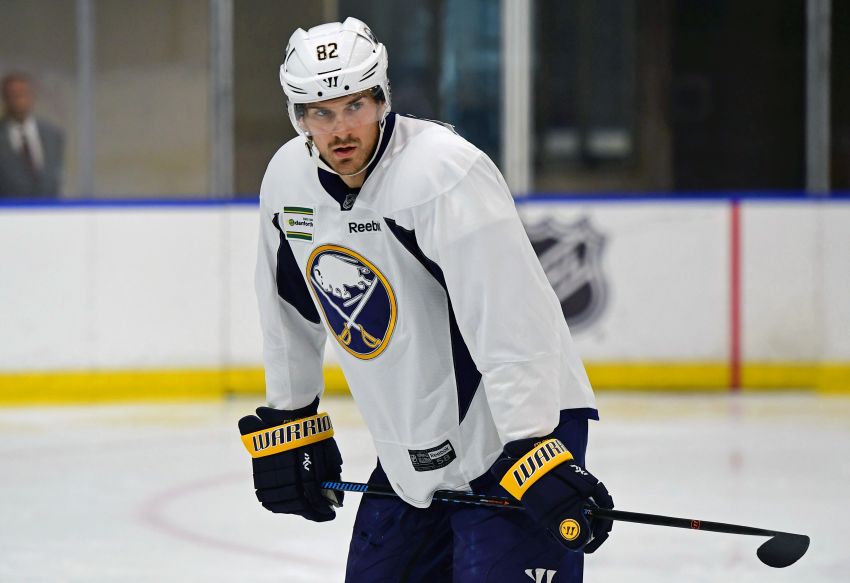 For a week or so, the 6-foot-3, 225-pound Foligno, would play an authoritative game and score, teasing he had arrived. Then he might disappear for a month or more.

So the affable Foligno, who always seems to be laughing or smiling, said he voiced some frustration. He talked to the coaching staff and tried to find answers. He wanted to define his role.

“I needed to get back to where I was,” Foligno, 25, said Thursday inside KeyBank Center. “I needed to be the forward on this team that’s a powerful forward.”

The positive criticism he received helped him.

“From there, I kind of never looked back,” Foligno said. “You got to look at the man in the mirror sometimes, and that’s what I did, just know that I got to get back to helping this team.”

That meeting helped ignite the best four-month stretch of Foligno’s career. Sabres coach Dan Bylsma quickly awarded him more ice time and responsibility. He finished with a career-high 10 goals and 23 points and skated around 15 minutes a game in the winter.

“(He) was … not sure of what his game is … and how he needs to play to be effective every night,” Bylsma said. “I think last season Marcus grew into that, and for the last 45 games grew into that on a consistent basis.”

Foligno settled into a regular role as the left winger beside center Johan Larsson and captain Brian Gionta, the team’s most consistent and sturdiest line in years. The checking combination, the third trio, should open the season together next Thursday at home against the Montreal Canadiens.

This season has a different feel for the Buffalo-born Foligno, who joined the Sabres for good late in 2011-12. Back then, the Sabres were a high-priced, underachieving club filled with veterans.

The ensuing years have often been difficult. The Sabres began gutting the roster in 2013, the start of a dramatic and difficult rebuilding process in which they became a laughingstock.

Foligno, a veteran of 267 NHL games, is one of two holdovers from an era long gone. Only winger Tyler Ennis, 27, has a longer tenure.

It’s no coincidence, either, the Sabres improved 27 points in 2015-16 with Foligno thriving.

The stability Foligno feels these days is special. Incredibly, Bylsma, who’s beginning his second season, is his fourth coach.

He added: “You get different coaches rolling in, you’re being told different things. I think when you have that steady voice with Dan behind the bench, it really helps out.”

Foligno’s line should also help out. As the Sabres constantly moved players for two or three years, they rarely had any reliable trios for more than a few weeks.

Foligno, Larsson and Gionta clicked right away when Bylsma put them together in the winter. While the line was often charged with shutting down the opponent’s best talent, it also has some offensive upside.

“We kept it simple every night,” Foligno said. “We knew that it was our job to maybe play a little bit more defense before offense. Defense contributed to offense, so we capitalized on a lot of our chances, just kind of snowballed from there, confidence grew with our line.”

To Gionta, Foligno seems poised for a breakout season.

“I think the biggest thing is he doesn’t know how good he can be or how strong he is out there,” Gionta said. “He just started to touch that surface last year. If he continues to progress and find confidence in himself, his game, I think you’ll see him take off.”