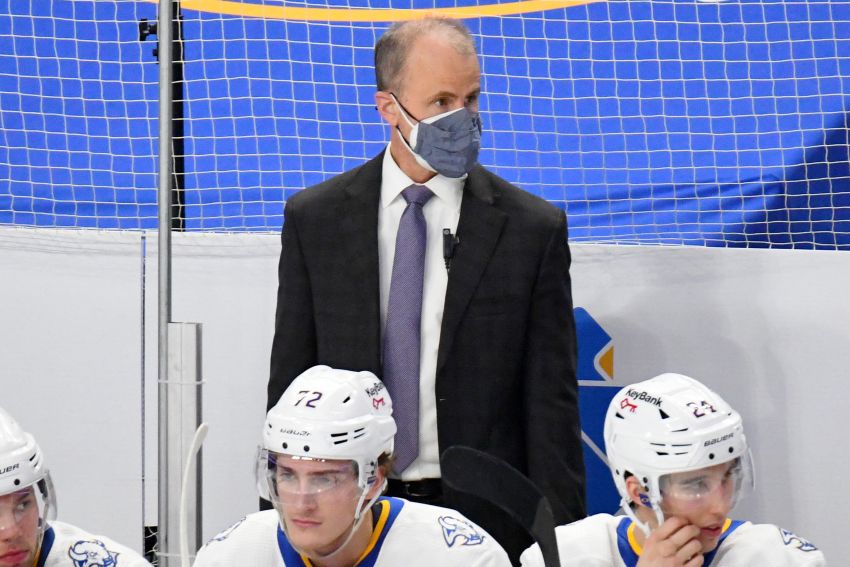 Right now, Don Granato must wait as Kevyn Adams conducts what could be an exhaustive search for the Buffalo Sabres’ next head coach.

The general manager reiterated last week he plans to talk to a lot of people, so it might take several weeks before he makes the most critical decision of his short tenure.

If Adams gets it wrong, it will likely set the franchise back years.

Granato’s work transforming the Sabres as interim coach earned praise from Adams, his players and others. A hapless team that endured a stunning 18-game winless streak finished the season on a 9-11-2 run.

The same group that appeared to tune out coach Ralph Krueger, who was fired 12 games into the embarrassing skid, embraced the aggressive, up-tempo system Granato installed.

“I commend Donnie a lot for the job that he did,” veteran Sabres winger Kyle Okposo said on a Zoom call May 10. “He was fantastic when he took over. He came in in one of the toughest situations that I’ve seen in 14 years of pro hockey and he came in and he did a heck of a job.”

Let’s face it, the Sabres likely won’t contend for the Stanley Cup in the near future, especially if Adams trades disgruntled captain Jack Eichel, center Sam Reinhart or Rasmus Ristolainen this offseason.

The young players who often thrived under Granato – defenseman Rasmus Dahlin and center Casey Mittelstadt, for example – could be their core stars moving forward.

“Donnie … wanted us to play a little bit differently and I think that as a group, we had a ton of young guys who really fed off that and who started to gain a lot more confidence and started to play a pretty good brand of hockey, I thought, toward the end,” Okposo said.

Clearly, Granato’s varied experience helped him seize his first opportunity to run an NHL bench. In the past 12 seasons, he has coached in the NHL, AHL, NCAA and junior. Granato, 53, has a unique understanding of the modern hockey player.

Given the Sabres’ current state and the emphasis on development, this could be the right time for Granato to become their permanent head coach.

Besides, would a veteran coach who likely has options to return to the bench – Gerard Gallant, for example – even want the job? Buffalo has become a coaching graveyard.

Adams might want will conduct his due diligence, and there are plenty of qualified candidates available. He might want to put his mark on the Sabres instead of hiring a coach he inherited.

Brind’Amour, 50, is in his fourth year as the Carolina Hurricanes’ coach and appears close to signing a contract extension with the Cup contender. But if he hits the market, Adams would likely want to pursue his former teammate in Carolina.

The 2007-08 Jack Adams winner as NHL Coach of the Year hasn’t coached since the Wild fired him last season.

Dineen, 57, was Adams’ teammate with the Columbus Blue Jackets. He’s in his second season coaching the San Diego Gulls, the Ducks’ AHL affiliate.

He enjoyed a successful three-year run in the Sabres organization, coaching their former AHL affiliate, the Portland Pirates from 2008 to 2011.

Dineen parlayed that gig into a head coaching job with the Florida Panthers. After winning the Southeast Division title in 2011-12, he was fired 16 games into his third season.

Before taking over the Gulls, he coached Team Canada’s women to an Olympic gold medal at the 2014 Sochi Games and won the Cup as an assistant with the Chicago Blackhawks in 2015.

If a Dineen-type candidate doesn’t sound attractive, consider some of hockey’s most respected coaches – the Boston Bruins’ Bruce Cassidy and the Pittsburgh Penguins’ Mike Sullivan, for example – returned to the minors after being fired from their first NHL coaching job.

Gordon, 58, left the Lehigh Valley Phantoms, the Philadelphia Flyers’ AHL affiliate, on Tuesday following his sixth season as coach. He filled in as the Flyers’ interim coach after Dave Hakstol was fired in 2018-19.

The ex-NHL goalie also coached the New York Islanders from 2008 until 2010.

Like Dineen, Gordon has paid more dues in the minors and could be ready for another opportunity in the big leagues.

Leaman, 48, has coached Providence College the last 10 seasons, leading the Friars to a national championship on 2015.

If Adams, who played college hockey at Miami, wants to go off the board, Leaman would be an intriguing candidate.

In the past six years, Hakstol, Jim Montgomery and David Quinn have all jumped from major NCAA programs to the NHL. Hakstol, who was fired 31 games into his fourth season, had the longest tenure.

Leaman was linked to the Sabres in 2019 before former GM Jason Botterill hired Krueger.

It’s hard to imagine Tortorella, whose temper might be more legendary than his long and successful coaching career, taking over a young team possibly years away from winning.

Tortorella won the Cup with the Tampa Bay Lightning in 2004 and was a Sabres assistant six seasons in the late 1980s and early 1990s. He also led the Rochester Americans to the Calder Cup in 1996.