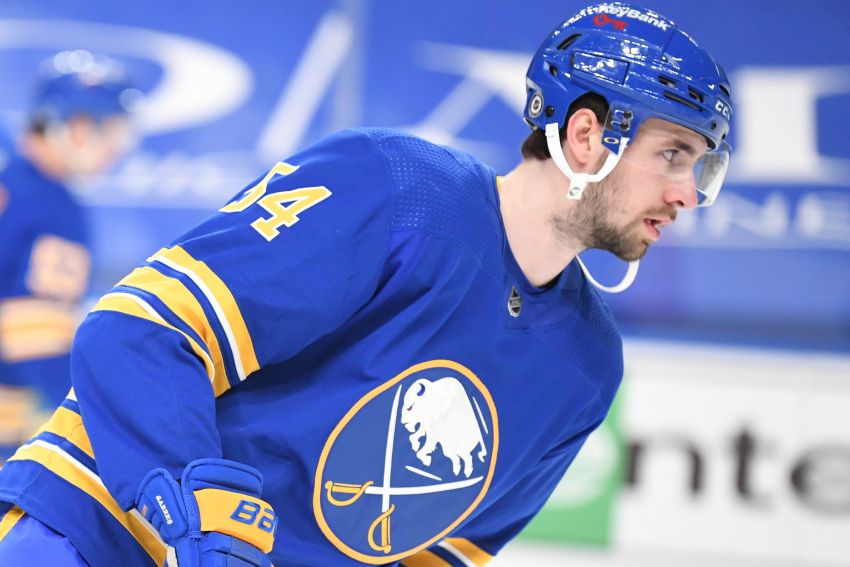 The coaches wanted Samuelsson, fresh off first NHL recall, to use the remaining games on the Amerks’ truncated schedule as a springboard back to Buffalo next season.

“OK, you did a good job in those 12 games, you got a taste,” Amerks coach Seth Appert said the coaches told Samuelsson. “Now come back for these four games and try to show that you’re done with the American Hockey League with your performance and how competitive you are and how well you play.”

Samuelsson, 21, showcased his competitiveness until the end. Early in Sunday afternoon’s season finale, a 2-1 win over the Utica Comets, he covered for goalie Michael Houser, throwing his 6-foot-4, 226-pound frame in front of a one-timer.

“It was 0-0, there’s a net-front scramble,” Appert said on a Zoom call Monday. “Houser’s down, the puck kicked to the side, and they’re hitting a one-timer. And he sold out his body, and that’s not unusual for him.”

Appert knows Samuelsson well, having coached him three years ago in Team USA’s National Team Development Program, months before the Sabres drafted him in the second round in 2018, 32nd overall.

“I have a high opinion and I have a history with him, so I know what’s inside that young man,” he said.

Appert said Samuelsson, who turned pro following his sophomore season at Western Michigan, is “very close” to cracking the NHL for good.

“But this summer’s huge for him,” Appert said. “He needs to make a statement at training camp that he has to be on the team. With the age he’s at and all that, he needs to make that statement.

“I thought in eight of the 12 games he looked like he’s ready to be a full-time NHLer, and in maybe in three or four he had some hiccups. And that’s part of the growth process of a young player.”

Samuelsson usually looked calm and comfortable with the Sabres, compiling two assists and a minus-8 rating while averaging 18 minutes, 2 seconds of ice time. The prospect mostly skated beside defenseman Rasmus Ristolainen – “He understands what I’m going through,” Samuelsson said – and also killed penalties, a sign of interim coach Don Granato’s trust.

“It was huge for me just going into the summer knowing what I’m going to have to do to play in the NHL next year and experiencing that,” Samuelsson said of the big leagues. “It’s a lot easier to prepare for something when you have a taste of it.

“Yeah, I feel like, for me, my summer and next year’s camp, that’s huge for me.”

Samuelsson’s willingness to be pushed – “The beauty of Mattias is you can be really hard on him,” Appert said – has helped buoy his development.

Appert and ex-Sabres defenseman Mike Weber, the Amerks’ assistant coach in charge of the blue line, dealt with Samuelsson bluntly.

“I was hard on him at USA, I was hard on him here,” Appert said. “He doesn’t resent coaching in that way. You can come in and he kind of has that way he has about him and he’ll be like, ‘All right, what do you guys got for me?’ And then … you give him the things he needs to clean up, you give him a few of the good things.

Samuelsson said the coaches are “on you every day.”

“They’ll get in your ear, whatever,” said Samuelsson, who recorded three goals, 13 points and a minus-8 rating in 23 outings with the Amerks this season. “But you know it’s for your benefit.”

Samuelsson probably learned that from his father. Kjell Samuelsson, a former NHL defenseman, played 813 games and has coached in the Philadelphia Flyers organization since the late 1990s.

“He has a calm to him that’s way beyond his years, but if you knew his father you would understand why,” Granato said last month. “He’s a player that benefited from having a father that was a very good NHL player. (He) also has stayed in the business. … I know that helps. He’s been around the game since he was a kid. He’s been in elite-level conversations since he was a kid.

“This is, you can see, it’s pretty second nature for him because he does have a really nice calm to him in the context of a pretty competitive environment.”