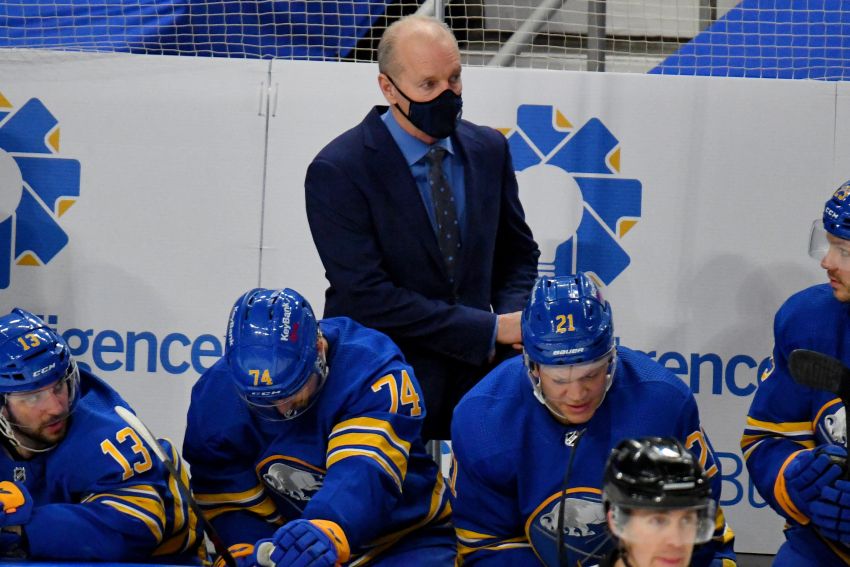 Kevyn Adams said Ralph Krueger “believed to his core” he could turn the Sabres around. ©2021, Micheline Veluvolu

Adams wanted to keep Krueger, a coach he said his players believed in and “really, really love.” The rookie GM stood by him for weeks, allowing the Sabres to implode and their losing streak to balloon to 12 games.

But Wednesday morning, hours after the Sabres’ 3-2 road loss to the New Jersey Devils, Adams knew he had to make a change and start overhauling what has become a rotten culture. He met with Krueger, 61, and dismissed him.

Adams named Don Granato, one of Krueger’s assistants, the interim coach. He said a search for a replacement will begin immediately.

When the Sabres arrive at KeyBank Center this morning to prepare for their game against the Boston Bruins, Adams said he will have a “very honest conversation” with his players. He’s clearly livid with them.

If they loved playing for Krueger so much, why did they abandon the on-ice principles he often spoke about and give so many soft, embarrassing efforts over the last month? Why weren’t they more accountable?

“And that has to be something that is just inside you and drives you to be better every single day. To love, to look around the City of Buffalo and see Sabres hats and signs and people wearing jerseys – that matters.”

Adams said that must become ingrained in the team’s DNA.

“I don’t care where we are in the standings right now,” he said. “If we do not show up at the rink tomorrow and for the rest of that season have that characteristic about our team, it’s going to be unacceptable. And that is going to be a message and something that I’m going to spend time on.

“As we evaluate players, as we scout players, that needs to be part of it. You just have to love to show up every day and want to compete and be a Buffalo Sabre.”

The Sabres own an awful 6-18-4 record. They’ve lost 16 of 18 games since their COVID-19 pause ended. They will almost certainly tie a league record by missing playoffs for the 10th straight season.

Adams said Krueger “believed to his core that he could turn this around.”

“But my job was to tell him where I felt we were and have an honest conversation,” he said.

The Sabres also fired assistant coach Steve Smith, who was in charge of the defensemen.

“It was just getting a fresh perspective, different voice,” Adams said of letting him go. “Steve’s been here a few years.”

While Adams is unhappy with his players, he knows everyone in the organization must improve.

Adams, a Clarence native, said the Sabres must build an identity and create a special environment.

“(The) players love playing, they compete hard, the fans love watching it and it’s all connected,” he said. “I know, I’ve seen it in this town before. I know what that does for our fan base, and I understand that and we’re not there. …

“Every part of our organization has to better, and it starts with me. The accountability factor is something that is real and we all have to understand that. And it’s not saying, ‘Oh, if this guy was better over here or they were better or there.’ It’s all of us looking in the mirror.”

The Sabres’ next coach will be their sixth in eight seasons. Krueger ended his tenure with a 36-49-12 record.

In Adams and Krueger, Sabres owners Terry and Kim Pegula thought they possessed a GM-coach duo that would last years, not months. While Adams inherited Krueger, they developed a strong relationship and worked well together, teaming up nine months ago when the Pegulas’ mass firings created a skeleton staff.

The Sabres, despite an awful five-on-five attack, enjoyed a solid start this season, entering their COVID-19 pause with a 4-4-2 mark. But they quickly regressed after the break, losing their first three games. They haven’t won since Feb. 23.

As the losses piled up, it became only a matter of when, not if, Krueger would be fired.