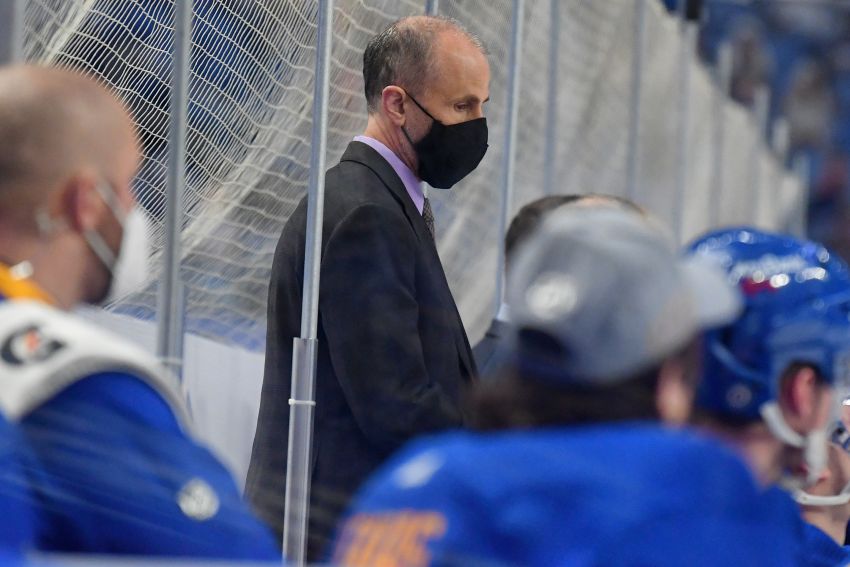 Don Granato parlayed one season in Peoria into an AHL job. ©2021, Micheline Veluvolu

When Trevor Baker learned the Buffalo Sabres had promoted Don Granato to interim head coach, the enduring memories of the championship season they spent together flooded into his mind.

Twenty-one years earlier, Baker was a raw rookie forward for the Peoria Rivermen, an ECHL team led by Granato, a 32-year-old head coach and general manager.

Baker would enjoy a successful eight-year pro career, but in 1999-00 he was learning the rigors of pro hockey. Granato set him on the right path, teaching him how to play defense and giving Baker what he called “the right tools to keep going.”

So when Baker reflected on Granato’s 24-year coaching career after hearing the news on March 17, he felt a sense of excitement knowing his friend had earned an opportunity to run an NHL bench.

“It was a good moment for me to just kind of smile and say, ‘Good job, Gratsie … you got there,’” Baker said.

Granato spent just one season leading the Rivermen, the St. Louis Blues’ ECHL affiliate at the time. After they captured the Kelly Cup, the Blues promoted him to the Worcester IceCats, and he earned AHL Coach of the Year honors in 2000-01.

The Blues moved Granato up again in 2005, this time to the NHL as an assistant coach.

That memorable 1999-00 campaign helped set him on a path to the big leagues.

The young coach coveted players who looked forward to coming to the rink and were excited for what the day might bring.

It was also a tight-knit group that grasped the straight-shooting Granato’s message right away.

“We all hung out with each other pretty much and the guys got along,” Baker said. “And his message right from like Day One was, ‘This is our goal.’ And right from Day One, five games in, I think everyone believed that we have a really good team here.”

Defenseman Dan Hodge said “everyone bought in at the same time.”

Granato, having coached a championship team, the Green Bay Gamblers, in the junior United States Hockey League, saw signs of a special group in the Rivermen.

“You work hard to get the players and team to a point where they take over,” he said. “If you do things right as a coach, you relinquish kind of the ownership and is a hand off to the team, and every championship team I’ve been a part of and those I hear of, that’s the case in some way, shape or form.

“And that was the fun part of that team, where you just almost as a coach, step back, because the train is rolling and you get to enjoy it.”

Granato knew how much rope to give his players and trusted them, helping him establish a special relationship with the team.

“We had such a tight group,” said goalie Duane Derksen, who won a national championship with Granato during their playing days at Wisconsin. “Everybody had just as much fun off the ice as we did on the ice. He always made sure there was a balance there.”

Derksen laughed and wondered if Granato would be upset with him for sharing one of his favorite minor league hockey stories.

In the dog days of the season, the Rivermen experienced Bourbon Street for several hours one night during a long southern road trip. Prior to a game against the Baton Rouge Kingfish, Granato told his players the team bus would go back to New Orleans for the night if they won.

“Everybody’s like looking around, ‘Is this real? Is he really saying?’” Derksen said. “So needless to say, after the first period, it’s 4-1 for us. We could’ve beat the ‘80 Russians, for crying out loud. The guys were flying! We ended up winning the game 6-2.”

In the grind of a marathon season, Granato knew his players deserved a reward. The Rivermen weren’t fighting for a playoff spot and beating Baton Rouge wasn’t a huge task. He simply wanted to give them incentive and let them enjoy themselves.

“It was more like, ‘You know, hey, they can handle this, there’s a level of maturity here and respect. And I know if I offer it to them they’re going to be respectful, reciprocate,’” said Granato, whose Sabres close the season this afternoon against the Pittsburgh Penguins. “And they were. It was a great time.”

In the Kelly Cup final, after the Rivermen lost the first two games at home in the best-of-seven series, Granato said some players came in his office and told him not to worry, they would win the series.

The Rivermen had to travel to Lafayette, Louisiana, to play the IceGators, who hadn’t lost at home in five months.

“Those players had that confidence with substance where they knew they could win, and that is very rewarding as a coach to see that and feel that,” Granato said. “And that’s why they were special.”

The Rivermen won all three road games and clinched the championship in Game 6 at home in overtime.

To Derksen, Granato did a masterful job coaching the Rivermen that season.

“It definitely had something to do with hockey, but it was just more about everybody was building relationships, building trust in one another and Donnie was orchestrating it all,” he said. “He knew which buttons to push. No matter what level you’re at, it’s a very challenging thing to do. But he’s an extremely smart hockey guy and can know how to manage stuff like that.

“I know that translates different into the NHL level, but at the same time, it was awesome, it was just really awesome.”