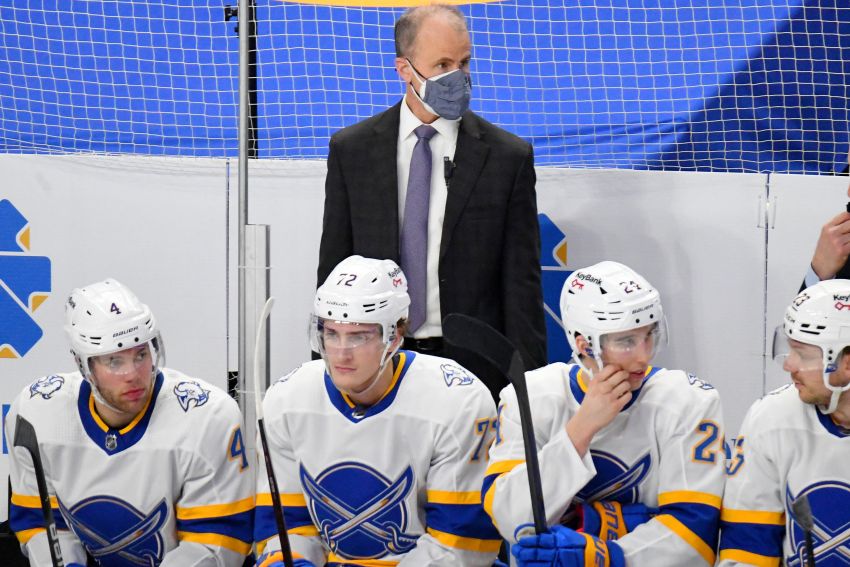 BUFFALO – Instead of having a day or two of practice and preparation prior to his first game as interim Sabres coach, Don Granato had one meeting just two hours before the opening faceoff.

On Thursday, a day after the Sabres fired coach Ralph Krueger and named Granato, 53, his interim replacement, a member of their hockey staff entered the NHL’s COVID-19 protocol. The Sabres, who had Wednesday off, canceled their morning skate and stayed home.

They did not learn they would be playing until about 12:45 p.m.

So Granato’s first meeting with his players was focused on game prep for the Boston Bruins.

Granato, a hockey lifer who has been a head coach in the AHL, ECHL and junior, has inherited a mess. The hapless Sabres have lost 13 straight games and 17 of 19 since their COVID-19 pause ended.

“It’s a challenge and an opportunity, and I’m excited for it,” Granato said of his opportunity. “Obviously, there was a level of anxiety upon taking the position.”

But Granato said he felt a calmness as he starting scheming and game planning in his head.

“It feels just like any other team I’ve coached in any other situation with respect to the inner challenges as a head coach, how you operate as a head coach,” he said. “Obviously, circumstances are different in this situation and that’s the nice thing about having years and years and years in the business is there is a comfort and you see patterns that you’re familiar with.”

A glaring lack of effort has buoyed the Sabres’ recent pattern of losing. How can Granato get them to simply compete?

“They feel responsible for where they’re at, they take responsibility for that,” he said. “I feel that puts me in a real good position. … I’ve always felt in the past, I call it even a ‘push capacity.’ How much can you actually push a guy, how much can he take, how much does he really want to resolve issues or want to become a player or score a goal? And with certain guys, you can push really, really hard, and with other guys you can’t.”

Sabres general manager Kevyn Adams said Wednesday the search for Krueger’s replacement would start immediately. Granato refused to say if he would like to be considered for the job. He simply wants to stay in the moment.

“The coaching world, our job, it’s almost like your reputation is on that scoreboard every night,” he said. “So you can’t think too far. To me, I love the challenge of trying to come in here and make improvements and get things to a more comfortable, confident position – whatever you may say – and I’m fully engaged in that. If I do that and it’s satisfactory to the team, the organization and I’m here, great.

“But my goal is today, what do I have of decision-wise today? And I will remain focused on that. I’m not worried about six, seven months from now.”

“He’s ran our power play now and I have a lot of respect for him, the way that he coaches that specific part of the game, how detailed he is but at the same time he doesn’t overload us with information,” Hall said. “We’re not looking at hours of video. It’s very succinct and it’s very precise and we know what we have to do when we go out there on the power play.”

Hall, who took a slap shot from teammate Colin Miller in the jaw Tuesday, needed stitches to sew a large gash. Hall returned later in the Sabres’ 3-2 loss to the New Jersey Devils after undergoing X-rays.

“It’s pretty swollen,” he said. “Yeah, all in all I’m pretty lucky. None of my teeth were even loose and my jaw got out of it without any fractures or breaks or anything like that. I think when it first hit me my first thought was, ‘Oh, my jaw’s broken’ and I’m not eating any solid food for a while.’

“But we got to the room and took some X-rays and they were negative and then got stitched up and tried to come back and play. It’s really difficult to play well after you’ve been in pain for an hour, been sitting and getting stitches.”

Jokiharju, 21, has sat out seven of the last eight games.

The Sabres recalled Bryson from the taxi squad and sent Davidson to the practice group before the game.