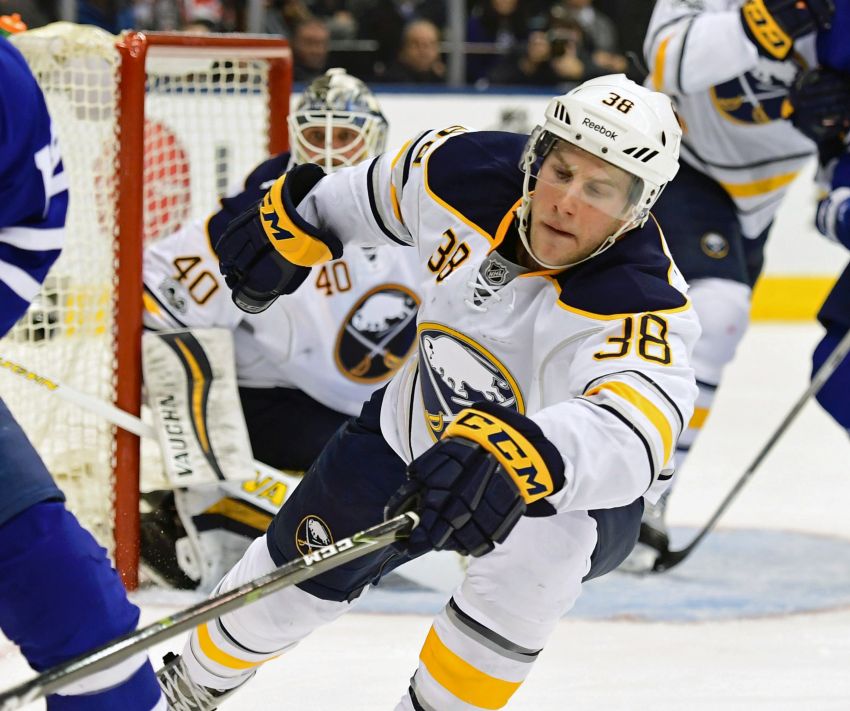 BUFFALO – Shortly after enjoying the longest stint of his NHL career, defenseman Taylor Fedun re-signed with the Sabres early in the summer, inking a two-year deal.

What made the contract significant wasn’t just the length – many depth players don’t earn multi-year deals – but the fact a new regime offered it.

Fedun, 29, provided valuable depth last season, playing 27 NHL games, 12 more than the previous three seasons combined. In the AHL, a league Fedun has showcased his slick talents in since 2012, he scored five goals and 23 points in only 29 contests.

But Fedun compiled his career-best campaign under former general manager Tim Murray and coach Dan Bylsma, who were fired April 20.

“Having to re-sign with the old regime and coming in with new faces, it would’ve been even more difficult to know where I stand,” Fedun said Monday following practice inside HarborCenter.

Clearly, the 6-foot-1, 201-pound Fedun feels comfortable here. Given his contributions impressed Botterill, he could be a favorite to earn an extra defense spot.

Coach Phil Housley, who wants to showcase a fast five-man attack, hasn’t decided how many defensemen the Sabres will carry out of training camp. Jake McCabe is injured (upper body, week-to-week) and questionable for the season opener Oct. 5. Marco Scandella, meanwhile, is months removed from hip surgery and has been resting at times during camp.

The Sabres also begin a four-game western road swing Oct. 12, so Housley might want to keep an extra defenseman or two for that trip. It wouldn’t be shocking if they kept eight.

That leaves Fedun battling with Justin Falk, camp invite Cody Goloubef and Matt Tennyson for one or two spots.

“The way they want the game to be played is basically exactly the way I like to play,” Fedun said. “So hopefully … I get a chance to show that this is a good style for me.”

The position is so demanding and rugged defensemen are always at a premium. The Sabres used 12 last year, giving Brady Austin and Erik Burgdoerfer their first NHL action.

Botterill improved the Sabres’ defense depth so much, top prospect Brendan Guhle, a youngster many thought would be an NHL mainstay this season, has already been assigned to the Rochester Americans.

Here’s more on the defensemen fighting to remain with the Sabres:

After starting last year in the minors, Falk, 28, morphed into one of the Sabres’ biggest surprises, playing 52 games as injuries ravaged the blue line. He looked so impressive Murray gave him a one-year contract extension during the season.

“You don’t get too many opportunities left in this game, and I got one last year and tried to make the most it, felt I had a good year,” Falk said. “Management and coaching staff at that time liked what they saw in me.”

“He’s demanding a lot out of all five guys on the ice,” Falk said. “At times, you play a system where one or two guys, after you make a play, you can kind of ease up a little bit, let the other guys work. But here, it’s all five guys are involved at all times, jumping in the rush and helping out and being active in O-zone.”

“No matter what camp you’re going to, whether you’re on a contract or you’re not, there’s only a few guys that are guaranteed jobs,” he said.

The 6-foot-1, 196-pound Goloubef, who played 33 games with the Colorado Avalanche last season, believes he fits well in Buffalo because he can “skate and think the game.”

“That’s a big part of making any team nowadays, the game’s fast and you got to be able to think,” said Goloubef, who has played two exhibition games.

Tennyson, 27, has played three of the first four exhibition contests, recording a goal and two points and playing special teams.

“(I’m) a two-way guy, jump in the play when you can, but be able to play solid in the D-zone,” said Tennyson, a veteran of 105 NHL games. “I think Phil’s system is pretty much that. He wants guys jumping up in the play, playing fast, playing offense.”

The 6-foot-2, 205-pound Tennyson played a career-high 45 contests with the Carolina Hurricanes last season. He signed a two-year contract with a two-way deal this season and a one-way deal in 2018-19.

Two-year contracts are attractive to the player and can also scare teams away from claiming them on waivers.