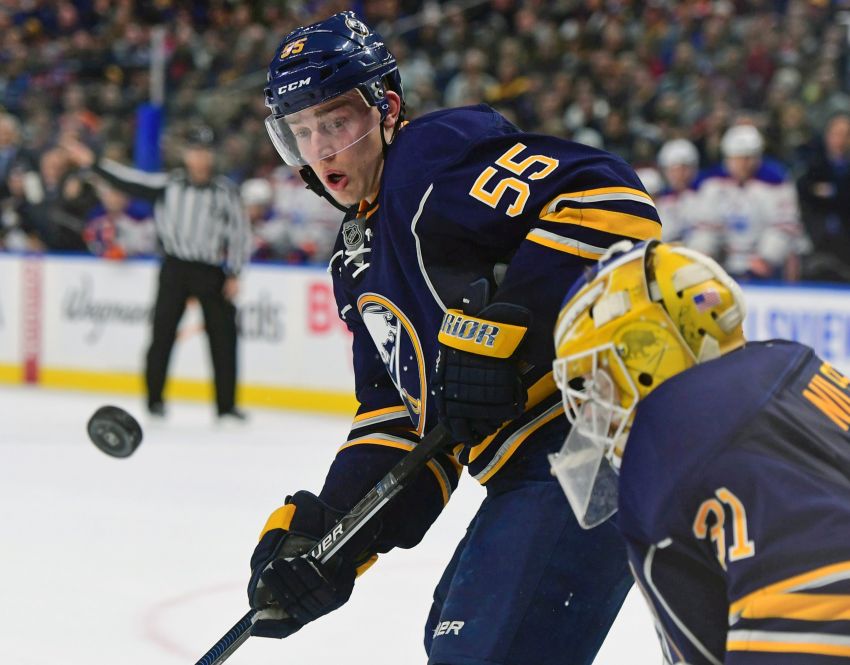 In the near future, if Ristolainen becomes an NHL All-Star or garners serious Norris Trophy consideration, remember the torrid run he is enjoying entering tonight’s tilt against the Carolina Hurricanes at KeyBank Center.

Ristolainen has three goals, two overtime winners and 14 points while averaging a whopping 27 minutes, 41 seconds of ice time over the last 10 games.

The stretch, one of the best by a Sabres defenseman in recent memory, has vaulted Ristolainen, 22, into the elite company.

Consider: Ristolainen is tied for third among NHL defensemen with 23 points and 20 assists. The Finn’s average ice time of 26 minutes, 41 seconds ranks fifth among all skaters.

Right now, Ristolainen leads the Sabres in assists and points. Winger Kyle Okposo, whose 13 assists rank second, is one point behind. A defenseman has never led the Sabres in scoring, although Hall of Famer Phil Housley finished second three times in his eight-year Buffalo career.

After scoring a goal and two points in Tuesday’s 4-3 shootout loss in Florida, Ristolainen is on a 61-point pace. The Sabres haven’t had a 60-point defenseman since Housley scored 81 in 1989-90, a franchise record for the blue line.

Ristolainen, who usually says little about himself, hasn’t set any goals for a point total.

“I just want to make it to the playoffs,” he said.

The Sabres rely on Ristolainen for a huge portion of their offense. He has assisted on 31.3 percent of the goals he hasn’t scored this season, a number that trails only Edmonton’s Connor McDavid (33.3) and Ottawa’s Erik Karlsson (32.9).

Like those superstars, the 6-foot-3, 201-pound Ristolainen has produced offense playing difficult minutes against the opposition’s top talent every game.

“You look at what he does on the ice and the players he plays against and to still be able to produce at the rate he does, it’s impressive for a young defenseman,” Sabres winger Evander Kane said. “I see nothing but good things in his future.”

O’Reilly said: “You look at everything he does out there – offensively, defensively, tough to play against. You get his best game every time he’s on the ice. He’s just a complete player.”

Ristolainen was on similar pace last season – he had seven goals and 24 points on this date a year ago – before tailing off during the winter and finishing with nine goals and 41 points.

Why could Ristolainen showcase more consistency this season? His body is better conditioned to handle the rigors of playing mega-minutes every night.

Ristolainen added: “I try to work my (butt) off every summer and get stronger, faster.”

Bylsma said Ristolainen is “a tireless worker off the ice.”

“He’s a workout machine in the summertime and even during the season and builds that base for him to be able to be a strong, heavy player,” Bylsma said.

Incredibly, thanks to five overtime games, Ristolainen has played 28 or more minutes in five of the last eight contests.

“He’s a guy who he’ll take as much as you can give him,” Bylsma said. “The overtimes, it seems like he can keep going and going and going. Nothing stops him. He gets a 30-second breather, he’s back out there again. He ends up with 28 minutes (Tuesday).”

Ristolainen said: “I can play more than 30 (minutes).”

The Sabres keep falling behind early and roaring back. Tuesday against the Panthers, they trailed 2-0 before racing back to take a 3-2 lead.

“You felt it coming from our team,” Bylsma said. “The guys were jumping over the boards, wagging the tails and kind of had a belief we were going to win that game.”

The 12th-place Sabres (32 points) trail Carolina by one point in the Eastern Conference standings.