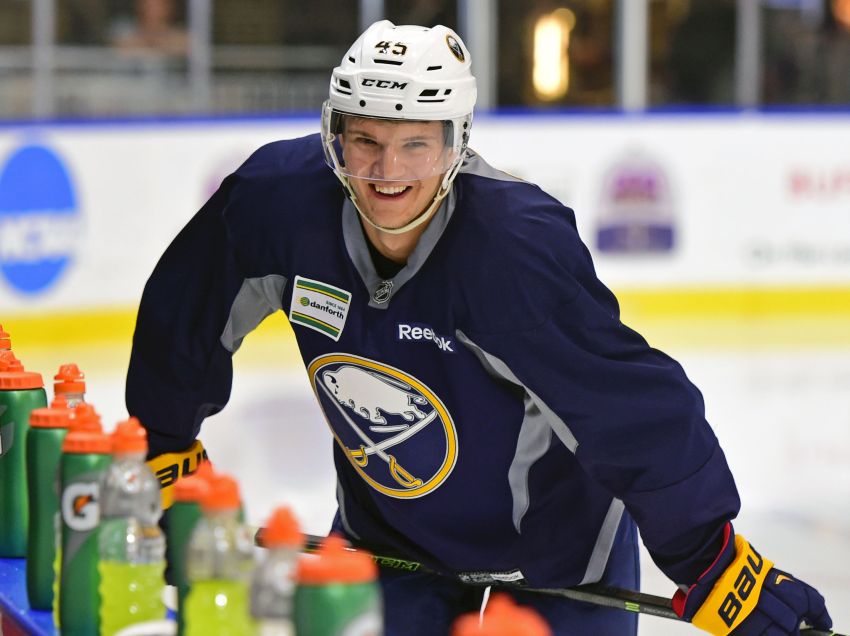 Brendan Guhle’s splendid play over the past four months starring for the junior Prince George Cougars helped convince his coach, Richard Matvichuk, the Buffalo Sabres’ top defense prospect is ready for the NHL.

Guhle, 19, skates with so much composure during his 25 to 30 minutes of ice time, Matvichuk said, he brings calmness to his teammates. The 2015 second-round pick has also morphed into an offensive force, scoring 12 goals and 28 points in 30 contests with the first-place Western Hockey League club.

But something else tells Matvichuk, a veteran of 15 NHL seasons, Guhle is ready to join the Sabres next season.

“He’s a very respectable young man,” Matvichuk, a former defenseman, told the Times Herald by phone Monday. “He’s mature for his age. You can tell that he’s ready to be a pro. You can look at other 19-year-olds, you kind of think, ‘Ah, is he ready? Ah, maybe not.’

Guhle, who played his first three NHL games as an emergency recall in December, is expected to join the Sabres for regular duty next season, something he probably should’ve enjoyed this campaign.

It can be argued the Sabres, whose blue line is their Achilles’ heel, made a huge mistake sending Guhle back to the WHL in October.

“He’s an elite player at this level,” Matvichuk said. “There’s a reason why he’s played the games he has in the National League just because of his ability. He is that good.”

Matvichuk hopes those elite talents keep buoying the Cougars, who have home ice advantage in the playoffs for the first time since 1999-00. The final weeks of Guhle’s junior career promise to be exciting.

A long playoff run would cap a season Guhle said has been “pretty nuts.”

Following another impressive NHL training camp, Guhle nearly made the Sabres for the second straight year. In fact, just days before the season opener, it appeared they would keep him – the collective bargaining agreement allows a nine-game look – for a bit.

Instead, Guhle rejoined the Prince Albert Raiders, one of the WHL’s worst teams. Matvichuk and the Cougars, meanwhile, wanted him badly. They got him in a trade Nov. 18.

“They knew I wanted to go somewhere where I could win,” Guhle said of the Raiders. “They were generous enough to do that.”

Guhle had barely settled in with the Cougars when the Sabres, down three defensemen, summoned him. No one seemed to know Guhle was allowed to be recalled.

Matvichuk told a stunned Guhle he was going to the NHL.

“The expression on his face is something I’ll never forget,” he said.

Guhle looked comfortable with the Sabres, showcasing his speed, an element their defense sorely lacks.

“I think maybe I played pretty well, definitely had a lot of fun while I was up there,” Guhle said. “They gave me good feedback, so it’s positive.”

Still, Guhle doesn’t think he has already locked up a roster spot for 2017-18.

“I don’t want to tell myself I’m ready and then come in next fall and be like, ‘What the heck? What happened?’” he said.

The brief exposure to the NHL, Matvichuk said, helped Guhle, who’s an “offensive threat every time he steps on the ice here.”

“They put him in a role where he almost had to play more of a defensive situation but use his skating to his ability,” he said. “When he got back here, it was like a switch went off knowing that he has to play a full 200-foot game to be successful – his puck retrievals, his first pass.

“When he got here, everything was just automatic. It was just great.”

Guhle, however, had difficulty adjusting to his first long-term injury, an ankle problem that sidelined him 28 days, he said.

“That was my first injury that kept me out over a week or two,” he said. “It was pretty different. It was definitely weird not going on the ice.”

“A good situation for me, a lot of good opportunities,” Guhle said. “I was fortunate to get traded to a good team like this.”

Matvichuk on why Guhle’s offensive talents have grown in Prince George: “It’s the way he skates, his ability to get up and down the ice. We kind of play a high-tempo that we want our defensemen to join the rush as that fourth attacker every time we can. His first three strides are explosive that he’s up in the rush. Knowing, as a coach, you kind of give a guy like that a little extra leeway.”

Matvichuk on Team Canada leaving Guhle off its World Junior Championship roster in December: “Very surprised. For me, he’s an elite player at this level, one of the best in our league. Not sure if it was because the record in Prince Albert, what it was. It was shocking for me.”