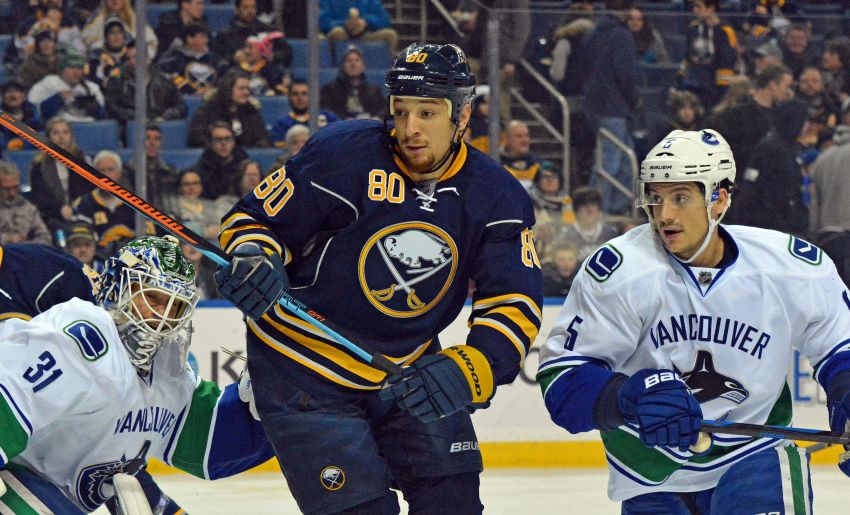 BUFFALO – Sabres winger Chris Stewart will leave town with no regrets, he said. Despite some tough times in Buffalo, he enjoyed playing here.

The Sabres will likely deal the honest veteran today before the 3 p.m. trade deadline, ending his one-year run with the rebuilding club. He’s excited about the fresh opportunity a trade could bring him.

A year ago at the deadline, St. Louis, a team built to win the Stanley Cup, dealt Stewart to the lowly Sabres. Missing the playoffs – all that excitement and prestige – bummed him out.

Now Stewart, perhaps the best available rental in a weak crop, could receive another crack at the postseason.

“If it does happen, I’m chomping at the bit,” Stewart told reporters Saturday in Florida. “I think that’s why all of us play. We want to win a Stanley Cup, we want to play playoff hockey. That’s the best time of the year. It’s no fun going home and watching it, that’s for sure. I’m sick of watching it last year. So I’ve seen enough. I want to play in it, represent my team and my family, play fun hockey.”

Stewart is Sabres general manager Tim Murray’s biggest chip, at least among players with expiring contracts. The 27-year-old has 11 goals and 25 points in 61 games, decent numbers.

Still, the 6-foot-2, 231-pound Stewart has been performing like a strong first-liner since around mid-December, when Sabres coach Ted Nolan challenged the powerful forward to stop playing a soft game.

Stewart responded, and he has eight goals and 20 points in last 34 games, including two goals and three points in the last three contests. He struggled early, scoring only three times in his first 33 games. He was even a healthy scratch Dec. 9.

“I’d say the last 30 games has definitely been a more body of work of who I am and what I can be in this league,” Stewart said. “The first 30 was tough, it was frustrating.”

Based on two weekend deals for upcoming free agents, Stewart should bring the Sabres a strong return.

On Saturday, Chicago traded a 2015 first-round pick and a good defense prospect to Arizona for winger Antoine Vermette, who has 13 goals and 35 points. On Sunday, Washington dealt 2015 second- and third-round picks to Calgary for winger Curtis Glencross, who has nine goals and 28 points.

Waiting is the hardest part for Stewart. The Sabres had a day off Sunday in Tampa Bay, where they play the Lightning on Tuesday.

“I think I’m going to sit around and wait for that call, I guess,” Stewart said. “It’s never a call you want to get. Like I said all year, it’s out of your control. I’m not going to say I’m expecting it. But I definitely won’t be surprised if I get that call.”

Stewart is one of nine Sabres who will be unrestricted following the season.

In an interview with WGR on Thursday, Murray said, “I don’t foresee them all being traded, but there’s certainly interest in some.”

He also said: “I’m shopping for futures for the organization. We’re in 30th place.”

Here are some other free agents who could be dealt:

Goalie Michal Neuvirth: With most teams set in net, the market for netminders is very small. Neuvirth has been playing like a No. 1 since the Sabres traded Jhonas Enroth, posting a .942 save percentage in eight starts.

Even if Neuvirth is worth a high pick or a good prospect, the Sabres might want to keep the Czech and try to re-sign him. They need a goalie badly for next season. Neuvirth is probably their best option.

Center Torrey Mitchell: The Montreal native can play center or wing and would be a nice addition to a contender’s third or fourth line. In Buffalo, the speedy checker has been a No. 2 center recently. The Sabres, who have plenty of cash to spend, might want to re-sign Mitchell.

Defenseman Andrej Meszaros: At $4.125 million, the Czech might be the NHL’s most overpaid player. But he has found a groove recently, playing his best hockey all season. He has two goals in the last two games after scoring one on his first 41 appearances.

Defenseman Andre Benoit: The late-bloomer, like Meszaros, was a disaster for months. But playing beside Zach Bogosian has rejuvenated Benoit, who’s a year removed from a 28-point season with Colorado.

Teams always needs extra defensemen in the playoffs. Benoit could almost certainly be had for a low pick.

Sabres prospect Mark Pysyk, who was briefly hospitalized Saturday after collapsing during a pickup basketball game in Rochester, thanked his fans for their support Sunday.

“Pretty scary day. Thank you everyone for the love and support. Feeling a lot better today! #ballsohard,” the defenseman tweeted.