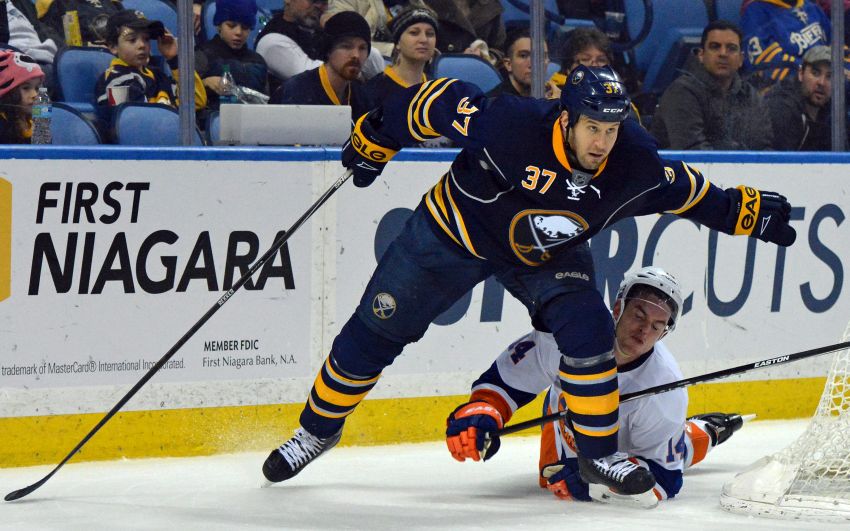 BUFFALO – Matt Ellis considers himself a realist. At 33 years old, the center understands the Sabres have younger and more talented players they need to examine.

That’s why the veteran of 330 NHL games spent four months this season mentoring the organization’s AHL prospects in Rochester.

“To be perfectly honest, I enjoyed the role that I played in Rochester,” Ellis said Monday inside the First Niagara Center.

“You got to be happy for people when they get their opportunities, to stay patient, work hard,” Ellis said. “Good things will come. They happen, and I was able to find my way back again.”

Ellis found his way back to the NHL a month ago. He went back to the Americans for a two-game stint during the NHL All-Star break, but the Sabres summoned him again when it ended.

Tonight’s road contest against the New Jersey Devils will be Ellis’ 14th NHL appearance this year. Like last season, when he played the final 50 games, Ellis might be here to stay.

The Sabres want Ellis for the same reasons he’s an asset with the Amerks. He offers the rebuilding club some hard-to-find stability. He can teach young players to be professionals on and off the ice.

“I understand at this point of the game what I bring to the table, whether it’s on the ice or off the ice,” Ellis said. “I think that’s part of the reason I found myself back here is some of those intangibles. I think I’m definitely going to take the ball and run with that.”

Ellis has been playing a fourth-line role, skating almost eight minutes a game.

“He plays the game the right way,” Sabres captain Brian Gionta said. “No matter what, he’s doing it with his heart. It rubs off on everybody.”

“Having Matty around here to talk to some of the kids and how to be a pro has been beneficial.”

Nolan added: “The one thing people have total control over is their attitude. Matty has control over his attitude, and it’s so positive. Obviously, he was disappointed when we sent him down. But he went down there as a true pro.”

Ellis’ tenure ranks third on the Sabres behind Kaleta and Weber. He joined the team on waivers in 2008 and has experienced just about everything with the organization, playing 72 games on the Sabres’ 2009-10 Northeast Division championship team and captaining two AHL affiliates.

“To get this thing turned around headed in the right direction is something I’d love to be a part of.”

Naturally, Ellis has envisioned the last-place Sabres’ revival. It’s hard not to with some of the league’s best young talent around.

“You kind of think about where things are headed,” Ellis said. “You see bright spots with a lot of the young talent coming up, you know what’s on the table. It’s an exciting time to see the (Nikita) Zadorovs, the (Zemgus) Girgensons and the (Rasmus) Ristolainens starting to develop their game at this level. …

“I’m part of the organization, but I’m also a fan as well. I like to see those guys taking those next steps.”

Ellis will be a free agent following the season. Sabres general manager Tim Murray has said dealing an expiring contract is prudent business. Ellis’ name hasn’t received a lot of attention, but he could be worth a low draft choice for a contender looking to add some veteran depth.