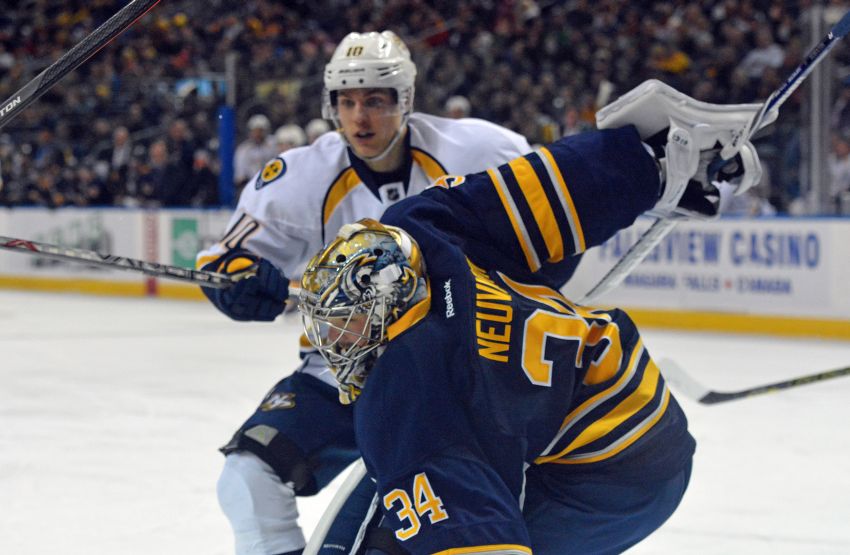 BUFFALO – If the Sabres tab Michal Neuvirth as their No. 1 goalie and re-sign the 26-year-old Czech in the coming months, remember his 37-save performance in Sunday’s 2-1 shootout loss to the Nashville Predators.

In his fifth straight start, Neuvirth dazzled again, keeping the Sabres in a contest in which they only five mustered five shots through 30 minutes and 17 in 65 minutes.

But seven penalties hurt the Sabres.

“It’s tough to win straight up against a team like Nashville,” Sabres coach Ted Nolan said. “When you add some of the penalties we took – unnecessary penalties – it’s really tough.”

Zach Bogosian’s extra roughing penalty with 5:52 left – the defenseman jumped in before a fight could start – bit the Sabres. Mike Ribeiro tied it on the ensuing power play, capitalizing after the puck bounced to him near the crease.

“Zach didn’t really have to go in there and jump in as much as he wanted to,” Nolan said. “I think the intent was there. But you got to know the score, you got to know the opposition. To get the extra one there was tough. We had high-sticking penalties. I think we lead the league in shooting the puck out of the rink.”

“We took way too many penalties and they got one lucky bounce,” Neuvirth said. “It’s tough to swallow, but it’s definitely nice to get a point against a team like that.”

He added: “We talked about it before the game, we cannot take so many penalties.”

Without Neuvirth, the Sabres could’ve been blown out.

“He’s been fantastic,” Ennis said. “He’s been keeping us in it. He’s such a good goalie.”

Since the Sabres traded Jhonas Enroth to Dallas on Feb. 11, Neuvirth is 1-2-2 with a 1.73 goals-against average and a .951 save percentage. On Sunday, Neuvirth outdueled Nashville backup Carter Hutton, who subbed for Pekka Rinne, arguably the NHL’s best goalie.

“He’s played excellent for us,” Sabres captain Brian Gionta said. “In spurts this year he’s showed that dominance. Since that trade, he’s really taken off and owned it.”

Nolan added: “Michal played a great game again. Every game he’s played since he’s got all the starts he’s been playing really, really good for us.”

“The one thing about our team for the last little while, we’ve been giving everything we have,” he said. “I thought we worked hard. Unfortunately, we took some undisciplined penalties.”

The Sabres’ 17-38-5 record doesn’t justify “who they are as a team,” Predators defenseman Cody Franson said.

“I mean every time I’ve been in here they’ve played very well,” said Franson, who played four seasons in Toronto. “They make you earn what you get. We had to direct a lot of pucks to the net and play a pretty full 60 minutes in order to squeak that point out and take it to extra time. They played us pretty well and earn what we got.”