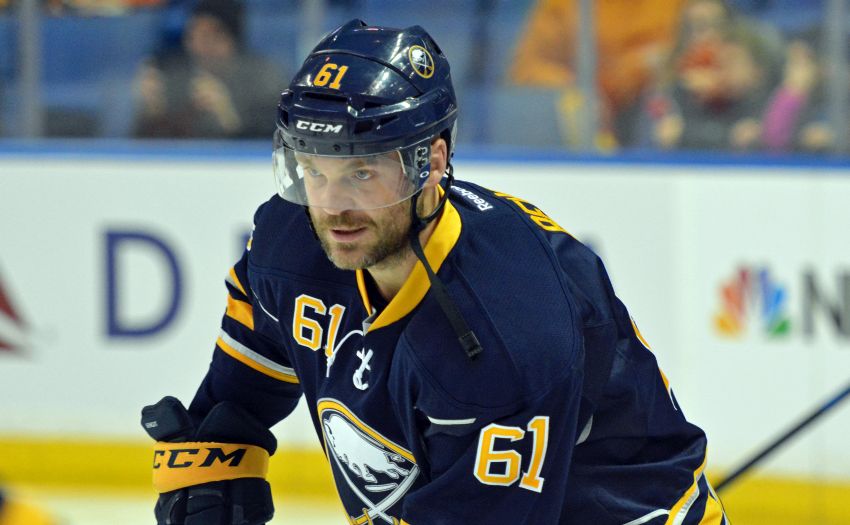 Andre Benoit has been scratched throughout this season. ©2015, Dan Hickling, Olean Times Herald

Benoit, 31, first earned notice two years ago as a late-bloomer in Ottawa. Last season in Colorado, he played more than 20 minutes a night, compiling 28 points.

This season, well, hasn’t been easy for Benoit, who made only his 39th appearance in Friday’s 3-1 loss to the New York Rangers inside the First Niagara Center. The rebuilding Sabres have scratched Benoit 20 times.

“Definitely not the year I envisioned,” Benoit said Friday afternoon. “But at the same time, you can’t look back, you got to keep looking forward. I get a chance to play a bigger role.”

That bigger role has come in the last week beside new acquisition Zach Bogosian. Sabres coach Ted Nolan immediately moved Benoit from the press box to a prime spot beside the aggressive Bogosian.

Benoit, who endured a tough night Friday, played 20 minutes in consecutive games earlier this week for the first time since early November.

“I think Benoit’s probably been playing the best hockey he’s been playing for us all year,” Nolan said. “Is there is a reason for it? Probably. He’s playing with Zach. I think better players make (players better).”

Benoit didn’t know Nolan would put him with Bogosian.

“But I was happy to get the opportunity,” he said.

Why did the pair mesh so quickly?

“I just think we communicate out there,” Bogosian said. “We both like to talk. If anything fails or goes down at all, I think we kind of talk it out out there and sort things out.”

Nolan briefly broke up the duo after defenseman Mike Weber left the game with an upper-body injury.

Sabres defenseman Josh Gorges’ season could be over.

Gorges will decide his future in the next day or two, Nolan said. The veteran is “getting the final information” on the lower-body injury that has sidelined him four games, Nolan said. But the team is planning on playing without Gorges.

In other news, the Sabres made one lineup change Friday, inserting veteran defenseman Tyson Strachan for 19-year-old Nikita Zadorov.

Zadorov recently compiled seven points in seven games. But he’s still a mistake-prone youngster. Nolan has been cutting his ice time to about 15 or 16 minutes a game.

“He’s going to be a heck of a player, he really is,” Nolan said. “But you have to be patient. … You got to me sure you put the kids in a position of success versus failure.”

Sabres goalie Michal Neuvirth made his fourth straight start Friday. The Sabres want to find out if Neuvirth, who has looked sharp since the Sabres traded Jhonas Enroth, can be a No. 1 netminder.

“He’s only played (23) games,” Nolan said. “No. 1s usually play a lot of games, so he’s relatively fresh. He should be able to handle that load.”

Sabres prospect Mikhail Grigorenko, out since injuring his knee Jan. 30 with Rochester, wants to return Friday, according to WHTK. The 20-year-old center has 10 goals and 30 points in AHL 37 games this season.