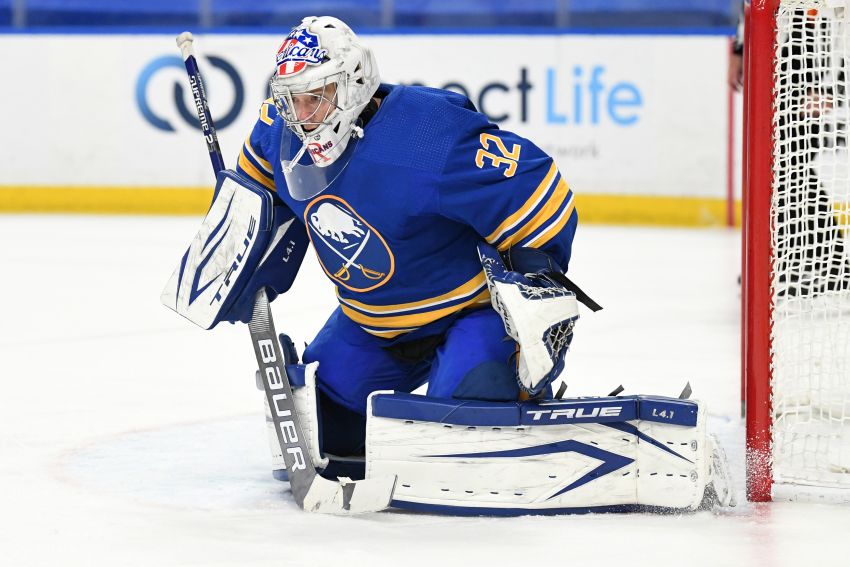 Tonight against the Detroit Red Wings, Houser, 29, will likely back up goalie Aaron Dell for the second straight game. The Sabres play four times in a six-day stretch next week, including a back-to-back set, so Houser could be awarded his fifth NHL start.

By last season, his ninth as a pro, it appeared Houser would never crack the big leagues.

Houser had spent most of the previous five campaigns toiling in the ECHL, making only five appearances in the AHL. While he had a roster spot with the Rochester Americans in 2020-21, he was either serving as a backup or being scratched.

Incredibly, Houser went 422 days between playing games before making his NHL debut May 3.

By now, Houser’s story is well known. The Sabres signed him to an NHL contract in March and assigned him to the taxi squad to be their third goalie.

When Ukko-Pekka Luukkonen and Linus Ullmark suffered injuries and Dustin Tokarski left the Sabres for personal reasons, Houser was the last goalie left. He started the Sabres’ final four games.

Despite his rust, Houser performed splendidly, winning his first two outings and posting a .900 save percentage.

“He looked the same for the Buffalo Sabres last year as he looked for the Rochester Americans, as he looked for the Cincinnati Cyclones, because he prepares every day,” Amerks coach Seth Appert said on a Zoom call Friday. “If he plays in the East Coast League, his level of preparation and work ethic is the same as if he’s in the NHL. And when you attack every day that way, you’re ready for the moment to be called. And that’s a real credit to him and his professionalism.”

Houser said it was special to learn how his first taste of the NHL excited others.

“Just seeing how much it meant to other people and a bunch of my family members, it was cool once I got home and got to see that,” Houser said Wednesday. “It was a cool moment this summer, a couple times.”

Following three seasons in the Sabres organization, it appeared Houser might move on. There was a belief his strong stint in Buffalo and body of work as an elite ECHL goalie might convince a team to give him a two-way contract.

“We looked around,” Houser said of his offseason. “My goal was to try to get an NHL contract.”

An offer never materialized, so Houser settled for another AHL contract with the Amerks and began the season with the Cincinnati Cyclones, the Sabres’ ECHL affiliate.

He was quickly promoted to Rochester, where he played 11 games before the Sabres, who were already down Tokarski and Craig Anderson, lost Luukkonen and Malcolm Subban in Tuesday’s 6-1 loss to the Tampa Bay Lightning.

On Wednesday morning, as the Sabres gathered for practice, Houser jumped on the KeyBank Center ice.

“I have a lot of respect for him,” Granato said. “Because lots of guys, you look at the number of years he didn’t get that opportunity at this level, you see the players … they don’t practice as hard because you’re like, practice is an investment and I’m not getting a return on my investment. So if I keep putting more money in and more investment in am I going to get a return?

“There’s potential that he could be in the lineup because he hasn’t been out as long as some other guys have,” Granato said.

Thompson, who has scored 12 goals this season, entered protocol Monday.