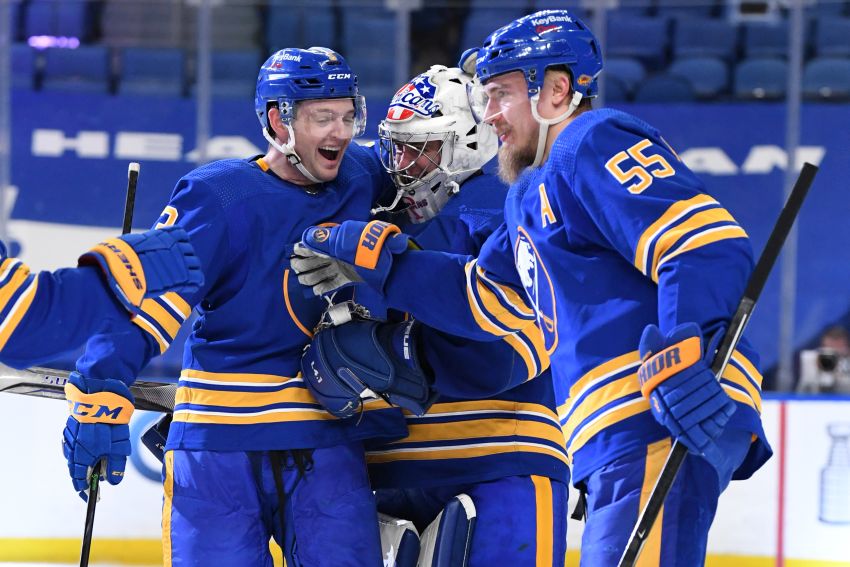 In a dreadful year in which the Sabres could finish dead last again, Houser’s first big league start created a feel-good story that provided some excitement and intrigue to a meaningless late-season game.

Houser, 28, has spent most of his career toiling in the ECHL, playing only 73 AHL contests, including just two in the last five seasons. He hadn’t played a game at any level since March 7, 2020 with the Cincinnati Cyclones, the Sabres’ ECHL affiliate.

Despite the nearly 14-month layoff, Houser he looked terrific Monday, stopping all 15 shots he faced in the third period as the Sabres roared back to beat the Islanders for the first time in seven meetings this season.

When Sabres center Sam Reinhart’s empty-net goal, his second of the third period and 25th this season, sealed the victory, Houser said he felt a sense of “huge relief.”

“It’s so exciting,” Houser said on a Zoom call. “I’ve worked my whole life for this, for it to happen. Just to play a game it’s really special, but to win, winning’s always the goal, that’s why we play.”

When the horn signaled the end of the game, Houser’s ecstatic teammates streamed off the bench and embraced him.

Granato said he was walking to the dressing room but stopped to watch the on-ice celebration inside KeyBank Center.

Sabres winger Tage Thompson said of Houser: “It was awesome, the boys are really fired up for him. He stood on his head, played a great game. I don’t think there’s too many more deserving guys. He’s one of the hardest-working players and goalies I’ve ever been with.”

Houser will have another chance to play tonight. Granato said the rookie will start the home finale against the Islanders. He said Sabres goalie Dustin Tokarski is attending to a family matter and unavailable to play.

Perseverance and a run of goalie injuries helped Houser, who has spent much of this season on the Sabres’ taxi squad, earn Monday’s nod.

Houser, who was recalled from the taxi squad Monday afternoon, became the sixth Sabres netminder to start a game this season.

After beginning the season with Rochester Americans, Houser signed a one-year contract with the Sabres on March 19, his first NHL deal in six years. He has spent most of the past seven weeks on the taxi squad. He has dressed as a backup five times.

Houser, who was informed by assistant coach Mike Bales on Monday morning he would be starting, said he felt a little sloppy in the beginning of the game.

“Which was to be expected, I think,” he said. “I just felt a little bit loose, and I think that goes hand-in-hand with not playing for so long. I told myself this afternoon I would just try find the pucks that were in tight and fight for your ice and just try to keep going.

“I really wasn’t thrilled about either of the goals, but I was happy how I responded after the second.”

Adam Pelech’s first-period goal deflected in off Sabres defenseman Henri Jokiharju’s stick before Oliver Wahlstrom’s redirection 10:42 into the second period made it 2-0.

In between, an Islanders goal was called back for goalie interference.

“It’s super exciting,” Houser said after the Sabres’ four-game losing streak ended. “I’m not really in that great of game shape, either, I’ll admit that. So I … could barely breath, so I’m just trying to catch my breath right now, give my parents a shout after this and see what their take is on it.”