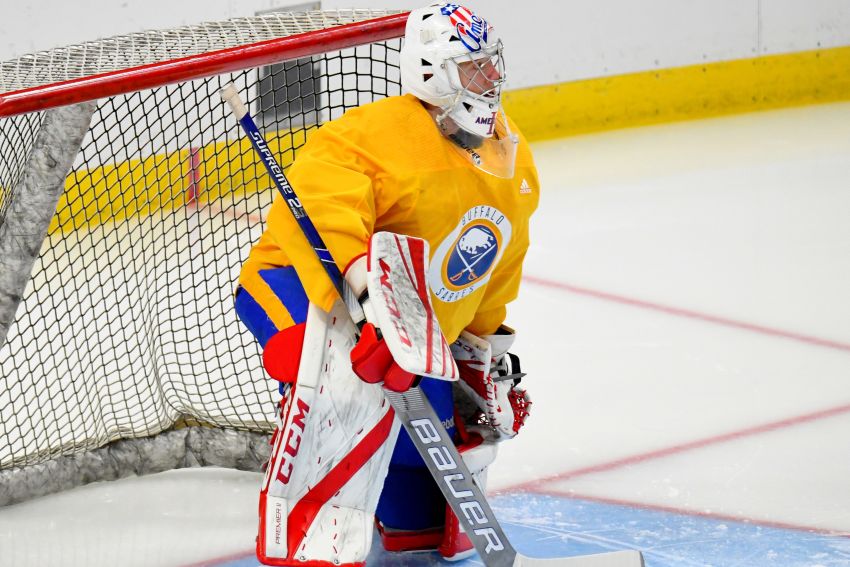 Michael Houser is receiving his first taste of the NHL with Buffalo. ©2021, Micheline Veluvolu

Minutes earlier, Houser, 28, had been watching the action against the New York Rangers from a suite with other members of the team’s taxi squad.

Then Carter Hutton suffered a lower-body injury less than three minutes into the game, meaning Houser, the emergency backup, had to rush downstairs and get ready.

“I had no idea, obviously, how to get down to the rink then,” Houser said of his mad scramble.

When Houser got downstairs on March 22, he quickly put on his gear – he said he can get ready in about 12 or 13 minutes – and watched the rest of the Sabres’ 5-3 loss in the dressing room. NHL rules prohibit emergency goalies from sitting on the bench.

That night marked the first of eight times Houser, who has spent most of his nine-year career in the ECHL, has dressed as either the Sabres’ emergency or regular backup.

Prior to this season, Houser, a decorated junior star with the London Knights, had never spent any time in the NHL. He played for the Cincinnati Cyclones, the Sabres’ ECHL affiliate, the last two seasons.

Houser hadn’t even signed a big league contract since his entry-level deal with the Florida Panthers expired in 2015.

But the Sabres inked Houser to a one-year NHL contract on March 19, a day before they traded goalie Jonas Johansson to the Colorado Avalanche. Then they recalled Houser from the Rochester Americans to the taxi squad. NHL teams must carry three goalies this season.

“It was exciting, for sure, I obviously wasn’t expecting it,” Houser said of his contract. “I haven’t played a hockey game this year yet, so it really wasn’t that expected.”

Incredibly, Houser hasn’t played a game since March 7, 2020 with Cincinnati, which opted out of this season. He started this year in Rochester but was stuck behind prospect Ukko-Pekka Luukkonen and veteran Dustin Tokarski and did not play.

After Hutton was injured, Houser dressed as a regular backup for the first time March 23 in Pittsburgh, his hometown, with his parents, Bill and Monica, in the PPG Paints Arena stands.

“That was really fun,” said Houser, whose family had Penguins season tickets at the old Mellon Arena. “The very first game, you look over, you see (Sidney) Crosby warming up and all that. And that was a blast. It’s just weird, because I remember when they first came up.”

Houser has dressed as a bench backup four other times, including another game in Pittsburgh. After Hutton was hurt, goalie Linus Ullmark suffered a lower-body injury April 13.

Luukkonen suffered an undisclosed injury in Saturday afternoon’s 6-2 loss to the Boston Bruins, so Houser could back up Tokarski tonight against the New York Islanders in KeyBank Center.

When Luukkonen departed the game after the second period, Houser was downstairs working out in TD Garden, so he simply got dressed and stayed in the locker room.

“It’s been a little bit of a weird year … not getting any games yet,” Houser said. “But definitely cool experiences.”

The 6-foot-1, 185-pound Houser could finally play some games soon. The Amerks have four games scheduled after the Sabres’ season ends Saturday. If Luukkonen is still injured, they could assign Houser to Rochester for some late-season action.

Houser’s former status as an elite junior goalie and his ECHL exploits haven’t earned him much AHL action.

The undrafted Houser was named the Ontario Hockey League’s Most Outstanding Player after a 46-win season in 2011-12. Luukkonen (2018-19) and Edmonton Oilers superstar Connor McDavid (2014-15) also won the award.

Many teams have a prospect and a veteran with NHL experience on their AHL affiliate.

But Houser has mostly toiled in the ECHL, becoming one of the league’s top netminders. In 210 career outings, he has compiled a terrific 127-57-22 mark, a 2.47 goals-against average and a .915 save percentage.

“Things do have to fall your way sometimes,” said Houser, who attended the Sabres’ development camp in 2011. “You need chances because of an injury or a call-up or what have you. I’ve just been kind of waiting my turn, and I’m making sure that when it does come I’m ready for it.”