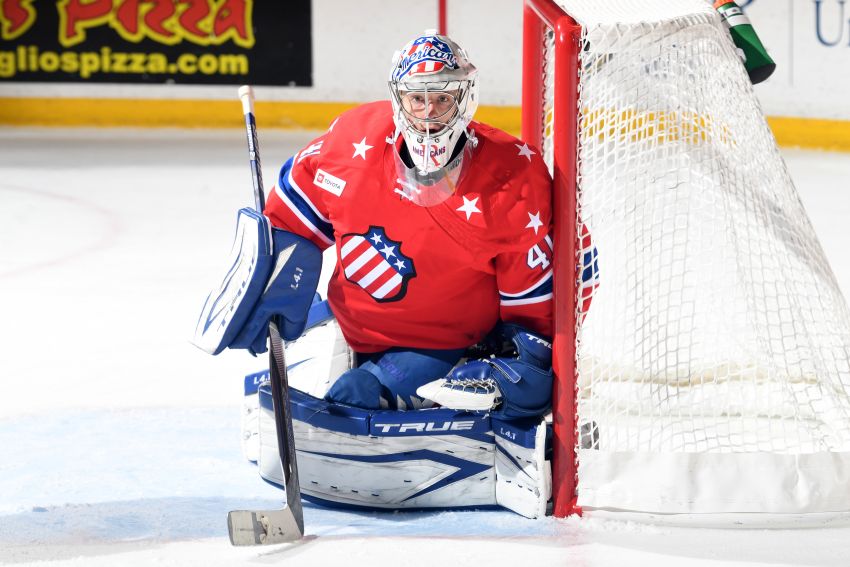 ROCHESTER – Coach Seth Appert felt his goalie, Michael Houser, deserved to take over the Americans’ net in the final days of the season.

For years, Houser, who played four late-season games for the Buffalo Sabres, toiled in the ECHL. While he just completed his third season in the organization, he hadn’t played a game for the Amerks until a week ago.

Before earning his first NHL action earlier this month, Houser, 28, spent most of the past two seasons with the Cincinnati Cyclones, the Sabres’ ECHL affiliate.

So when an opportunity materialized for Houser to play four games in five days for the AHL club, including three in three to close the season, Appert ran him ragged.

“With what Michael Houser has done for this organization this year but also for previous years in Cincinnati and when he’s been called up here practicing, (he deserved it),” Appert said on a Zoom call Sunday. “I thought he had earned that opportunity and that right to go as long as he said his legs could take.”

On the morning of each game with the Amerks, Appert would grab Houser to see how he was feeling. They had their longest conversation prior to Sunday’s season finale.

By late in Saturday’s 5-3 loss to the Syracuse Crunch, Houser said he was feeling lethargic. But the next morning, he felt ready to go.

“You just have to convince yourself that you can get through it and you do have enough energy and each save you just kind of reset for the next one,” Houser said after making 29 saves in Sunday’s 2-1 win over the Utica Comets inside Blue Cross Arena.

Houser ended a crazy season and the wildest two weeks of his career on a high note, earning his first AHL win since Jan. 17, 2016.

Sunday’s outing was possibly his last game in the organization. Houser could parlay his short but impressive run in the NHL into a significant raise and an AHL job next season.

The one-year, $700,000 contract Houser signed March 19 was his first NHL deal since his entry-level contract expired in 2015. In the minors and on the taxi squad, where he spent seven weeks, he earned only $55,000, according to capfriendly.com.

Houser could receive a two-way contract with a six-figure minor league salary. Having proven he can handle playing in the big leagues – he dazzled in his first two starts, winning both – teams might envision him as the No. 3 goalie in their organization.

Houser, an elite ECHL goalie, played more AHL games in a four-day stretch than he had over the previous four seasons (just two).

“I would, I guess, need a little bit of time to think about it,” said Houser, who compiled a 2.33 goals-against average and a .924 save percentage with the Amerks. “I’ve just been putting the blinders on the last few weeks, just because my personal season’s been so condensed. … It’s just happened so fast, and it’s been eight games in two weeks.

“So I think I’m just going to kind of take a step back, but I would hope that my play over the last few weeks and my body of work over the last few years has shown that I can play in the American League and, if needed, the NHL.”

The Sabres likely don’t have room for Houser, unless he wants to return to Cincinnati, which is unlikely.

Top goalie prospect Ukko-Pekka Luukkonen will almost certainly be Rochester’s starter next season. Veteran Dustin Tokarski, who played 13 games for the Sabres, has one year left on his contract and could be the Amerks’ other netminder.

The Sabres want to re-sign No. 1 goalie Linus Ullmark. They will probably need to find an NHL backup. They likely won’t bring back graying veteran Carter Hutton.

Having finished dead last, the Sabres have the highest NHL Draft Lottery odds, 16.6%, for the top pick, the league announced Wednesday. They can pick no lower than third overall July 23.

The lottery will be held June 2.