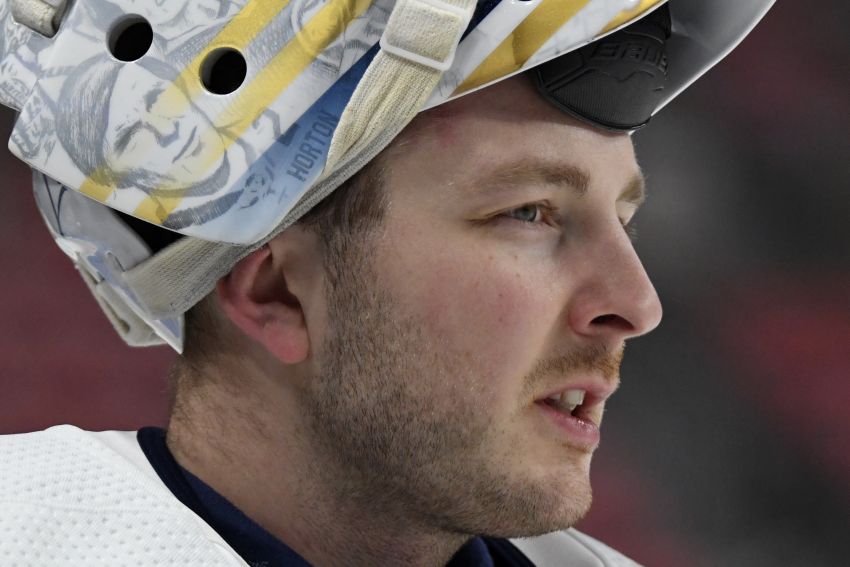 BUFFALO – When defenseman Rasmus Dahlin joined the Sabres three years ago, goalie Linus Ullmark took a special interest in helping his fellow Swede acclimate to the rigors of NHL life.

Ullmark mentored Dahlin, a first overall pick under intense pressure to perform well. Over the years, they grew close, developing a special friendship.

“He was like an older brother, he was great,” Dahlin said Thursday after the Sabres prepared to face Ullmark’s Boston Bruins at KeyBank Center. “We had a great relationship.”

Ironically, tonight’s game will be Ullmark’s first appearance with the Bruins after signing a four-year, $20 million contract as a free agent July 28. The Sabres, meanwhile, are gunning for their first 4-0 start since 2008.

Even early last season, it seemed unlikely Ullmark would leave Buffalo. After paying his dues and moving up in the organization – he was drafted in 2012 and arrived in North America in 2015 – he was beginning to reach his potential as a No. 1 goalie.

“There were some things that we couldn’t meet eye-to-eye (on) and that’s what happens,” Ullmark said Thursday. “And then when Boston came knocking, it felt like a good decision to go to a contender and a great franchise, a great team, good teammates all around.”

“I will do everything I can to score because I like scoring on him,” he said.

Why does Dahlin want to score on his friend so badly?

Ullmark said: “If they start talking, I’ll talk, too. But I’ll just try to keep it to myself. I don’t want to get too riled up.”

“I take pride in that,” said Ullmark, who hasn’t played since his final preseason appearance Oct. 6. “I want to be a guy that you can rely on on and off the ice because I know, especially after last season, how tough it can be when things get tough for you off the ice.”

By last season, when the Sabres won just 15 of their 56 games, Ullmark had morphed into their backbone and MVP, compiling a 9-6-3 record and a .917 save percentage. If he hadn’t suffered a lower-body injury Feb. 25, they likely wouldn’t have endured an embarrassing 18-game winless streak.

Ullmark said leaving the Sabres to join their Atlantic Division rival hit him when he called some friends to inform them.

“I made some phone calls to some of the persons that were close to (my) heart and really let them know how much they meant to me and what they’ve helped me through the years,” he said. “And I’m very thankful for their support.

“So once I started doing that, that’s when it actually hit me that was about to leave and there were some tearful goodbyes, whatever. But now when I see them up close again and they’re cheerful for me, I’m cheerful to see them. I still have lots of respect and a lot of gratitude toward everybody in this organization.”

In Boston, Ullmark has entered a radically different situation than what he experienced in Buffalo over parts of six seasons. As a $5 million player on a powerhouse team, the expectations are much higher.

Ullmark, however, said he won’t change.

“I’m the same guy with a different paycheck, that’s it,” he said. “It’s nothing going on and off the ice that I haven’t done before and that’s what got me here. So if I start doing something else … I’m not going to be in the league for (much) longer.”

So far, Ullmark hasn’t established himself as the Bruins’ No. 1 goalie. Jeremy Swayman started their first two games. Swayman, 22, has only played 12 NHL contests.

“That’s (Ullmark’s) most important relationship a lot of times, how you get along with two guys we see as our future,” Bruins coach Bruce Cassidy said. “They seem to be in a good place with one another, competing with one another knowing that the net’s available.”

Ullmark had a tough preseason, posting an .839 save percentage in three games. In is first outing Sept. 28 against the New York Rangers, he telegraphed the puck to Alexis Lafreniere in overtime, giving him an easy goal.

Cassidy said Ullmark facing his old team in his debut is simply “the way everything fell.”

“Swayman had a good opener,” he said. “We felt he was a little ahead. We put him in the opener, had a good, solid game.”