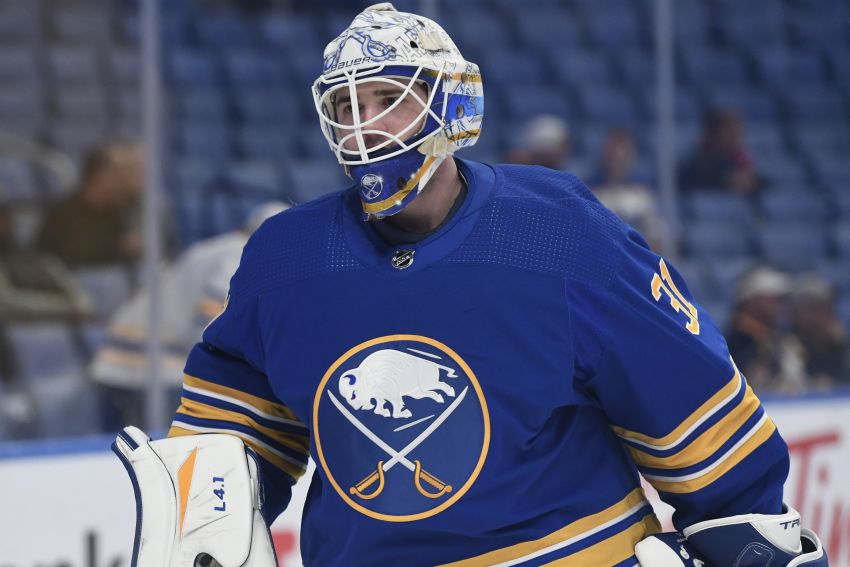 PITTSBURGH – When the Buffalo Sabres signed Dustin Tokarski last year, he was expected to offer them depth, most likely in the minors. He hadn’t played an NHL game since a brief relief appearance in 2016. He hadn’t earned a win since 2015.

Few figured Tokarski, a decorated AHL netminder, would receive significant action with the Sabres, let alone become one of their most important players. But incredibly, Tokarski, 32, is starting to emerge as the rebuilding team’s backbone.

In Tuesday’s 2-1 win over the Pittsburgh Penguins, Tokarski performed brilliantly, making a career-high 45 saves, including 19 during a wild third period. The Sabres mustered only 19 shots during the entire game.

“He was our No. 1, 2 and 3 star,” Sabres winger Kyle Okposo said of Tokarski. “(The) third period was really ugly from a team standpoint and he won that game for us in the third.”

The Sabres started well inside PPG Paints Arena, taking a 2-0 lead into the third period. Defenseman Colin Miller’s goal 28 seconds into the second period opened the scoring before Okposo put them up 2-0 at 8:54.

Then the Sabres imploded in the third period, sprinkling just three shots on Penguins goalie Tristan Jarry. It took them 12:07 to register their first shot.

They even allowed high-quality chances on a power play.

“I’m glad we has a two-goal lead and Ticker in net,” Sabres coach Don Granato said. “I mean, it was Ticker’s show from that point, starting right away. I’m pretty certain we gave up more quality chances against on the power play in the third than we did in the first two periods five-on-five, and so it was just the start of it.

The Penguins, meanwhile, kept pummeling the Sabres. Jake Guentzel’s power-play goal broke up Tokarski’s shutout bid at 5:59. But after a series of huge stops, including a breakaway save on Teddy Blueger, Tokarski bested Guentzel late, making two point-blank saves with 20 seconds left before the crowd of 16,366 fans.

“We trust our guys and I thought they were awesome tonight,” said Tokarski, who has been subbing for injured starter Craig Anderson. “They paid the price and the goalie’s got to make a few saves. That’s just what it is in this league. I thought the guys did a heck of a job letting me see the puck.”

About 15 minutes after perhaps Tokarski’s best night in the NHL, it was hard to tell if he won or lost. Instead of accepting any praise, he deflected toward his teammates.

“The teams and players that manage ups and downs better than the next progress,” Granato said. “He exemplifies that. He never gets too high, never gets too low, especially in that position.”

Tuesday was Tokarski’s eighth appearance this season and 21st since last year. After a breather Saturday – Aaron Dell replaced him for a 5-4 loss to the Toronto Maple Leafs – Tuesday’s start was Tokarski’s fifth in six games.

Tokarski said he has never felt in a rhythm like this during his NHL career.

“You can say that,” he said. “I’m enjoying it. We have a great group of guys, we have a good staff. Going to the rink every day is a lot of fun. I think when you have that kind of group, it just makes playing games and practices and being around the team just a lot of fun. Maybe that’s what’s translating to a little more success.”

Tokarski has been successful from the get-go this season. He beat out Dell for the backup job during the preseason and has given the Sabres a chance to win every game he has played.

Overall, Tokarski has compiled a 3-3-2 record with a 2.71 goals-against average and a .920 save percentage.

“He has been really solid for us all the way from the first day of camp,” Okposo said. “You can see it in practice. Every little puck, every second puck, third puck he’s competing hard. It definitely shows in the games.

“We just want to continue to put a good effort in front of him, but we know we’re a confident bunch when he’s back there.”

The tight win, which pushed the Sabres over .500 (7-6-2), was just their second road victory this season.