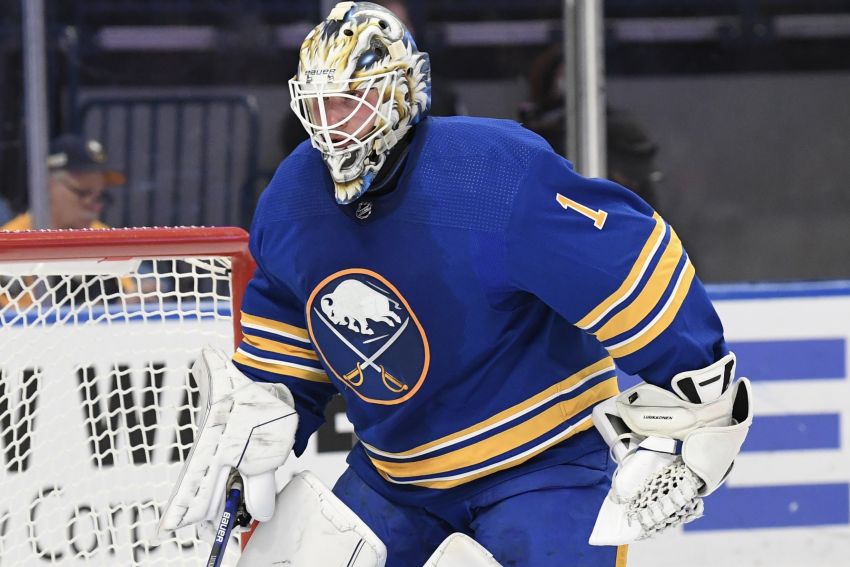 BUFFALO – Suddenly, having lost Ukko-Pekka Luukkonen and Malcolm Subban to injuries in the same game, the reeling Sabres find themselves in a goalie crisis.

Luukkonen, the Sabres’ backbone during his nine recent outings, will likely be sidelined at least a few weeks with a lower-body injury he suffered early in Tuesday’s 6-1 loss to the Tampa Bay Lightning, according to general manager Kevyn Adams.

His replacement, Subban, sustained an upper-body injury – Adams said it’s more severe than Luukkonen’s – and will miss at least a month.

So tonight against the Nashville Predators, a scorching team that has won 12 of its last 14 contests, the Sabres must utilize a goalie tandem of Aaron Dell and Michael Houser.

Dell, who will likely start tonight, endured some rough outings earlier this season, compiling a ghastly 0-5-0 record. The Sabres’ depth is so depleted on Wednesday they signed Houser to an NHL contract so they have two healthy netminders.

The Sabres, who have a six-game winless skid, had no other options.

It’s unclear when Luukkonen, 22, was injured. He left the game following the first period. He’s listed as week to week on the team’s injury report.

Luukkonen, a prospect regarded as the Sabres’ goalie of the future, performed splendidly in nine outings since the Sabres recalled him last month. The Finn compiled a 2-5-2 record with a 2.74 goals-against average and a .974 save percentage.

“UPL had been in the zone,” Granato said.

Meanwhile, Subban, 28, was injured when 6-foot-3, 238-pound Lightning winger Patrick Maroon fell on him 16:21 into the second period. Subban was clearly in pain – he appeared to suffer a hand or wrist injury – but gutted out the rest of the game.

“Malcolm battled it out,” Sabres defenseman Rasmus Dahlin said. “He got injured in the second period and he backed us up the whole game. I really appreciate that.”

Subban, who was acquired from the Chicago Blackhawks on Dec. 2, made 10 saves in the third period.

“He’s proven that he’s a team guy,” Granato said. “He works hard for his teammates. He cares about his team and teammates and that was a perfect example last night.”

If Subban left the game, the Sabres likely would’ve been forced to use Travis Moore, an emergency backup goalie who has practiced with them this season.

Granato said the Sabres did not know yet if Subban needed surgery. He’s listed as month to month on the injury report.

Dell, who was recalled from the Rochester Americans, Houser and goalie Dustin Tokarski all practiced Wednesday inside KeyBank Center.

Tokarski, however, hasn’t been cleared to play since testing positive for COVID-19 on Dec. 2. He started practicing again Dec. 27.

Granato said Tokarski, 32, won’t be available until he’s “fully himself, from a health standpoint.”

“Which could be soon,” Granato said.

After Anderson’s injury created an opportunity for Dell, he struggled, compiling a 4.52 goals-against average and an .872 save percentage in seven games before the Sabres demoted him.

In Rochester, however, he has played well, registering a 5-0-0 mark with a 2.76 goals-against average and a .910 save percentage in five outings.

When Granato watched Dell, 32, play Friday in Rochester, he said he “looked like a different guy.”

“I’m not so sure we saw him and what he is,” Granato said of Dell’s first stint in Buffalo. “He struggled early. There’s no question. But I think he is better than he showed and he’s shown going to Rochester that he looks like a different guy. He even looked like a different guy at practice.”

Dell said he has started “to get into a bit of a groove.”

“With the last few years, I haven’t been playing a ton of games and, I think, getting that game experience back in the last little while has really helped me get back to where I want to be,” said Dell, who was recently away from the Amerks when his wife, Kelly, gave birth to a son, Jaxon.

Dell said during his first recall, he was “chasing” the game.

Houser, who started the Sabres’ final four games last season, his first NHL appearances, has played 11 games with the Amerks this year, compiling a 5-4-0 record with a 2.98 goals-against average and a .900 save percentage. He also played two contests with the Cincinnati Cyclones, the Sabres’ ECHL affiliate.

Last season, the Sabres signed Houser, 29, to an NHL contract in March so he could serve as their taxi squad goalie. When Tokarski had to leave the team, the Sabres turned to Houser, and he won his first two starts.

“Houser was an inspiration last year and did exceptionally well,” Granato said. “He’s an overachiever and that’s exactly what we’re about right now and what we need.”

Houser said he looked for an NHL contract as a free agent during the summer.

“It didn’t happen this offseason but obviously it happened today, so things happen for a reason,” he said. “I’m very grateful for the Sabres organization. They gave me my first chance in the NHL and have still been giving me chances. It’s my job to take these chances and try to run with them as best I can.”

With Dell and Houser gone, the Amerks recalled goalie Mat Robson from Cincinnati.