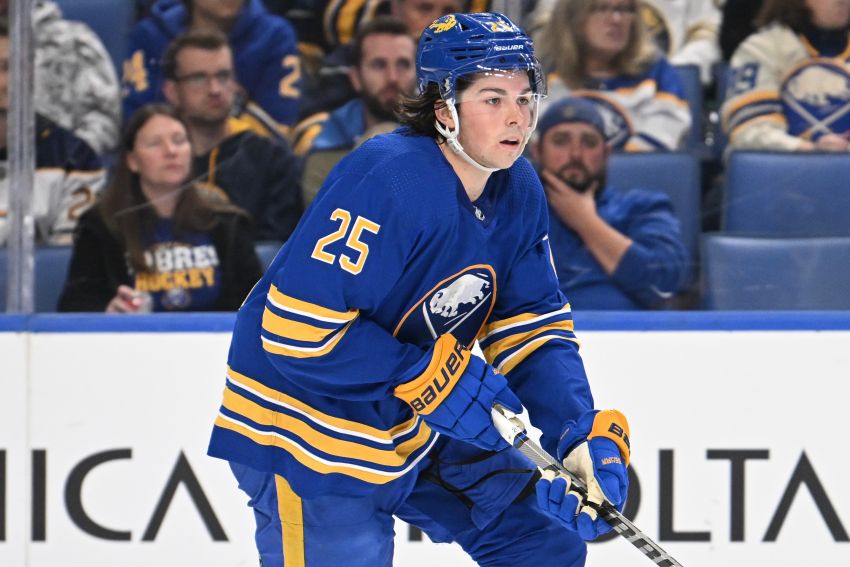 Owen Power has been playing big minutes as a rookie. ©2022, Micheline Veluvolu

BUFFALO – Sooner than later, Sabres rookie Owen Power was expected to play mega minutes and emerge as a workhorse on the blue line.

But just 20 games into his NHL career? Well, Power skated a personal-high 28 minutes, 14 seconds in Saturday’s 5-3 road loss to the Tampa Bay Lightning.

Through 12 outings this season entering tonight’s contest against the Arizona Coyotes at KeyBank Center, he has averaged 23 minutes, 9 seconds of ice time, the highest total among NHL rookies.

Injuries, of course, have forced the Sabres to rely more heavily on Power. Right now, defensemen Rasmus Dahlin, Henri Jokiharju and Mattias Samuelsson are all sidelined. Ilya Lyubushkin just returned to the lineup.

Sabres coach Don Granato said “there’s a chance” Dahlin, who was sucker punched by Jesperi Kotkaniemi in Friday’s 5-3 road loss to the Carolina Hurricanes, could play tonight. He finished the game, skating 26 minutes, 58 seconds and scoring a power-play goal with one second left in the third period.

An upper-body injury forced him to miss Saturday’s contest.

The Swede, who’s day to day, did not practice Monday. Late in the session, he appeared in the tunnel and watched his teammates for several minutes.

Dahlin, 22, has established himself as an early Norris Trophy candidate, recording seven goals and 15 points in just 11 games. He has averaged a whopping 25 minutes, 54 seconds of ice time, the NHL’s fifth-highest total.

Still, when Dahlin and the other injured defensemen return, expect Power, the first overall pick in 2021, to keep earning huge minutes.

“You can say he’s a 19-year-old player, or 19-year-old kid, he is, but it’s how good is he and how effective is he?” he said following Monday’s practice. “How intelligent is he? How skilled is he? You look at those traits, it’s not hard to see why he can play 28 minutes. You sort of throw the age to the side because the age is not a factor. It’s, can he do it? Does he have the skill to do it? The presence and the calm to do it? The awareness to do it?”

The 6-foot-6, 218-pound Power performed superbly in Saturday’s game, registering a team-high 73 percent Corsi For and assisting on two goals. He created winger Zemgus Girgensons’ first-period score by carrying the puck into the Tampa Bay zone. In the second period, center Casey Mittelstadt tipped his point shot in.

Power has already recorded seven assists, the Sabres’ second-highest total. At his current pace, he would produce a hefty 48 this season.

The youngster has stood out from the get-go, a rarity for a teenage defenseman. Still, adjusting to the big leagues hasn’t been as easy as he might make it look.

While he has always received loads of ice time, the grind of the NHL makes the minutes more difficult to handle.

“You kind of just got to manage your body better, take care of it, kind of take your rest when you can,” Power said. “Obviously, it’s a lot different than college, playing pretty much every other day with travel. I think a lot of it has to do with kind of managing your body and what you eat and just making sure you get your rest.”

Defensively, Power said he has watched video and made better reads in games to improve his gaps. Even at his size, if he’s off, the opposition can exploit him.

“I’ve been, I think, better with my gaps and stuff,” he said. “… A lot of my game comes from how well my gap is. I thought at the start of the year it was pretty bad and it’s trending in the right direction right now.”

Power is just one of a few defensemen who has taken on additional ice time as the Sabres wait for some regulars to return.

Jacob Bryson, 24, played a career-high 26 minutes, 15 seconds on Saturday. A few weeks ago, he was skating about half that amount. Granato said the 5-foot-9, 176-pound Bryson, one of the NHL’s smallest defenseman, has become more adept at killing plays.

Meanwhile, Kale Clague, 24, played a season-high 21 minutes, 14 seconds while spending most of Saturday’s game partnered with Power. Clague and defenseman Lawrence Pilut, who has played the last seven games, both began the season in the minors.

“You’re kind of playing as underdogs in a sense,” Bryson said of the challenge the defense corps has embraced. “We’ve got a couple new guys here, which has been awesome. They have opportunity as well. I think we’ve done a really good job and I’m really impressed with these guys who have stepped in.”