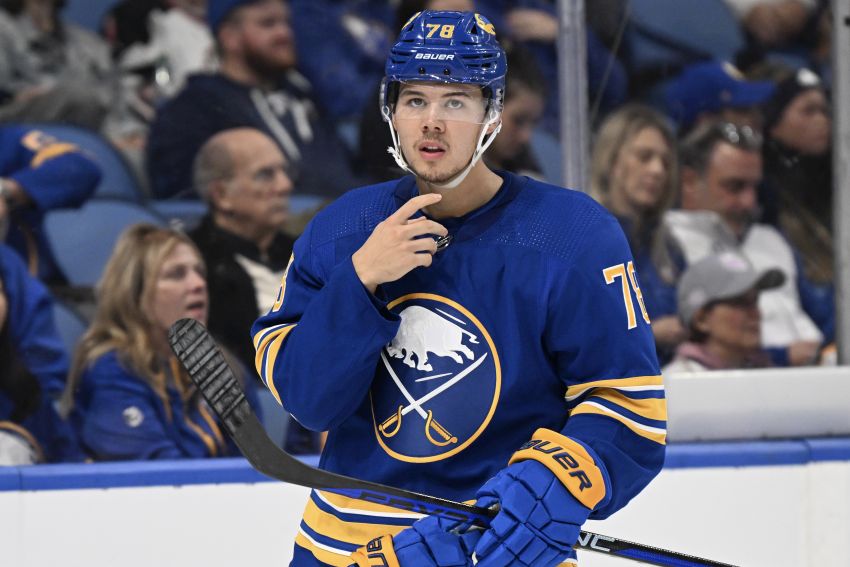 BUFFALO – Just nine games in, the Sabres have already dipped deep into their defense reserves. Hours before Monday’s 8-3 win over the Detroit Red Wings, they recalled Jeremy Davies from the Rochester Americans.

Davies, 25, is the ninth defenseman who has been on the roster this season.

“We’re banged up on the back end and that’s the need, pressing need right now,” Sabres coach Don Granato said Monday prior to Davies’ recall.

They summoned Davies, who played 22 games with Nashville Predators over the past two seasons, because they’ve lost three of their top six defensemen to injury.

The Sabres had only six healthy defensemen before Davies’ arrival.

Lyubushkin’s injury – he blocked a shot Oct. 18 – forced them to add Davies. After missing one game, Lyubushkin returned, gutting out the next three contests. But the Sabres shut the Russian down before Saturday’s 4-3 overtime win against the Chicago Blackhawks so he could heal.

“Over the next couple days we’ll just keep monitoring it, see how he responds without the pressure, physical pressure on the point,” Granato said inside KeyBank Center.

“He worked hard to try to play and just couldn’t and re-aggravated things as he’s pushing on it the way he was,” he said. “So he is not happy he’s not playing. And he has a very high pain tolerance which enabled him to play through some. But again, we want to get that down as much as we can so he can get back to full mobility, full function.”

Meanwhile, Granato said Jokiharju, who was hit in the face with the puck Oct. 20, is getting closer to returning to practice.

“Every day I see him his smile’s getting bigger and bigger, so he’s close,” he said. “Whether that means the next three or four days or the next six or seven days, I think it’s going to be one of the two.”

The 5-foot-11, 190-pound Davies, who signed a one-year, two-way contract on July 13, did not play Monday. He was pointless in seven outings with the Amerks this season. He spent his first three pro seasons in Nashville’s organization.

The Sabres waited until forward Riley Sheahan cleared waivers and was assigned to the AHL before adding him.

They had already recalled defensemen Kale Clague and Lawrence Pilut from Rochester. Amerks defenseman Chase Priskie, a top recall candidate, is injured. Davies and Oskari Laaksonen were the only healthy defenders in Rochester on NHL contracts.

With half of the blue line out, Sabres defenseman Jacob Bryson has seized a leading role on the top pairing beside Rasmus Dahlin.

The 5-foot-9, 176-pound Bryson has quietly developed into one of the Sabres’ most reliable defensemen over the past year.

“The way he works, he just keeps getting better,” Granato said. “And I say ‘works’ in the game, but he watches the film after. Him and (coaches) Marty Wilford and Danny Girardi will sit down after every game and go through his scenarios as they do with each D. He internalizes that well. He’s intuitive enough to figure out, ‘OK, what can I do better? What can I take advantage of with my skill set?’ Which would be quickness and assertiveness.

“He continues to add to his game and that is because of his competitiveness. And he’s a very talented kid so that adds to it as well.”

Of course, playing next to Dahlin, a budding superstar, is a coveted assignment.

“It’s so much fun seeing what he can do out there,” Bryson said. “I give him the puck a lot of the time he makes a pretty play. But, yeah, it’s so easy to play with him. He’s such a confident player, and I always know if I make a mistake he’s back there to cover me.”

The Sabres made one lineup change up front against the Red Wings, continuing their forward rotation by inserting Rasmus Asplund for Vinnie Hinostroza.

Hinostroza sat out the first two games this season.