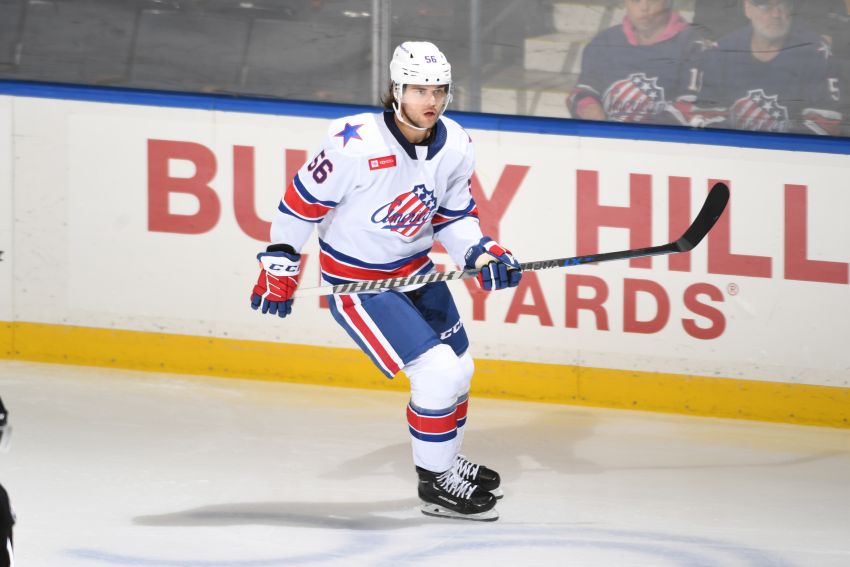 BUFFALO – Having shuttled between the NHL and minors for four seasons, Sabres newcomer Kale Clague understand his role as a depth defenseman.

Despite enjoying a strong training camp, Clague, 24, started the season with the Rochester Americans as the eighth or ninth defenseman in the organization.

Given the rugged nature of the position, it seemed likely the Sabres would need Clague at some point, and sure enough, the Sabres recalled him on Sunday after losing defensemen Mattias Samuelsson and Henri Jokiharju.

After sitting out two games earlier this week, Clague will replace Lawrence Pilut tonight against the Chicago Blackhawks at KeyBank Center.

Update: Defenseman Ilya Lyubushkin will miss tonight’s game because of a lower-body injury, the Sabres announced. Pilut will replace him.

“Any time you get a chance to play in the NHL it’s obviously really exciting,” said Clague, who signed one-year, two-way contract in free agency. “I came here with hopes and expectations to get in.”

The 6-foot, 190-pound Clague has played 58 NHL games, including a career-high 36 last season with the Los Angeles Kings and Montreal Canadiens.

“He’s played a lot of games, last season specifically,” Sabres coach Don Granato said. “His skating, his competitiveness (stand out) and he had a good camp. So it’s a good opportunity for him to jump in.”

“There’s a lot of skill up front and on the back end, so my job is just to get the puck, move it into their hands and they’ll take care of the rest,” he said.

Clague will slot in next to Ilya Lyubushkin.

In other lineup news, goalie Craig Anderson will start tonight, his third nod this season. Anderson, 41, began his career with Chicago in 2002-03.

Winger Rasmus Asplund will be the odd forward out for the second straight game.